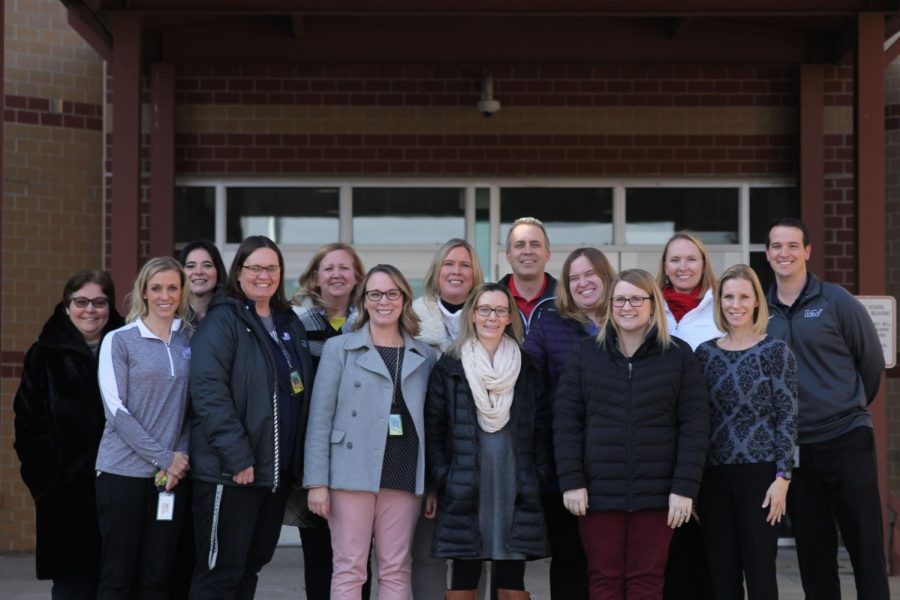 The team, established for the accreditation process, offers a cross-disciplinary approach to leadership

If, one year ago, teachers from all across the school were thrown into one room, the conversation would most likely have been limited. However, after an executive leadership team was established, teachers and faculty found themselves interacting with each other in new ways and bonding as a unit, creating a cross-disciplinary approach to bettering the school.

As a part of the accreditation process, a series of teams were formed to ascertain and implement ways to challenge students and meet each of the criteria on the state Board of Education’s rubric. To get a variety of perspectives, the team “constitutes of administrators, counselors and a variety of teachers from all across the school,” according to counselor Chris Wallace, and is requisite for each school in the district.

“The district is required to implement new procedures [so] that community members, students [and] staff all have a say in how things are being done,” Wallace said. “We sort of shed our identities of counselor or teacher and become building leadership team members. It’s more overarching concepts that we’re trying to work on.”

For technology teacher Helga Brown, the diverse range of faculty on the team afforded opportunities to bond with other teachers and gain a larger picture of the building.

“I’m usually pretty introverted, but because of [the team] I now have some larger relationships with some of the people on the team. We have a lot of fun, we had a big scavenger hunt activity where we got a little crazy with it,” Brown said. “It was nice being able to let loose a little bit, and the things we talked about in the leadership meeting helped us see a greater picture of where we’re trying to go in the district.”

Although the team is in its early stages, senior Makayla King has seen an impact on Brown’s leadership style in the classroom as a result of her work with the team.

“A lot of times, [students will] be complaining about doing research or writing an article, and Ms. Brown … [will] say that it’ll help them in the long run with college or it’ll help them in their career,” King said. “She’ll explain why they have to do it, rather than just saying, ‘stop complaining,’ like most teachers do, or she’ll explain that you have to write this essay because it’s in the curriculum, so you have to do it.”

Having a greater picture of the curriculum, as well as interacting with a wider range of teachers, has been helpful for not only Brown, but for Wallace as well.

“Going forward, as a district, as a staff, whenever you have the opportunity to have mentors or leaders who can be role models for other teachers, that’s usually very helpful,” Wallace said. “The more leaders you can have, the more people who can be leaders for years to come, the better off the district will be. So it’s an empowering opportunity for the teachers and for all of us to take the vision that the district is setting us up for and trying to implement that within our building.”

Additionally, Brown feels that the opportunity to connect with other teachers can strengthen staff bonding, making the school’s faculty stronger.

“The lower C hall teachers pretty much are a group, and that’s because we have the same lunch together and we’re geographically together. [Engineering teacher Gayle] Kebodeaux and I know a lot about each other because we’re right next door to each other. Steiner and I have a pretty good relationship,” Brown said. “This opened it up so I was talking to [staff] like [social studies teacher Jeff] Wieland. I never see Mr. Wieland because he’s on the other side of the building, so this kind of opened up some conversations … [science teacher Jill] Lloyd, same thing. If we’re both in the copy room together, we’re going to talk, it’s not just going to be awkward silence.”

Opening up the executive decision-making process to more teachers has allowed Brown to understand the value of her work.

“I think what frequently happens in education settings is that you have the central office making decisions and then they tell the administrators, and then the administrators tell the teachers and the teachers are kind of [like], ‘we’ve got to check these boxes before summer vacation,’” Brown said. “By having teachers on this committee … we have insight and we can say, ‘well actually, this is part of this, and it all feeds into the great scheme of things.’ Your peers are saying, ‘it makes sense, in the scheme of things. It’s not just busywork.’”