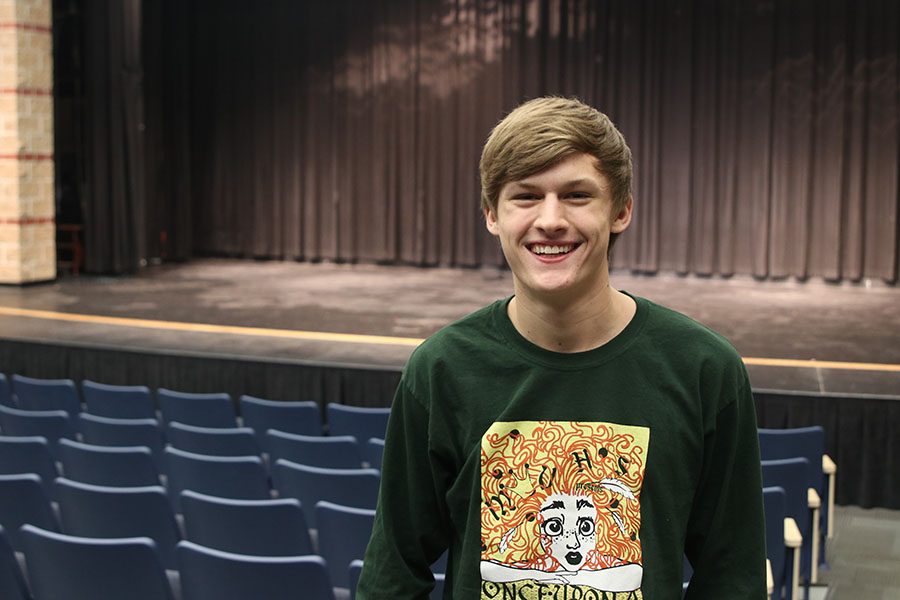 Throughout his four years at Mill Valley, senior Blake Aerni has participated in many different shows in the drama department. “ I [have] always enjoyed singing and [I] thought that it would be a [good] way to use [my] talent,” Aerni said.

Blake has been in five productions and is a Thespian, however, theater hasn’t always been his focus. Before he was in sixth grade, it was sports.

“I would say [the transition] was interesting because the people are a lot different in theater than they are in sports, and it’s not quite as intense,” Blake said. “It was a big change and it was nice because it was a relief.”

Blake experienced difficulties toward the beginning of his transition because of how his sports acquaintances viewed theater.

“Theater does push me sometimes. It’s not an easy task to go on stage and perform,” Blake said. “[The transition] was difficult because people I played sports with sometimes thought of me differently when I performed.”

Blake’s father Robb Aerni was happy Blake moved from competing in sports to performing on stage.

“I thought it was great because I saw how much he enjoyed theater, singing and acting,” Robb said. “As a parent I want to see my kids do what they love and enjoy so that was great.”

Robb also defies gender stereotypes with his occupation as a nurse, a stereotypically feminine career field. He has never experienced prejudice, but he noticed some people have misconceptions about his occupation.

“There are a lot of people who make the assumption that I’m in healthcare and they think I’m a doctor because I’m a male,” Robb said.

“When people are younger they just have that stereotype that girls are nurses and guys are doctors,” Blake said. “It was always weird when I was younger because no one really understood that my dad was a nurse.”

Although Robb’s occupation as a nurse is sometimes faced with false judgements, it’s been a gratifying experience for him.

“Being able to help and work with people who are in a stressful situation where they need care is rewarding,” Robb said. “Being there for patients is definitely the best part and especially when you have good outcomes.”