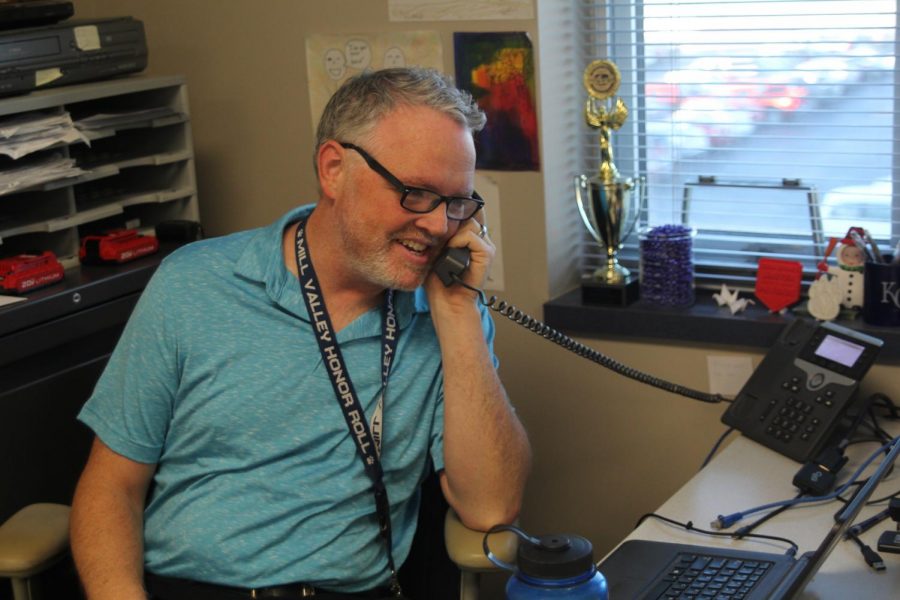 At the beginning of the day, physics teacher Chad Brown reads the daily announcements for the day. “Sometimes I will go and look up quotes or jokes if I feel like including that but most of the time I read announcements that I need to include,” Brown said. “I incorporate jokes because it’s easier to hear a friendly voice in the morning to get your day started.”

Throughout the day, students are informed through hearing announcements at the start, during and end of each school day.

As the main hallway fills with students en route from one class to another, a few distinctive voices ring throughout the building, informing and updating students about the day’s happenings. Staff members and students alike work together to impact their listeners’ days, using their voices to create a school that is always in-the-know.

Science teacher Chad Brown starts off each day with his morning announcements, using his classroom phone to take over the school’s speakers once the final bell rings at 7:50 a.m..

According to Brown, his role in daily announcements helps bring attention to groups that don’t normally receive much praise as well as brightening students’ days.

“I hope that I’m able to give some recognition to groups that don’t get a lot of it,” Brown said. “I also hope that I’m the friendly voice that students get to hear, if they haven’t already, to start their day. I incorporate funny quotes or ideas off the top of my head because I think it’s a better start to the day; it’s easier to hear a friendly voice in the morning just to get your day started.”

As the day progresses, students hear office secretary Edie Waye’s voice come through the intercom during each passing period. Waye calls students down to be signed out or pick up items their parents have dropped off.

“I impact students’ daily lives by helping them get to appointments and pick up their lunches and books,” Waye said. “I’m still not sure [students] can match the face with the voice.”

At the end of the day, students involved in the school’s broadcast department record afternoon announcements that air in each seminar classroom. In addition to literally using their voices to keep the school up-to-date on current happenings, several students are also able to use the experience to branch out of their comfort zones.

A regular anchor for both daily announcements and MVTV, senior Carly Tribble is one student who uses her voice in several different ways around the school.

“I was really interested in the side of journalism that deals with going out to report on stories, but I also wanted to get a feel of what it was like to anchor and actually be on television,” Tribble said. “I wanted to become more comfortable with being on camera so anchoring was a good opportunity to do that. People know you make mistakes so they don’t judge you too much when you do.”

According to Tribble, being an anchor helps others than just herself. From daily announcements to segments in MVTV, Tribble appreciates the opportunity to give attention to unrecognized students.

“You help bring people to the spotlight to people who deserve it,” Tribble said. “Even I have learned a lot about what’s always going on 一 you learn different things about a bunch of different people.”