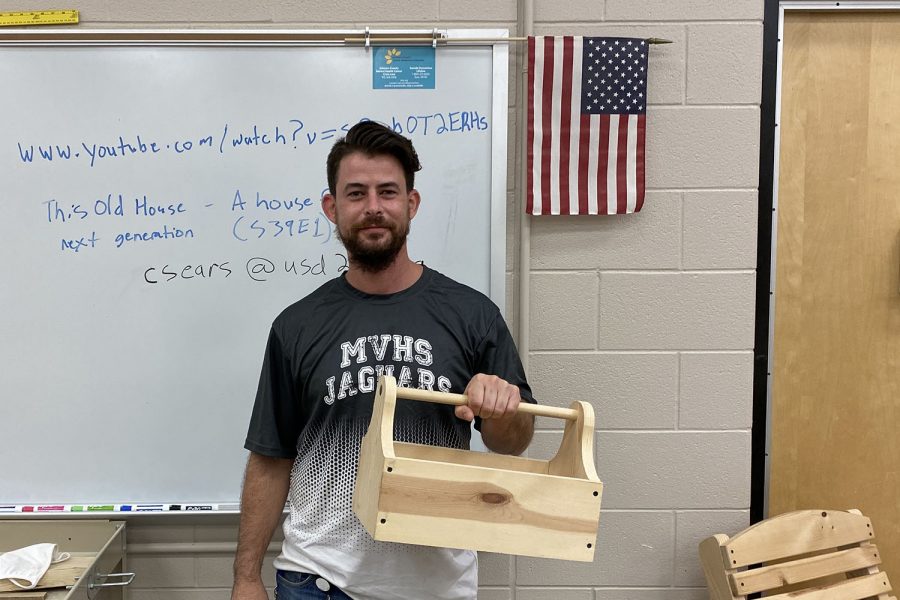 Mill Valley News: What is your background?

Residential carpentry teacher Cory Sears: Before I came here, I did painting and construction, and I was a substitute teacher. I also coach speech, debate, and drama. I actually got my undergrad in speech communication, which is different from the masters. I’m in for a CTE career in technical education. So originally, my background was in public speaking, and I got into construction because I had construction experience. I was a substitute and I taught for five years and coached for five years,

MVN: What movies were you in?

CS: I got to be in the Death Alley film last year. It’s out on Amazon Prime and Google Play and Apple TV and YouTube TV. It will be coming out on October 5 to DVD at Target. There may be more release details later when I find out. I still like theater as well, so that’s kind of a hobby on the side. So I’m hoping in the future I can look for another role.

MVN: What are some goals you have for the school?

CS: My goals are to make sure my first year is successful, and that I’m able to get through the content successfully and safely in [residential carpentry], since it’s hands-on, and to just set something up for the future so that it is easy to use, replicate and teach with.

MVN: What was your first impression of the school?

CS: I actually went to high school here. And I graduated in 2003. It was the second or third class that graduated when Mill Valley first opened up. I’m from Kansas, I’m from this area, West Shawnee, originally, but I moved away to New Mexico and then moved back to Kansas, and started going here my sophomore year. So it was at first completely different from New Mexico. It was kind of a culture shock because there were a lot of different cliques at the other school, and a lot more behavioral problems at the other school I was at. And the school was very well behaved. I wasn’t used to that. And there were higher expectations here. And so it took a little while to adjust. But it was a different impression than now. And actually, at that time, it was a 4A school, it was a very small school, everybody in the freshman, sophomore, junior and senior class, we all knew each other, it was that small. And so to see the expansion and growth, that’s another thing that was different.

MVN: What are you looking forward to in coaching debate this year?

CS: It’s amazing to see how Dr. Carlson has been set up with the debate team. They’re very independent. And a lot of varsity members are peer coaching the underclassmen. That’s always something I’ve wanted with the team and haven’t had the opportunity to really do before. It’s wild because they are basically teaching each other as well. It’s not really like this top-down approach where the coaches are hovering over and dictating everything that the students do. They know best because they’re the debaters out there. And they’re bringing that in and teaching it to each other as well. So it’s very, very cool.