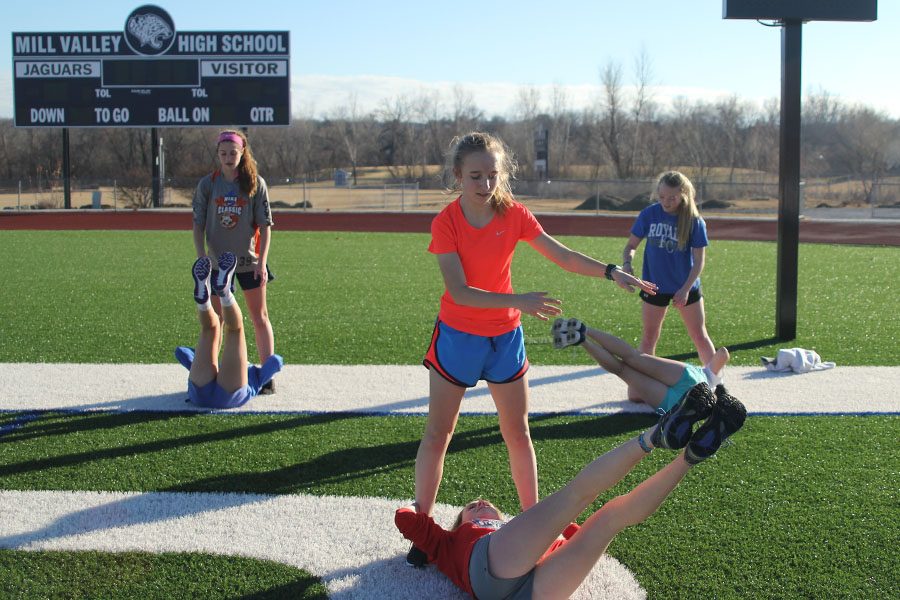 During soccer winter training freshman Emerson Kaiser workout with freshman Morgan Kocas on Wednesday, Jan. 18. "I run three times a week because the other two days i’m working out with the soccer team." Kaiser said.

To prepare for the spring season, students partake in offseason training

To prepare for the upcoming spring sports seasons, many athletes have already began winter training. To bring out the best of their abilities, the athletes must put a lot of time and hard work into their winter workouts.

Winter training takes place from November to March. For cross country runners, this means that they begin winter training directly after the conclusion of their season.

Sophomore Greg Haynes had a very brief break between the two. He takes about three or four days off after the cross country season and then he begins training for the spring.

Despite having to put many hours into running, Haynes sees an advantage to having year-round practices.

“It gets a lot more miles on our legs and it keeps us fit all year round for the track season,” Haynes said.

Haynes believes that going straight from cross-country season to winter training will benefit him in track.

“It gives you that edge on other people because while people are resting up and starting when everyone else starts, I’m out training and getting more miles in than anyone else,” Haynes said.

Junior Justin Grega runs almost every day during the winter; when he looks back at previous seasons, he notices a large improvement.

My times in both races really dropped a lot more than I expected.”

“Freshman year I didn’t really do winter training but last year I did and I have seen big improvements,” Grega said. “My times in both my races really dropped a lot more than I expected.”

This year, Grega wants to drop his times even more and get another shot at competing at state.

Grega only sees one real downside to winter training: the fact that it takes place during the winter.

“The five degree weather runs that we had in December were my least favorite part,” Grega said.

Junior Gavin Overbeck agrees that making the commitment to winter training will pay off during track season. Overbeck h 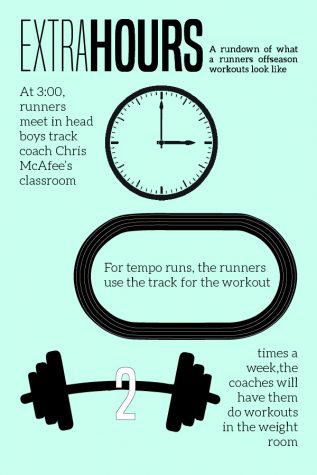 as yet to see a difference in his times, but still has high hopes for the upcoming season.

“[There has been] not too much improvement,” Overbeck said. “I’m just staying in shape and I’ll hopefully start to improve towards the beginning of track season.”

On the contrary, Haynes has already seen some concrete results come out of winter training.

Along with being his favorite part of winter training, Haynes feels that the indoor meets allow him to get some “more race experience under his belt.”

When the track season starts, Grega will run the 400-meter, 800-meter and he is going to try the 1600-meter. Grega uses winter training to prepare himself for all of his events.

“You get better and basically it gets you into shape because day one of track we don’t take it light,” Grega said. “We jump right into it and [winter training] better prepares you for that.”