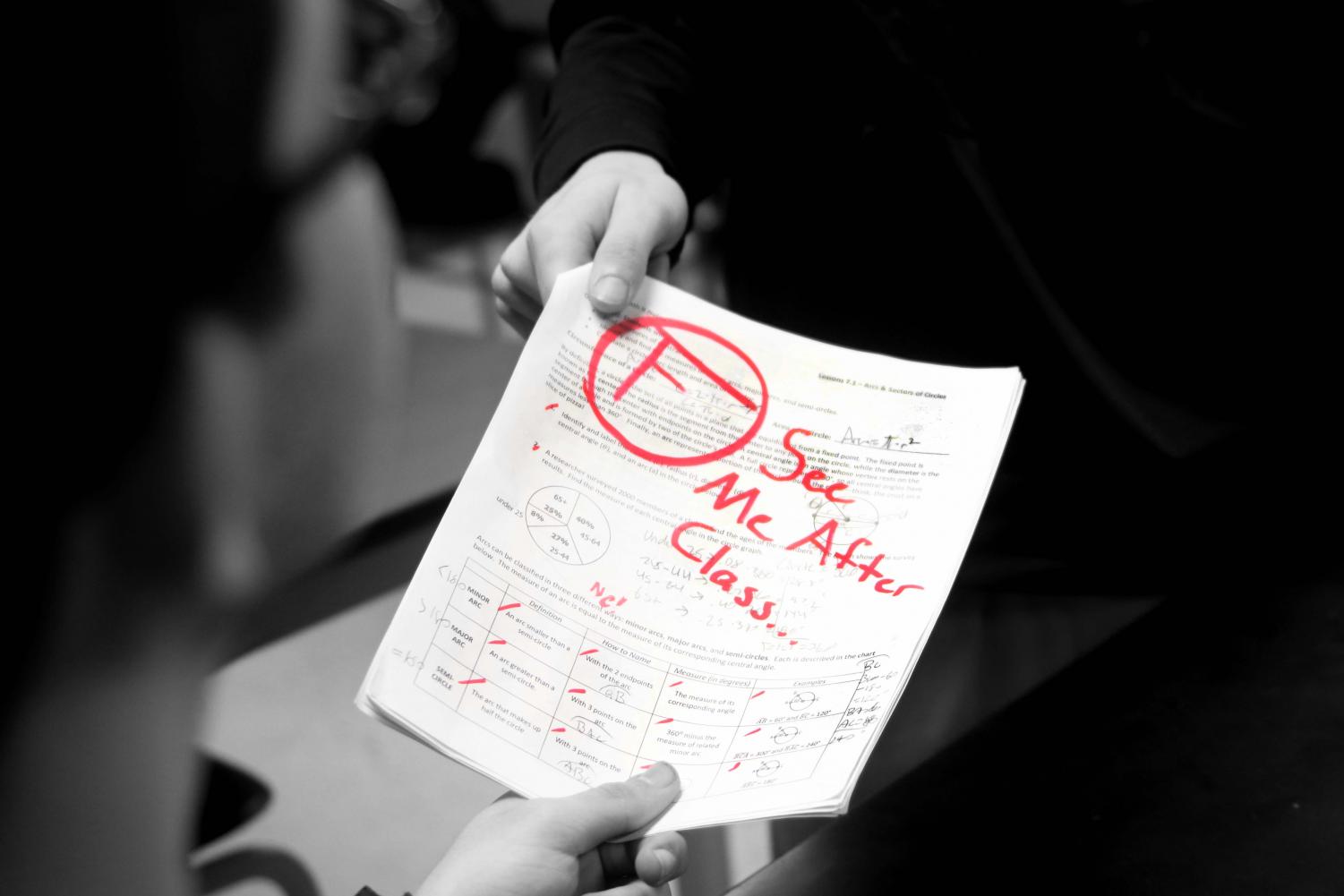 Students caught cheating are, under school policy, automatically given a zero on the assignment. (By Hayden Resch)

Students caught cheating are, under school policy, automatically given a zero on the assignment.

The Pressures of Cheating

Examining the causes and effects of academic dishonesty at Mil Valley

As time is ticking down, a whole page of the test sits in front of you, left blank with questions you don’t know the answer to. Panic rises in your throat. Your hand slides into your pocket and reaches for your phone as you carefully watch the teacher, hoping you can find the answers on your device.

Scenarios like this play out frequently in all schools, and the culture of cheating revolves around pressures that students face when it comes to their academics. Whether it is from their parents or societal standards, students find themselves cheating to relieve these pressures.

For a senior female—who wishes to remain anonymous to avoid criticism of her opinion on academic dishonesty—there are two sides to cheating. While she believes that cheating is not putting the effort into a class, she thinks that it is acceptable when an individual is only doing it for minor class assignments.

“If I see someone who constantly cheats… I think they’re cheating themselves out of an education,” the female said. “On the other hand, I believe that sometimes, for certain assignments, [cheating] is acceptable since assignments have less of an impact on your grade.”

Similarly, for a junior male, who asked to remain anonymous due to his admittance to cheating, sending a picture of a small assignment is more acceptable than cheating on an exam.

“[Cheating] on homework, just sending someone a picture, doesn’t matter to me; I do that every day. I haven’t done homework in years,” the male said. “I try not to cheat on tests because I think that is wrong.”

“I definitely believe that if you’re raised in a household where rewards and punishments are given for grades, there’s going to be a higher rate of cheating,” the female said. “…Pressure from family is something that impacts a student’s willingness to cheat because they will do whatever it takes to please their parents or their teachers.”

For a junior female, who wanted to remain anonymous due to her complacency with cheating, pressures from her mom to obtain at least a B in all of her classes caused her to decide to cheat.

“My motivations to cheat are that my mom will ground me if my grades drop below a B,” the

female said. “The desire to not be grounded until my grade is back up leads me to cheat my way to get better grades.”

In addition to parental pressures that some students face, math teacher Sarah Sides believes that society and individual pressures cause students to turn to cheating.

“A lot of [students put] pressure on themselves to perform really well and [face] pressures from parents at home and from society,” Sides said. “I think a lot of students are perfectionists, so they might not need to cheat, but they tend to…because of the pressures.”

Though students often face pressures to maintain As in their classes, some students use cheating as a way to pass a class, such as anonymous junior male who cheated in Spanish II his freshman year.

“I had a pretty bad grade…and to try and improve it, I had a few words and what they meant…[written] on my leg,” the male said. “I wasn’t really using it, but I guess it was seen [by the teacher], and my grade dropped tremendously.”

For another junior female, who asks to remain anonymous due to her actions with cheating, challenges in life cause her to resort to cheating.

“I feel like I haven’t cheated until this year. It’s like work has been easy, but now that I’m actually having to face hardships, everything’s getting harder,” the female said. “So I’ve just been using other people as a resource instead of relying on myself.”

School social worker Debbie Gudenkauf has come across many students with test anxiety, which is the feeling of distress one has before taking a test, which she stated can help a student prepare well for the test, but often interferes with performance.

“It’s normal to have some distress or anxious feelings before a test. Those feelings can actually help you prepare and perform better,” Gudenkauf said. “When these feelings are so strong that they interfere with your performance and do

you poorly, they may be at the level that would be considered test anxiety.”

Test anxiety may be one factor for why students decide to cheat, but for AP Physics teacher Ryan Johnston when it comes to AP students cheating in his classes, he believes it’s primarily the result of pressures students place on the

mselves to get all As, which he believes is the result of the self-worth students derive from the grading system.

Gudenkauf agrees with Johnston for the reason students resort to cheating as she believes students cheat due to fear of failure and not maintaining a high GPA.

“With the students I see, it is often fear of failing – fear of not having the GPA they want or that parents expect, fear of not getting into a college that they want or fear of being academically ineligible to participate,” Gudenkauf said. “

While there are students who cheat because it’s easier than doing the work, those are not the students I see.”

A second anonymous senior female shares Johnston and Gudenkauf’s sentiments about why students and her peers decide to cheat in both AP and regular courses.

“I think they’re motivated by grades because we’re taught, in this society, that grades are everything; your GPA is everything, and if you have a ‘C,’ it’s the end of the world even though it’s not,” the female said. “That kind of environment causes students to cheat rather than learn the material, which is what school is supposed to be designed to do.”

While most students cheat because they fear failure and having a bad GPA, Sides believes that students should take a failure for one test rather than cheat.

“I always try to tell students, ‘I’d rather you fail a test than I catch you cheating because…we all have bad days,’” Sides said. “Take less emphasis off of the grade and put more emphasis on your character, your choices and efforts.”

In the student handbook the school defines academic dishonesty as “cheating, plagiarism, obtaining an unfair advantage and aiding and abetting cheating” on assignments and examinations. While teachers often deal with cases of academic misconduct on their own, according to the student handbook, the highest consequence students can receive is an “in-school or out-of-school suspension and/or loss of participation in extracurricular activities.”

“A student who engages in any form of academic misconduct will forfeit credit for the work in question and may be subjected to additional disciplinary measures,” Waldeck said. “You will get a zero…and after that, if the behavior continues or if you were also dishonest with us, we may issue further consequences.”

“
Cheating is inevitable, so I really think that [teachers] should work to not just prevent cheating…but make sure everyone understands the concepts so cheating can be nipped at the start instead of at the end.”

Anonymous senior female thinks that the policy of giving students a zero for assignments that they’ve cheated on is excessive, as it will hurt their grade significantly and prevent them from obtaining a reasonable grade in the class.

“I think the policy is way too harsh because if someone gets a zero on a highly weighted test, which they probably cheated on because they were scared it was going to tank their grade, then giving them a zero can possibly…ruin their GPA,” the female said. “That will affect them later in life when they apply to college, and I just think that’s ridiculous.”

While administration follows the guidelines set in the student handbook, some teachers report cases of cheating depending on the circumstances. Even though Sides reports major incidents of cheating to administration, such as on a test or a final, she believes that just because a student cheats, it shouldn’t reflect their capabilities.

Waldeck hopes the policy for cheating will help push students to work for their grade.

“It’s our hope that the consequences deter the behavior and students…accept the grade they earn based on how hard they work,” Waldeck said.

Besides giving students consequences to deter cheating, the anonymous junior female believes that teachers should also focus on making sure content is understandable.

“Cheating is inevitable, so I really think that [teachers] should work to not just prevent cheating…but make sure everyone understands the concepts so cheating can be nipped at the start instead of at the end.”