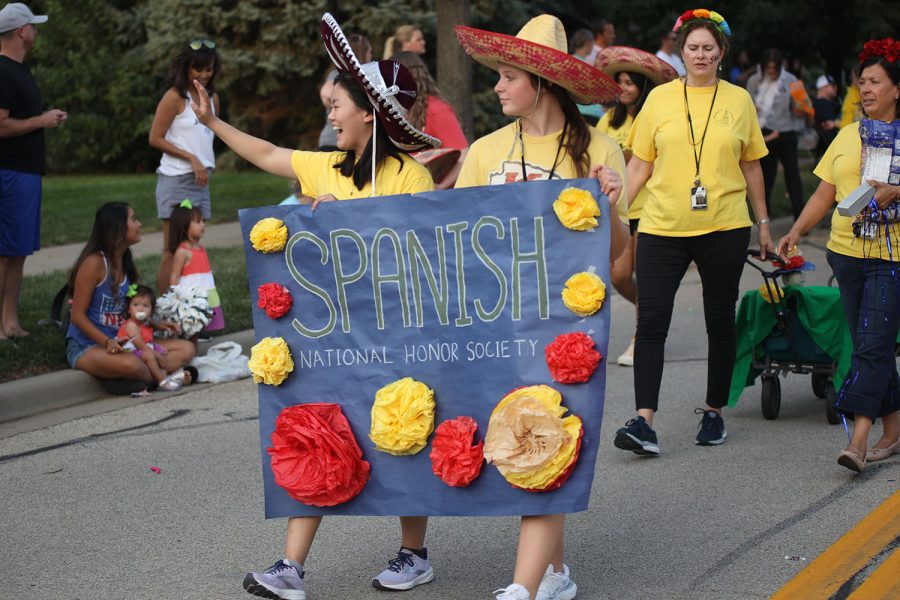 Spanish National Honor Society participates in the Homecoming parade for the first time in school history.

The annual Homecoming parade made its way through Grey Oaks Wednesday, Sept. 14. The parade consisted of 17 floats that represented school classes, clubs, athletics, Homecoming candidates and the lunch ladies. This year’s parade had a colorful new addition with Spanish National Honors Society making their debut appearance with a “Coco” themed float.

According to SNHS co-sponsor Edith Paredes, a group of SNHS officers are to thank for putting the float together .

“The group of officers that we have this year were really out for it,” Paredes said. “They were very enthusiastic about it and that’s why we put it together.”

“I’m a setup kind of person,” Clement said. “I like doing the art for the side and organizing people.”

Additionally, Clement enjoyed taking part in the parade, and already has ideas for future floats.

“It would’ve been fun to do an ‘Encanto’ theme,” Clement said. “Or another movie about Hispanic characters.”

Overall, Paredes hopes that more people will want to participate in the parade on behalf of the SNHS next year so that they can use a car or truck to make their float bigger. Paredes described how the community reacted to their float.

“People on the streets walked up to them all trying to speak Spanish,” Paredes said. “They were saying things like ‘Hola… Como estas.’”