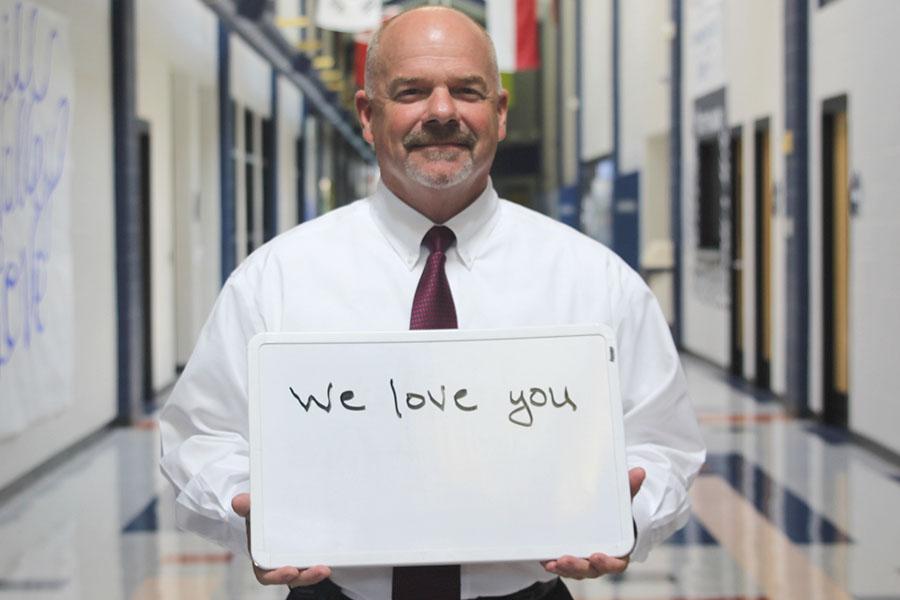 Gallery|39 Photos
By Victoria Wright
The JagWire asked students and staff members to write down a phrase they would tell a friend who is considering suicide.

Every day, 1,368 students walk to and from class, discussing friends, relationships and the next big test coming up. Each of these students is an individual facing his or her own distinct and unique problems, and many may feel lost in the noise of a big, high-achieving school. Those students may be facing depression, anxiety, abuse or unimaginable circumstances. According to a JagWire survey of 1,072 students, sixteen percent of the students in this school have considered suicide, while 40 percent have a friend who has considered suicide. Those students who face these problems are not just a statistic; they’re one in the 1,368.

It is a known fact among psychiatric professionals that suicide is the second leading cause of death for young adults within the ages of 15 to 24. Professionals have different theories as to why this is, but one fact most can agree on is that teen suicide is a growing problem in today’s society.

The U.S. Centers for Disease Control and Prevention recently released a new study citing suicide rates in teen girls at a 40-year high. Additionally, suicide rates in girls ages 15-19 have doubled from 2007 to 2015, while boys’ rates have risen by 30 percent in the same time period.

Locally, 173 have considered suicide and 59 have attempted, according to the JagWire survey.

The big question is: why? 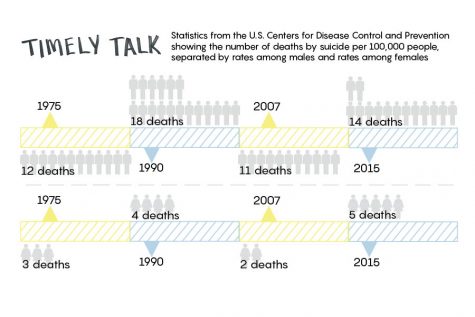 School social worker Debbie Gudenkauf believes that each case of teen depression and suicide is different, and thus it is difficult to pinpoint specific criteria to identify reasons for teen suicide.

“I think there’s so many different components that you can’t say that it’s one thing or another,” Gudenkauf said. “That’s what so hard about so much of this. If we could figure that out, we could stop it.”

She does, however, recognize there are some factors that could play a role in many young adults’ struggle with depression and suicide.

“Mental health professionals believe social media has a part to play in [teen suicide and depression],” Gudenkauf said. “Kids just don’t have the coping skills, [and] they’re exposed to too many things.”

Under the umbrella of various factors, Gudenkauf believes there is a common thread among people who complete.

“Suicide is about stopping the pain and that’s what we have to get the kids to understand,” Gudenkauf said. “We have to recognize that they’re in pain, and if you don’t have those coping skills or if you’ve got a predisposition for depression or anxiety …  and that’s not being treated, then it is going to hurt. We just have to help people understand that you can get through this and grow from it.”

Suicide can affect people of all ages from all different backgrounds. Aforementioned factors such as mental health and a toxic environment can impact how a student perceives his or her life, and he or she may feel so stuck they cannot see a way out of the situation.

A senior girl at Mill Valley, who asked that her name not be used due to the sensitivity of the topic, experienced depression and suicidal thoughts during middle school and now looks back on it as a period of loneliness.

“My life is very different than the kids here, so I felt isolated,” the girl said. “And with time, that isolation grew and I had so much free time to just think about everything. I didn’t have any special talents, I wasn’t known for doing good things, I wasn’t academically gifted, I wasn’t athletic; I felt like a waste of space.”

I honestly believed that I would not live the see the year 2013.”

She eventually attempted suicide twice. It was only after a friend alerted a school professional that she got the help she needed.  The biggest thing the anonymous girl emphasizes is that time can heal most everything. She believes that most problems and stress will get better and there will be things to look forward to. 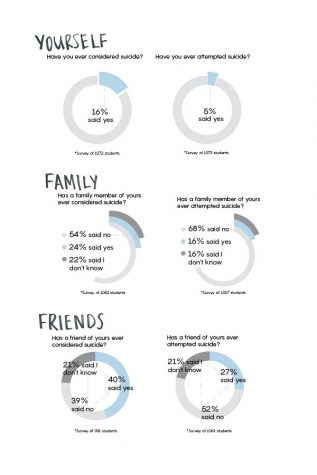 “I honestly believed that I would not live the see the year 2013,” the girl said. “It’s 2017 now and I’m thinking about my future and what college I’m going to attend. Things do change with time. I’m still putting the pieces of my life back together years later but I’m in a far better place now and happy.”

Senior Kristen Garrett felt similarly, sharing that stress in her personal life led her to consider suicide as an option.

“I ended up talking to one of my friends who was also on the basketball team and was kind of going through similar issues,” Garrett said. “She advised that I needed to see one of the counselors at the school and kind of talk about things so that things wouldn’t get worse than they already were.”

The anonymous girl asks other people contemplating suicide to reach out, even if they are scared.

“Please reach out the get help from professionally trained individuals,” the girl said. “If a friend or someone you know is suicidal, please talk to the counselors at school and they’ll know what to do. That first step can be the one that saves your loved one’s life. They made be angry at you for doing it, but if you want to see them happy and healthy you have to do it.”

A tough question to answer, of course, is what can be done to prevent suicide. There is no script to read or chart to follow, but the district does take steps to decrease the risk of suicide through education and therapeutic support.

Last year, Kansas passed the Jason Flatt Act, which required school districts to meet three benchmarks in suicide prevention. First, all personnel must be trained in suicide awareness annually for at least one hour. Secondly, the school must make prevention materials available to parents. Finally, a crisis plan must be put in place.

As part of that implementation, the district began to train staff members on suicide awareness during the first few days of in-service each year. A video was made to highlight warning signs, prevention techniques and personal testimonies from teachers.

Each Health class also now participates in a program called SOS, Signs of Suicide. According to Health teacher Amy McClure, the program is designed to teach students warning signs of depression, warning signs of suicide and what to do if a friend or family member needs help. 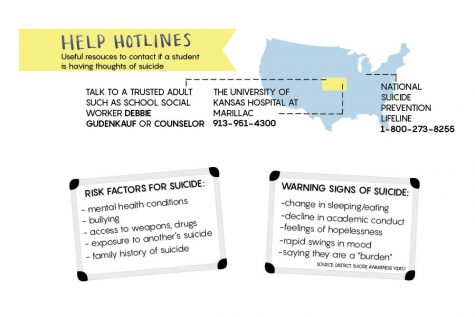 “I’ve always included [mental health] as a unit in my curriculum just because I feel that it’s important,” McClure said. “I was actually teaching here the year that we had a student, a senior, that took his own life, so I felt it important to educate kids at Mill Valley because that had happened.”

McClure is talking about a senior in 2003, who completed suicide in the fall of that year.

“Students and teachers both were devastated,” McClure said. “No one really knew what to say [and] the administration and the staff did everything they could to help the students that day, but I think that was then also the realization that ‘hey, we need a plan of what to do for the students here if that were to ever happen.’”

I felt it important to educate kids at Mill Valley [about suicide].”

Gudenkauf mentioned that the district had a plan in place prior to the death in 2003 and followed that procedure. Students were broken up into small groups to discuss their feelings and also had the choice to display angel wings at graduation. She admits, though, that the situation could have used more preparation.

“While we had a crisis recovery plan in place and followed it at that time, it was evident we needed to add more to it,” Gudenkauf said. “We have updated the plan periodically over the years with the last update being done last year so that it aligned with the Jason Flatt training.”

Both Psychology and AP Psychology classes discuss suicide in a unit called “abnormal psychology.” According to Psychology teacher Kirsten Crandall classes talk about specific mentalities that many young adults can experience and what resources are available to them.

“We talk a lot about the different specific mentalities that seem to be prevalent in adolescents when it comes to suicidal ideology,” Crandall said. “We also talk about the number of resources that exist, that often times students don’t utilize, and we try to have just an open discussion of what is it really like for teenage students that are struggling or think they might be struggling.”

Crandall therefore feels it is important to expose students to factual information and allow them to talk about their experiences.

“Especially in the last couple years, there has been a lot of media coverage, whether it’s been netflix shows, or just statistics, that have been published about suicide rates about anxiety and depression,” Crandall said. “I think either students have had personal experience with that and so they need to talk about it or there is a lot of misconceptions about it, so I think it’s important for everyone to just understand how prevalent those situations are.

Gudenkauf believes students should not be afraid to ask their friends if they are considering suicide.

The district suicide prevention training video acknowledges that it can be difficult to start a conversation with those who have been displaying signs of suicidal thoughts. It lists a few things to say in order to spark a discussion such as “I have been feeling concerned about you lately” and “I wanted to check in with you because you haven’t been yourself lately.”

Between Crandall, Gudenkauf and McClure, the common theme is to get help. At school, any trusted adult is available to listen and will take the situation to Gudenkauf. If the person in need is not comfortable talking to their parents or school faculty, they can contact an outside source such as the National Suicide Prevention Lifeline at 1-800-273-8255. The University of Kansas Hospital at Marillac also specializes in youth mental illness. Their number is 913-951-4300. Of course, someone in an imminent threat of attempting suicide is urged to call 911, where a trained crisis team can handle the situation.

Crandall stresses that every student in need of help has plenty of resources and should not be afraid of talking about the subject.

“I think that a lot of times students that are having a hard time … try to keep that to themselves,” Crandall said. “I wish people just recognized how much it can be and should be an open conversation.”