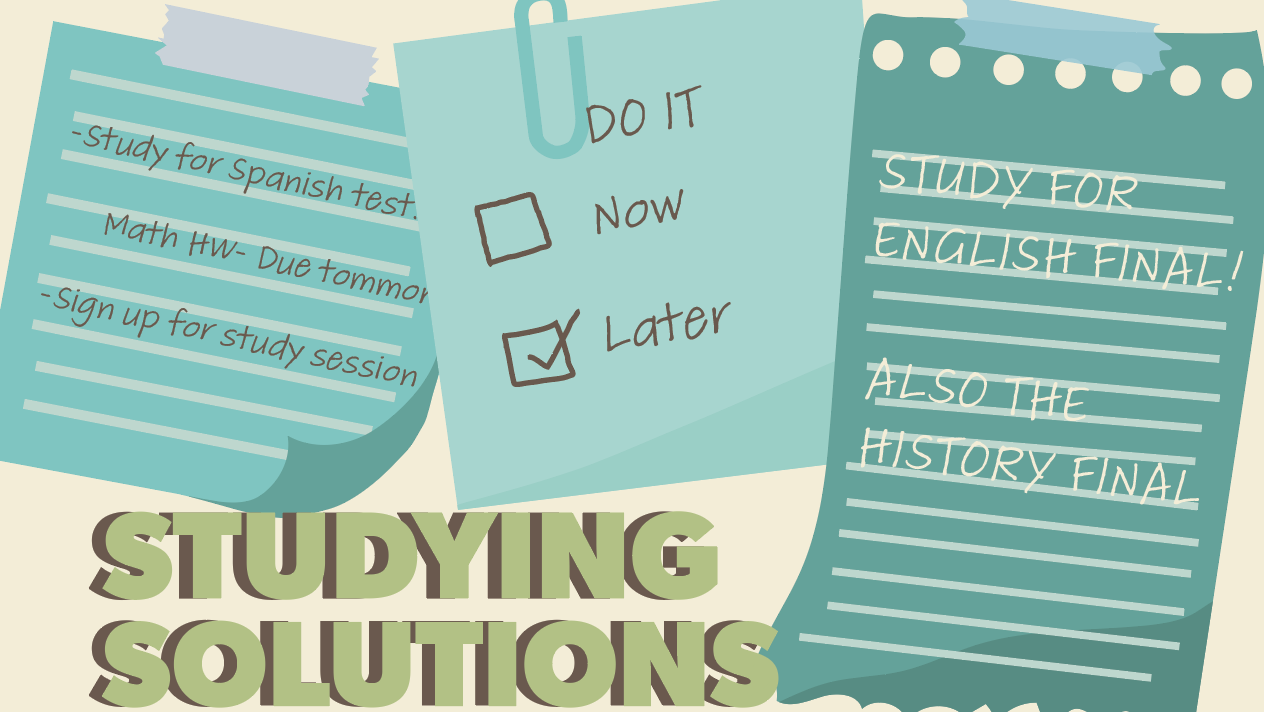 Studying solutions to mitigate the stress of finals week

Learning about the study habit that fits you can make studying an enjoyable experience again.

As the end of the semester approaches, students are beginning to think about how they will study for their final exams. For some students, finals are a breeze due to their well-organized notes and effective study habits, other students find themselves scrambling to get their materials together. As finals loom closer, the stress can pile up into mountains. Though it may seem difficult at times to adequately prepare, there are ways to walk out of finals with a good score without sacrificing your mental health. Students share their experiences with studying, and provide tips for procrastinators and planners alike.

When approaching studying for tests, students find themselves waiting until the last minute.

One of these students is freshman Jordan Powell, who usually starts studying the night before her tests and has found that it has worked well for her.

“I know that I won’t do well on a test if I don’t look at it and review it at all, but it doesn’t take much for me to do decent on a test but it was like looking over information,” Powell said.

On the other hand, senior Sophia Chang wants to start studying earlier but finds it hard to start.

“To be honest I [start studying] one or two days before,” Chang said. “I like thinking about it a week before, but then I don’t do it because I procrastinate.”

Junior Nathan Garner studies for finals, but typically does not study much for tests outside of mandatory classwork.

“For finals I’ll try and study in a more usual way; I look at the textbook and all my notes,” Garner said. “[Though,] usually I just do what the teacher provides. Sometimes they’ll provide a good practice set or a practice quiz. I’ll just do that or I’ll look at Quizlet if it’s like an important test. But usually in my classes, I pay enough attention that I don’t really have to.”

Garner understands that studying can help improve grades, but also acknowledges that for students with other priorities than school, it isn’t always necessary.

“I think if you fail a test that’s not great, but I think that there’s usually enough [other grades] in each class that if you do bad on one test; you can just do good on everything else and you’ll still get the ‘A,’” Garner said. “I mean, obviously studying more will probably lead to a better grade, but I don’t hold grades as a super high importance, in general.”

Psychology teacher Kirsten Crandall emphasizes the importance of having a mindset like Garner at times, saying that studying should not dictate a student’s self worth.

“How well you study is not going to ever dictate your success as a human,” Crandall said. “The sum of who you are is so much more than your grades. You are simply, on a test, just demonstrating what you know, not what your worth is.”

Sophomore Will Jonasson does not currently place much emphasis on grades, like Crandall talks about, and prefers to study last minute like Powell.

“A lot of times I don’t [study], but other times, I usually have note cards and I take notes. Sometimes it helps. Sometimes it doesn’t. I usually put it off to the last minute,” Jonasson said. “I think if I had better organization, and I cared, first of all, that would take too long, but it would also improve my grade.”

Oftentimes, for Jonasson, reviewing is difficult as a result of the lack of structure within storing and taking notes.

“It looks like gibberish. I tried to organize it. But I really have no organization, system or method.” Joanasson said. “I just write what I can.”

Students have a variety of reasons to wait until the last minute to study or do homework. But as Crandall believes, simply feeling overwhelmed can result in building habits, such as procrastination.

“I think for myself, and for most people, it’s when we feel overwhelmed that we procrastinate.” Crandall said. “And so procrastination is more fear based than it is anything else.”

For other students, cramming at the last minute is not as successful. Leading them to prefer a more planned out and organized method.

Senior Rose Lee typically finds the most success studying four days in advance, Lee would recommend that students plan ahead when studying for big tests and finals.

“[I would recommend that students] plan for future study time,” Lee said. “Plan to organize your notes and plan what you want to study and organize what you really need to study on.”

Crandall will typically recommend a more planned out method, working in shorter intervals in order to help retain the information long term and combat the feeling of being overwhelmed.

“The first thing that I always tell students is to work to space it out,” Crandall said. “It’s not going to feel good at first. But after like a week of doing that, you start feeling like you’re the most organized person in the world, and it gets kind of addictive.”

More specifically, Crandall would look at test dates then work backwards to make sure she had enough time to feel ready for the test, making sure to balance out the study time. Then, do the tasks in a specific order.

“I’d start with an easy one to kind of ease into it. And then whatever the most annoying thing was that I had on that list, I would do second,” Crandall said. “Because once you get that thing else is easy.”

Not only is it important to make sure you have a balanced plan. But it is also very important to use your time effectively. For Crandall, this will often look like reminding students that when you’re studying it’s not meant to be miserable.

“I think we’ve accidentally trained you guys into thinking that if you’re studying well, you’re miserable, and you are at it for hours and just kind of torturing yourself.” Crandall said. “When in actuality if you can learn to be productive in a short timeframe, 10 minutes of good studying is better than hours of moderate studying.”

This process of efficient studying starts in school with making sure the in class work and notes are organized.

For Lee, this looks like writing out the content, finding that it helps her to better memorize and understand the material.

“For tests, I usually look at the study guide or whatever notes I’m given or essays that have us write,” Lee said. “Then I’ll rewrite the notes or I’ll rewrite the essay or I’ll usually create a Quizlet.”

Many students have found specific methods and resources that work well for studying.

Lee believes that a good note taking system can set off the preparation process on a good foot, finding that for her, notes with lots of colors and details help her to memorize the content.

“I like lots of colors in my notes, so I highlight the main topics, I highlight the subtopics and I’ll highlight vocab words or important quotes for the notes,” Lee said. “I like bullet points; I hate essay format.”

Another method which can help is group studying. Chang studied for AP US History in a study group and found talking through the material to help.

“For groups, I really love being able to lean on other people when I don’t know something because I often don’t know things,” Chang said. “We can get sidetracked, which is not always a good thing, but it makes it really

fun. I gained a lot of friends from being in a group.”

“I also encourage [students] to use each other,” Crandall said. “You guys are in such a social stage of life and you’re seeking social connection no matter what. So if you’re going to put your phone down”

Chang also likes using an organization app called Notion. The app helps her to organize her schedule and take notes in a more personalized way.

“[Notion is] really cool because you can really customize the style of your notes,” Chang said. “I think if something’s prettier, I’m more willing to use it. So I use that to organize my weeks and my months and more future planning. So I can try and be more proactive for everything else.”

Senior Abhi Raut uses another unique method of studying: presenting to her parents.

“It’s kind of weird, but if I have time, I will just have my parents there, and I’ll pull up all the Power Points, whether it’s math or Anatomy or [Biology] and go through every lesson with them like I’m the teacher,” Raut said. “It really helps me because then I’ll be able to formulate my thoughts into words out loud. If I’m confused about something, but I don’t catch it yet, I’ll catch it then.”

Raut also recommends writing down the material to help with memorization, citing her time preparing for theater.