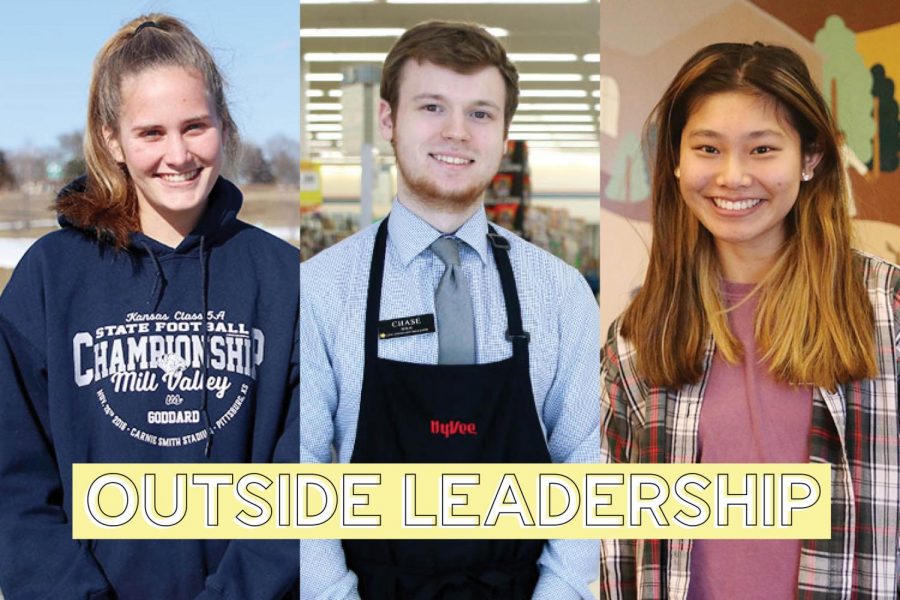 Partaking in leadership roles outside of school, sophomore Emma Schieber is a team captain for her KC Fusion club soccer team, senior Chase Mick is an assistant manager at Hy-Vee and senior Libby Mullican serves on the regional youth cabinet.

Students take on leadership positions outside of school

Typically students are involved in leadership positions at school, but some students are also leaders in the community. Whether it’s being an Assistant manager at hyvee or being team captain of a soccer team, leadership is very important.

According to senior Chase Mick, one of the assistant managers at Hy-Vee, taking on a leadership position while still in high school has been quite difficult.

“It’s really hard go have to watch and try and manage people,” Mick Said. “It’s challenging to get people motivated to do their job, it’s really not an easy task.”

Mick has worked at Hy-Vee for a year and a half, and became assistant manger two months ago when he turned 18. As assistant manager, Mick manages the employees and makes sure that they’re doing what they’re supposed to.

While some students take on a leadership position at work, other students, such as senior Libby Mullican, have taken on leadership positions in the community. After attending a church camp she heard about the Regional Youth Cabinet; a service based student leadership club through church. Mullican decided she wanted to apply and filled out an application. She was accepted and appointed to the club.

For Regional Youth Cabinet, Mullican is the moderator of the club, leading each meeting and deciding what the club does.

“Right now I am the moderator, so it’s like the president of the club basically. Last year I was the secretary, so I kept notes and everything like that,” Mullican said. “ I run our social media accounts, and I … take charge of what’s happening on the schedule. I also lead discussions, and brainstorm activities.”

For Mullican, leadership does not necessarily mean being an visible figure, it can also mean doing your part for the community behind the scenes.

“I definitely think that [Regional Youth Cabinet] has helped me out a lot, because I would say I wasn’t really a very outgoing person when I was younger and taking on this leadership role really opened my eyes to kind of different leadership styles,” Mullican said. “Through this program, I learned that there’s not just the leadership style where you’re just talking in front of everyone, you can be a quiet leader and there’s also different ways behind the scenes that you can be a leader other than just kind of being upfront about everything.”

Other students hold leadership positions in sports as well, such as sophomore Emma Schieber, who is team captain of her division two club soccer team.

As team captain, Schieber leads her team during games, gets her team excited and always encourages her teammates. 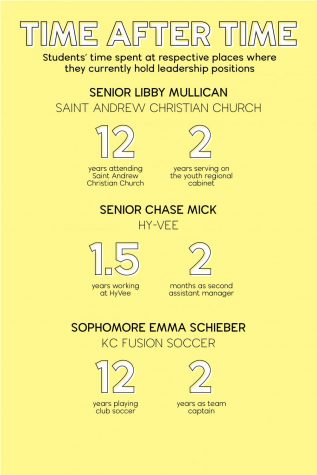 “[Being team captain] usually just means keeping my team pumped up. During a game, I will help guide my teammates by communicating with them so we’re working as a team and not working individually,” Schieber said. “I always encourage my team to put in a lot of hard work and effort, and remind my team that it’s not really about winning games, it’s about working hard.”

Being a leader has helped Schieber boost her confidence, and has made her feel more comfortable in situations where she has to lead.

“[Being team captain] has really helped me outside of soccer as well, it’s made me work better with my peers at school and made me feel more confident,” Schieber said. “I feel more comfortable leading my peers in any setting.”