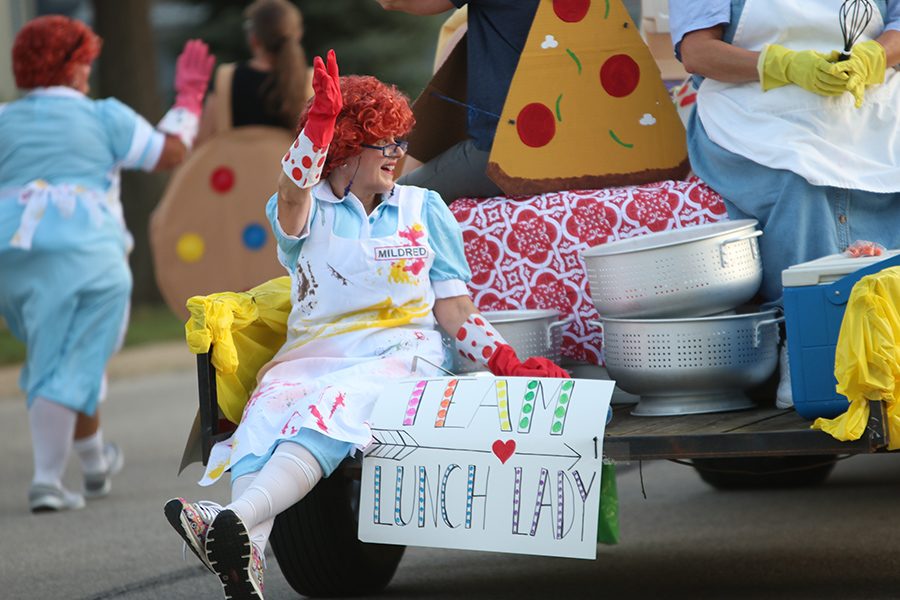 As the parade comes to a close, one of the lunch ladies waves to the public from the back of her float.

For the first in Mill Valley history, the cafeteria workers created their own parade float 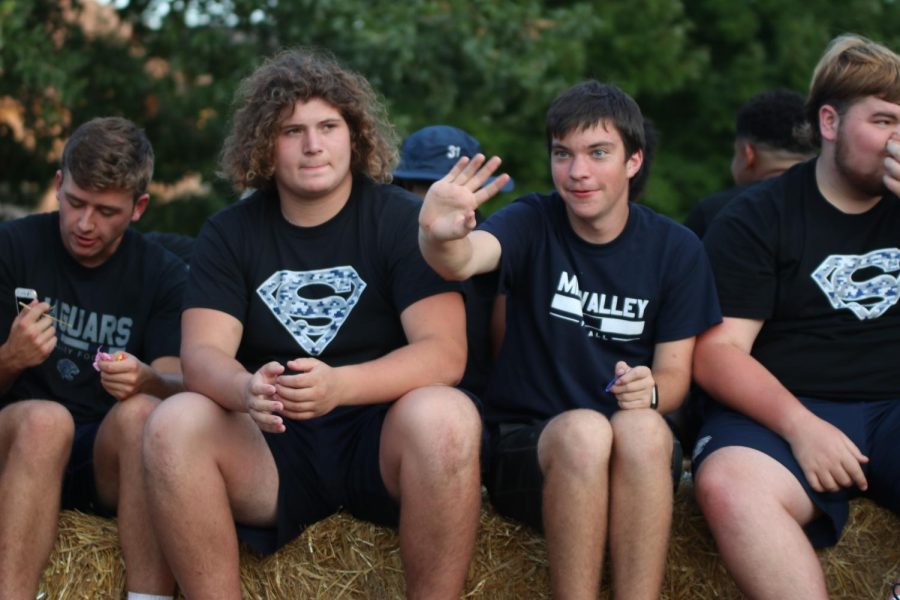 Gallery|14 Photos
By Avery Liby
Sitting on the football float, senior Nick Pettigrew waves to a crowd of kids.

In the midst of Homecoming week, the community came together to enjoy the annual Homecoming parade on Wednesday, Sept. 18. Along with the 17 floats for school classes, clubs and athletics, the lunch ladies assembled their own float for the first time in school history.

According to cafeteria worker Michelle Kile, the float was a spontaneous decision.

“When I first saw the lunch ladies’ float I was a little caught off guard,” Sitzmann said. “I really think they planned it well and hopefully it made people laugh because it looked like [the cafeteria workers] were having a good time with it.”

Part of the entertainment of the float were the various food-related costumes that the ladies wore. For example, Pam King, affectionately known to students as Pam the Cookie Lady, dressed up in a chocolate chip cookie costume. There were also costumes of a pizza, a milk carton and a donut. According to Kile, the outfits were all unique.

“[Our costumes] were half made and half bought,” Kile said. “They were kind of a free for all. [One of my coworkers] was going to be a dinosaur, but then she became a hot dog.”

In order to make floats like the lunch ladies’ float possible, StuCo sponsor Erica Crist works with city employees to organize the parade.

“We have to submit a parade request to the City of Shawnee. There is a small fee associated with that,” Crist said. “Then [the city] organizes to have firefighters or police officers come out and they get the streets closed for us.”

While closing the streets through Gray Oaks may be inconvenient, Gray Oaks resident Mike Kelley, whose house is located along the parade route, believes that the parade was worth it.

“We didn’t have any difficulties with the parade being in the neighborhood. It is all good and part of the fun,” Kelley said. “I like all of the spirit and I like all of the floats and how it is a community effort with the students and first responders.”

Agreeing with Kelley, Sitzmann also loves the sense of community that comes hand in hand with the parade.

“My favorite part was seeing everyone come together to make awesome floats that we are all proud of,” Sitzmann said. “[I love to see everyone] have a lot of school spirit.”