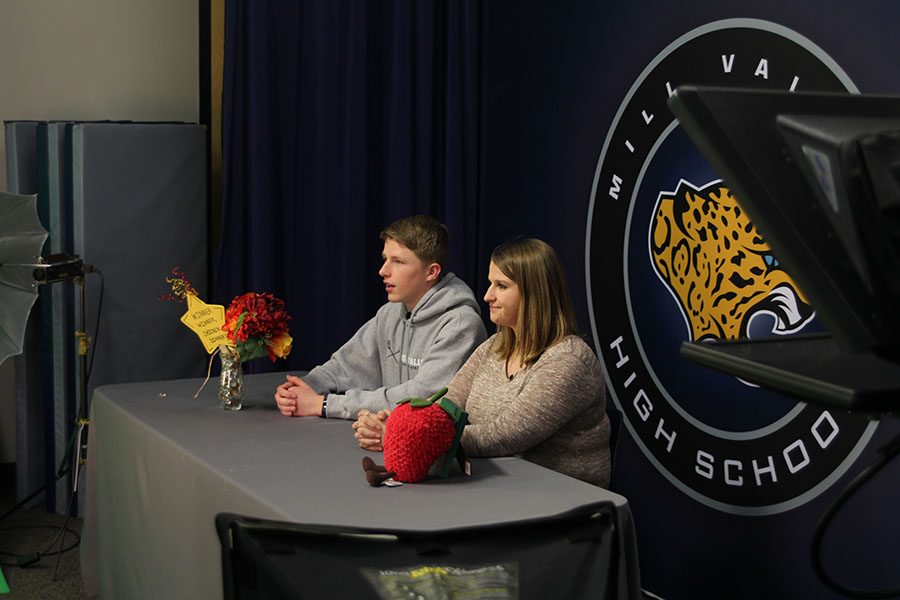 While filming announcements on Wednesday, March 6, sophomore Tanner Jones and junior Ashley Grega read their script off the teleprompter. 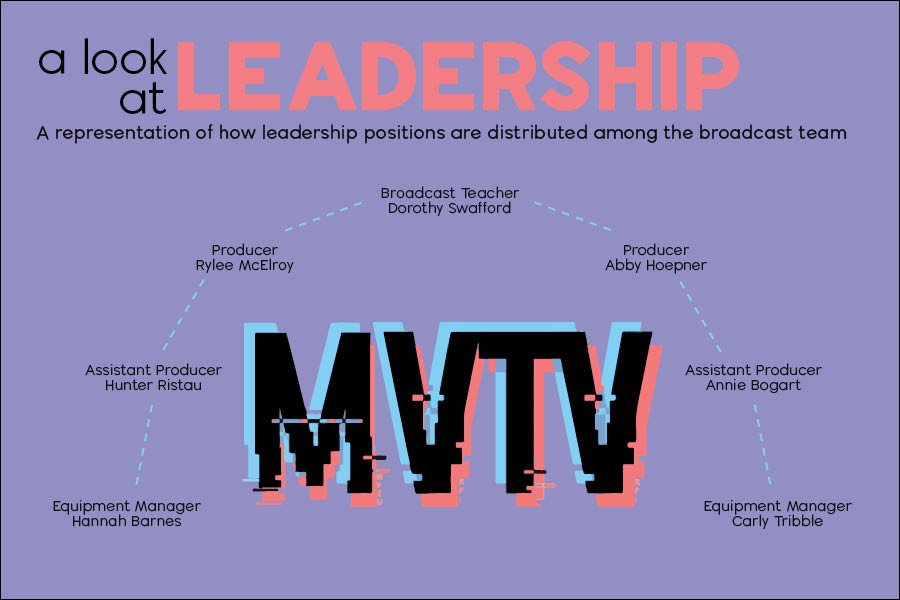 The room is filled with an air of anticipation as students bustle around the studio, hurrying to their places before MVTV goes live for their weekly episode.

A lot of hard work is put into airing a weekly episode of MVTV including story ideas, story assignments and schedules, filming and critiques. Behind the scenes, leadership plays an important role in how Broadcast functions as a team.

Junior Rylee McElroy is a producer for the Broadcast staff and holds only one of the many leadership positions available on the team.

“We have a lot of opportunities for leadership in broadcast because we all have a lot to do,” McElroy said. “We have producers, assistant producers, equipment managers and a morale leader who gets everyone together and makes sure that we’re all doing what we need to be doing.”

“[Leadership in broadcast] is very much a [trickle-down] effect,” Swafford said. “As far as leadership goes here, everybody that’s at a certain level plays a certain role. If they can’t fulfill their role, somebody else is coming in to help them with that role.”

Assistant producer Hunter Ristau has more responsibilities in his leadership position and has had to adapt to these.

“I balance it by going into every class thinking about balancing how much time I spend on each task so I can keep up with the pace,” Ristau said. “It takes a lot of outside the classroom work to make sure that I’m getting my own packages done and keeping up with the deadlines.”

Swafford has been impressed by the leadership she’s seen from her producers this year. She relies on them and calls them her “right hand.”

“Specifically, my producers do a great job of knowing what we have to do,” Swafford said. “They have the vision, they know our goals, they work extremely well with their peers, they are the first ones in and the last ones out and they know how to direct other students without taking over their job.”

The extra work in a leadership position for broadcast has been difficult at times for McElroy.

“[The extra work] is definitely something you have to get into the habit of,” McElroy said. “It was difficult at first but now that I’m used to critiquing, know what I need to look for and know how to handle the show every week then it’s become easier. I’ve definitely had to make it a priority in my life.”

Ristau plans to enter a journalism field in college thinks that his leadership position has helped prepare him for this.

“Now [I have] more leadership and it’s teaching me a lot more about the process of how I go about doing things,” Ristau said. “It’s giving me more of a real life outlook on how things are done in the real world.”

According to Swafford, how students maintain a leadership position is just as important as the position itself.

“I want [the leadership position] to be a part of their life, but I don’t want it to take over their life,” Swafford said. “If I can get them to balance and have fun with what they’re doing, my job is done.”

For McElroy, all the hard work put into Broadcast becomes worth it for her when she gets to see the final product.

“I really like every week when we get to see the whole episode come together because we all put a lot of work into it,” McElroy said.