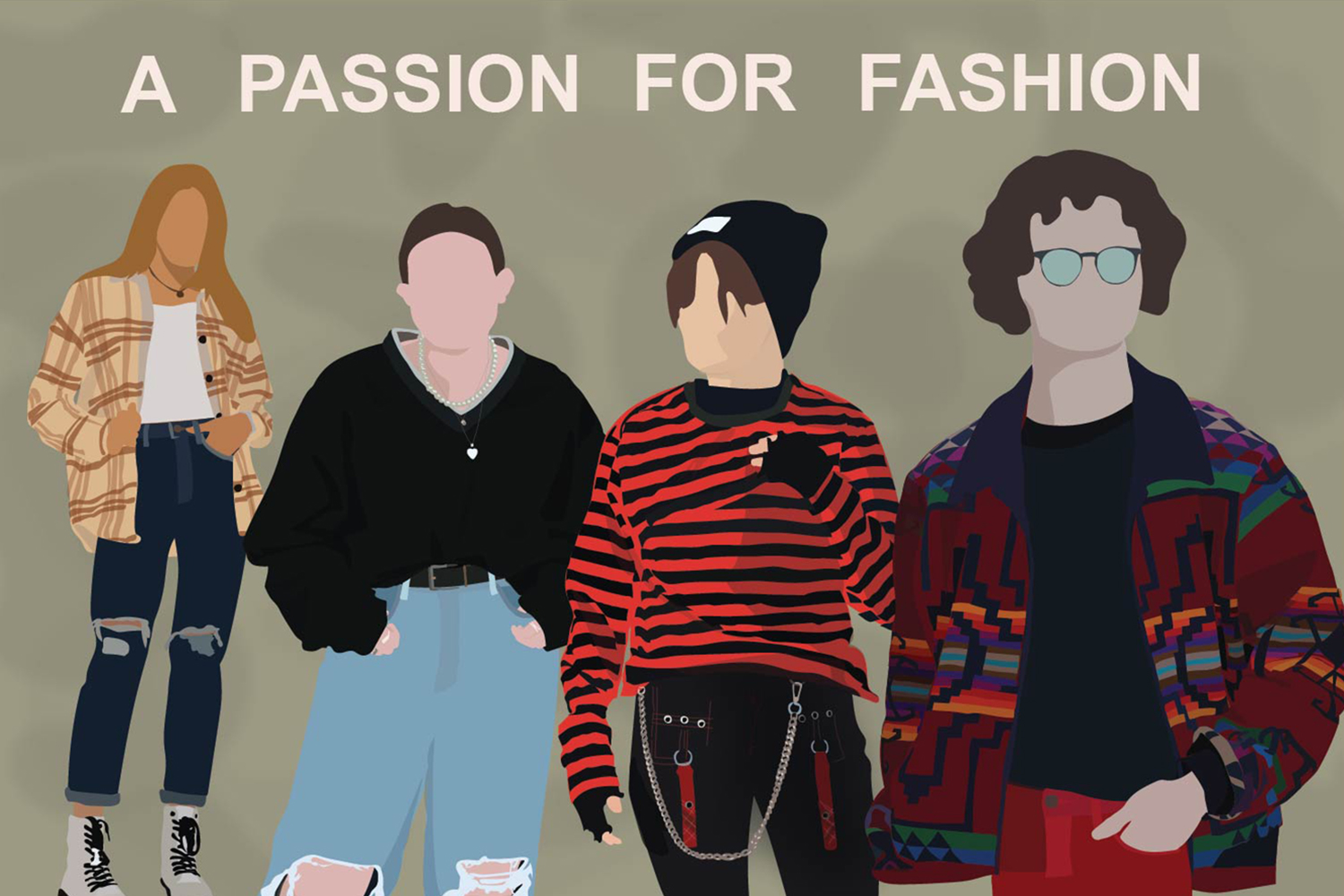 While walking the halls of the school, you may pass by a hundred students wearing similar, stereotypical “high school” outfits. But for some students, fashion is so much more than rolling out of bed and grabbing the first clothes they lay eyes on. For some students, fashion provides an opportunity to be themselves unapologetically. With styles ranging from grunge to simply feeling nice, these students explain how fashion influences their lives. 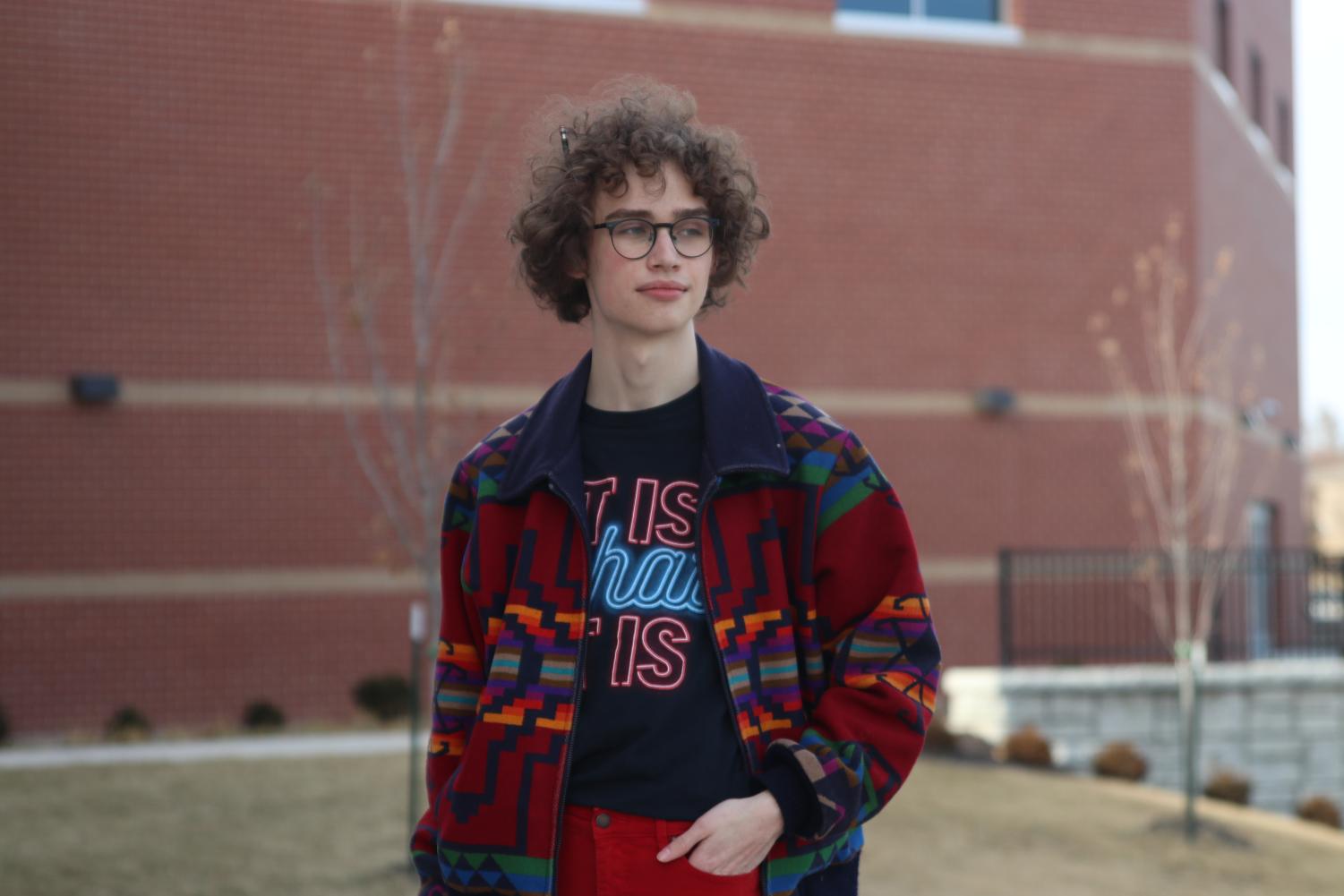 Hand in pocket, junior Sean Olin wears one of his favorite thrifted jackets. Most of Olin’s clothes come from thrift stores or his grandparents’ closets.

During the COVID-19 pandemic, people were forced to spend months of 2020 isolated in their own homes. This extended period of isolation led people to express themselves by exploring new creative outlets. For junior Sean Olin, this creative outlet was fashion.

“I started dressing the way that I do because it was hybrid school two years ago,” Olin said. “I wasn’t sleeping well because the sleep cycles were all screwed up from sleeping at home every day [for] half of the day. I just felt horrible, and I was wearing the same four outfits of the sweatpants and sweatshirt variety every week and I decided to renovate it a bit.”

Although he puts more effort into his style now, Olin still enjoys prioritizing comfort when at home.

“I count school and in public in the same category of trying to look a little fancy, but presentable most of the time, at the very least,” Olin said. “Versus at home, where it’s almost entirely oversized T-shirts and pajama bottoms.”

Olin, who buys the majority of his clothes from thrift stores, and occasionally uses pieces given to him by his grandparents, has found that people tend to have mixed reactions to his style.

“I’d give [people’s reactions to fashion expression] a C,” Olin said. “That’s a weird way of writing it, but I don’t think anybody is going to get beat up about fashion, but it’s not great. It’s not the worst. It’s suburban Kansas lukewarm.”

Although Olin has never been dress-coded, he explains his fear of wearing certain outfits to school.

“I do have a couple of crop tops that I like to take out sometimes,” Olin said. “I’m always a little scared that I’ll walk through the main hall and [administration] will call me out on it.”

While Olin’s new appreciation for fashion has challenged gender norms within the school, this has led to people making inaccurate assumptions concerning other aspects of his life.

“I was at play practice last year, and I’m standing there, just hanging out in some cool turtleneck,” Olin said. “A student walks up to me and goes ‘Hey, Sean, I love your style!’ I go ‘Thanks, I’m trying to dress less like sweatshirts and sweatpants.’ He goes ‘Yeah, that’s great. So are you, like, gay?’ Then I walked away from him.”

According to Olin, people tend to make these assumptions because male fashion tends to be limited, leading him to look into more stereotypically female fashion aesthetics.

“I do have to go into the female fashion types,” Olin said. “Because there’s three types of male fashion which are hoodies and sweatpants, suit and tie, or the scale of fanciness, and gay [with a] capital G. Without going gay, capital G, there’s not a lot there.” 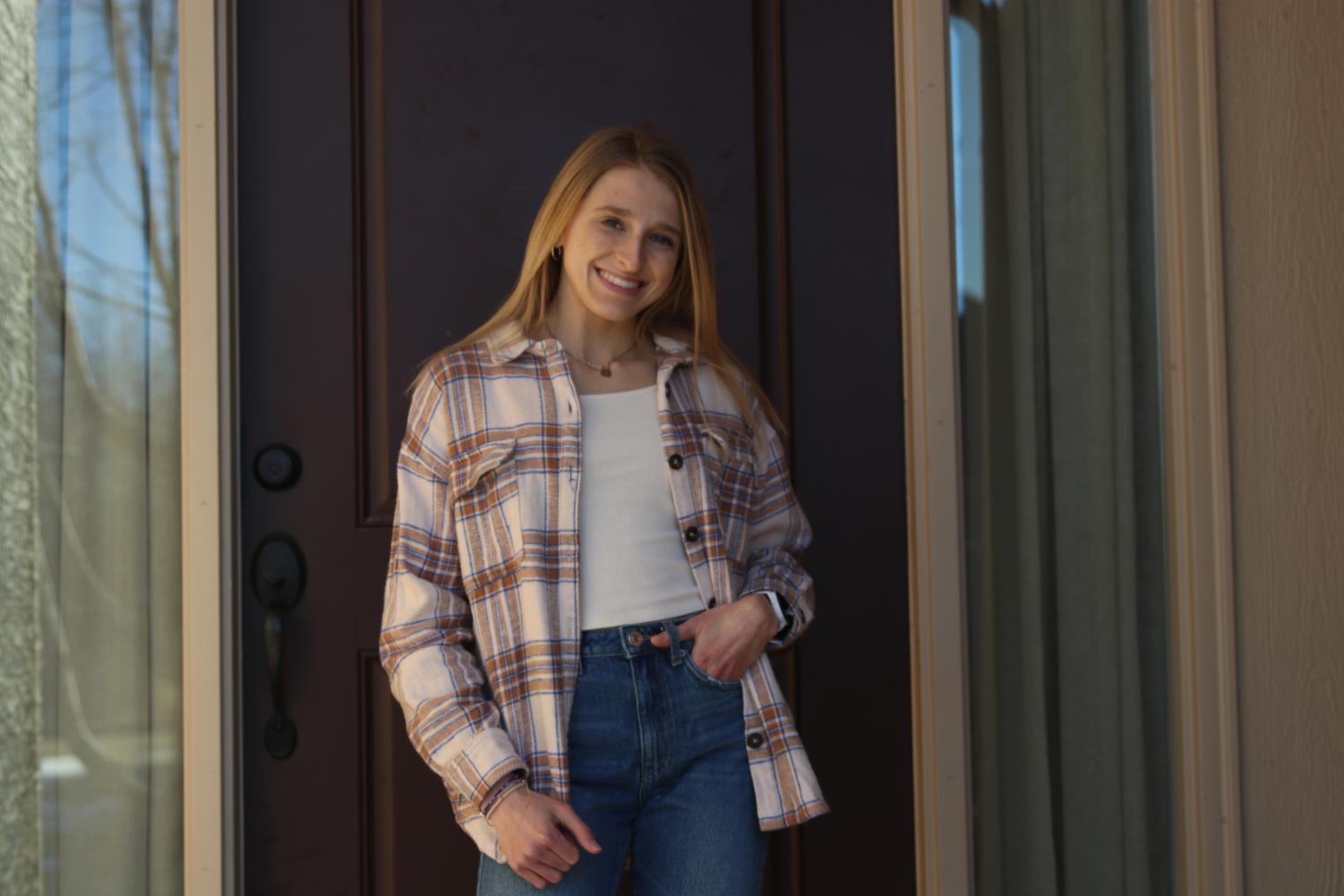 Through the COVID-19 pandemic, senior Bridget Roy established a style that fully embraces her love of accessories and shoes.

Bridget Roy finds love for dressing up through COVID-19 pandemic

Making light out of last year’s hybrid scheduling, senior Bridget Roy began experimenting with her style and trying out new looks. Taking advantage of social media, Roy shared her newfound love of fashion with others online

“Last year during COVID-19, when I had a lot of free time, I would take pictures and post them to my [Instagram] story,” Roy said. “[I would post] the outfits that I decided to wear, whether that was to school or to an event or anything, just to give people inspiration of what I like to wear. It wasn’t anything crazy, [I posted pictures] whenever I wanted to and whenever I felt confident in the outfit I was in.”

Although she is currently taking a break from social media, Roy continues to enjoy exploring the world of fashion. She believes that the variety of options allows each person to uniquely present themselves.

“I think [fashion] is a really valid form of self-expression, and I think it is something that public school [students] get the choice to do,” Roy said. “I feel like a lot of people take that for granted, but I feel like it’s really important for people to dress the way they love and not feel judged and pick what makes them feel confident and unique and express themselves.”

Roy has a love for many different kinds of accessories, which she enjoys incorporating into her various outfits. However, her love for shoes is particularly strong.

“I always wear my running watch,” Roy said. “I love gold necklaces and jewelry, hair clips and my shoes. I love all different kinds of shoes. Nike, Air Maxes, XCs and all those different types, and I love customizing them and making them my own. I definitely like to express myself through shoes.”

Even though Roy has not struggled with it herself, she feels there is a pressure for many girls to dress similar to one another.

“I know that a lot of people fall under the pressure of dressing like each other to fit in,” Roy said. “I feel like that is something that I haven’t struggled with, but I know a lot of people do in high school, just trying to wear exactly what others wear so that they can feel like they fit into that stereotype of the typical high school girl.”

Ultimately, Roy aims to and believes that people should dress in ways that make them confident instead of conforming to how other people dress.

“I dress the way I do because it makes me feel confident,” Roy said. “It shows a lot about your personality and a lot about who you are by how you dress. I feel like that’s really prominent in why I choose what to wear. Whether that is my Christian beliefs or what sports team I love, we all have different ways of expressing and sharing who we are through what we wear, and I feel like that’s really important.” 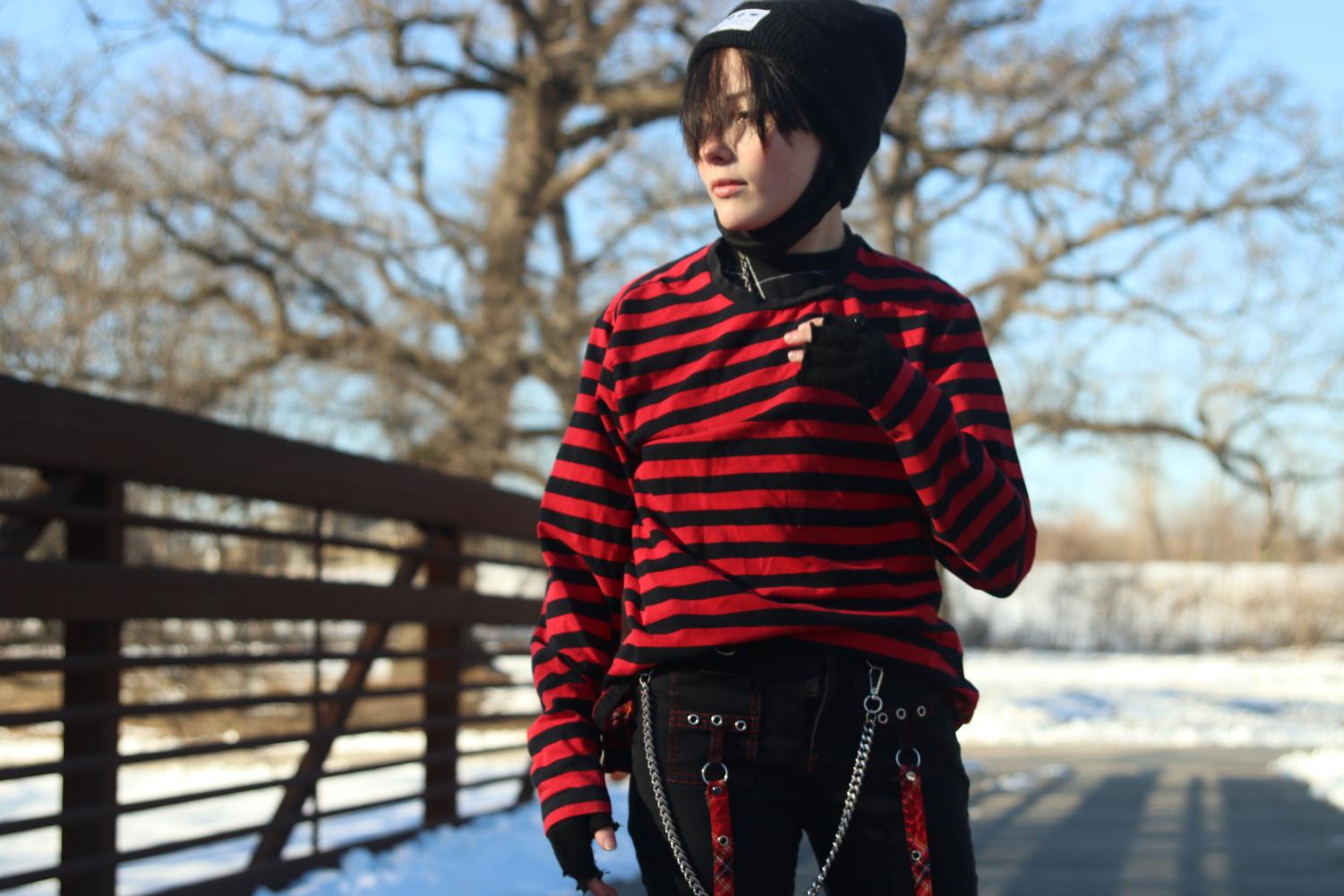 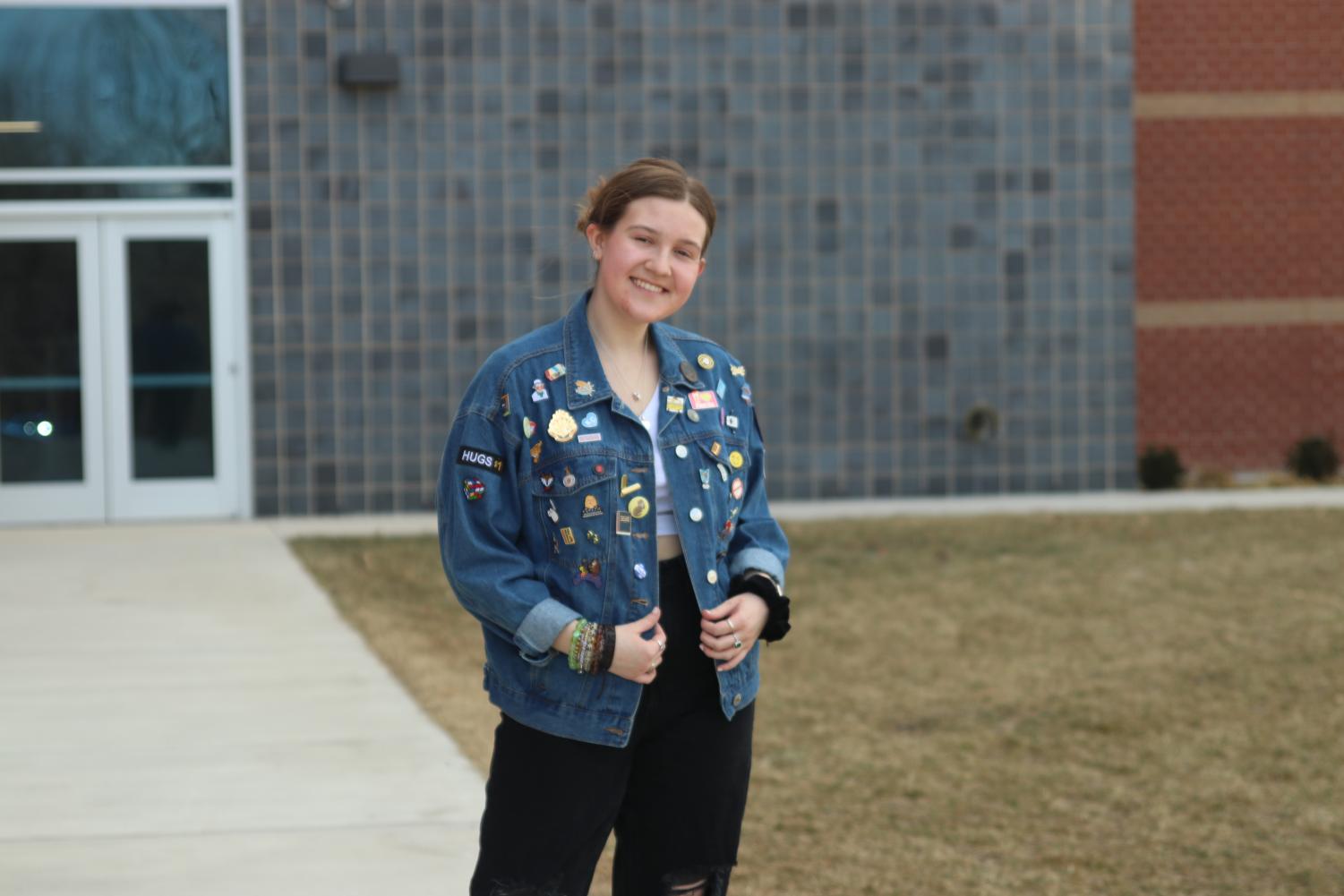 High school can often be defined as a time for students to reinvent themselves, and for junior Asa Esparza, this couldn’t ring more true. After years of worrying over her image, exploring her fashion options allowed Esparza to gain more confidence and be her true self.

“I struggled a lot with my self-image and finding myself,” Esparza said. “In middle school and the beginning of high school, I would wear things and then I would think, ‘Oh my gosh, am I copying everyone around me?’ … Eventually, I found something that made me feel happy. I got compliments from people who matter to me. When you get comments from people who are close to you, it just hits a lot differently.”

Esparza, whose style takes inspiration from the ’90s, emphasizes the importance of students being honest in their self-expression, no matter where they may be.

Despite enjoying styling many of her fashion pieces and accessories, Esparza still has a favorite item: a jacket that acts as a record of her travels.

“I have this jean jacket that I have had since middle school, and I like collecting pins wherever I go,” Esparza said. “I think I have 38 pins on [the jacket], last time I counted. It’s a nice track of where I’ve been, and I look at it and it brings back memories, so it’s a really nice thing. It catches attention and it starts conversations.”

Although Esparza believes in creating a unique style, she often uses the fashion of others around her and on the internet as sources of inspiration for her own looks.

“I’ll see something that [someone at school] is wearing and I’ll be like, ‘I like that piece, how would I style it, how would I make that my own?’” Esparza said. “I follow a couple of “vintage” accounts [on Pinterest] and I really like to go thrifting, so I’ll go thrifting and get my inspiration from pieces I see there. I think, ‘Every piece has a story, how can I tell that story?’”