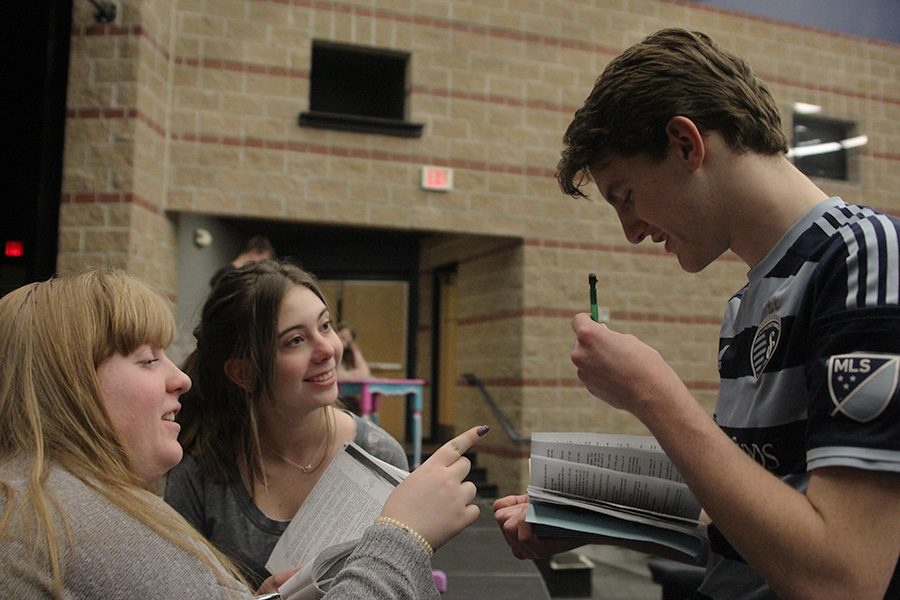 As the lights dim in the Little Theater, spectators anticipate the beginning of a story told on stage by actors, dancers and singers. The audience’s eyes are glued to those under the spotlight, but it is student directors behind the scenes that make the production possible.

For junior Chloe Griffin, student directing was appealing because she loved theater, but didn’t know if being onstage was the best fit.

“I originally started student directing because I really enjoy our theater department.” Griffin said. “I think it’s a really great department, but I knew that I didn’t have a really great memory to continue being an actor, and I really hated dancing and singing.”

A sibling’s experience being a student director is what inspired sophomore Claire Burke to apply for the position.

“My older sister, [graduated alum] Whitney Burke, started student directing her sophomore year, and when I got here it was her last year directing as a senior,” Burke said. “I saw what she was doing, saw how involved she was, saw the friends she made through it and I knew I wanted to do that.”

The appeal of being able to get involved with every stage of a show as a leader was something enjoyable for the student director of the “The Boyfriend”, sophomore Taylor Moss.

“[I like] being able to help in all aspects of a production, and not just the one aspect I would be,” Moss said. “It’s been cool to see how it all works, and what we get to write in the script to make sure everyone gets their blocking.”

Student directing allowed Burke to see a show develop from an unfamiliar script to a well-rehearsed, final production.

“I love being able to see the show come together. Since I’m there every rehearsal, I see all the funny things the actors do as they’re starting to learn their lines … I get to see the script take a new shape through the actors,” Burke said. “I’ve seen how much work students put into this, and how much everyone cares, and it’s super great to see all these people come together to make a great production.”

As a cast member for numerous theater productions, sophomore Madelyn Augustine values the work that student directors do for the productions she’s been in

“I think that [the student directors] do a really really good job,” Augustine said. “I think that they try their best and that’s all you can hope for because student directing, and trying to oversee other students who are your age and be viewed as a figure of authority … can be really hard.”

As a sophomore, Burke recognized that she was younger than most of the people she was directing, but has grown more sure of herself over time.

“When I first started, I was really nervous because a lot of these kids are older than me, and I was worried they wouldn’t listen to me,” Burke said. “Since becoming a student director, I’ve learned the importance of being confident, being a better leader and being sure in my decisions.”

According to Griffin, student directing has helped her to step out of her comfort zone and bring out the best in other people and herself.

“I used be a very nervous person. I still am extremely nervous most of the time, but I’ve learned to fake it ‘til I make it, so nobody ever knows that I’m nervous,” Griffin said. “It really helps to be around a lot of people who are constantly acting, and are able to show off their skills. Seeing them achieve things makes me more confident because I know that even if it’s a small part, I still had a little bit of a part in seeing them achieve.”