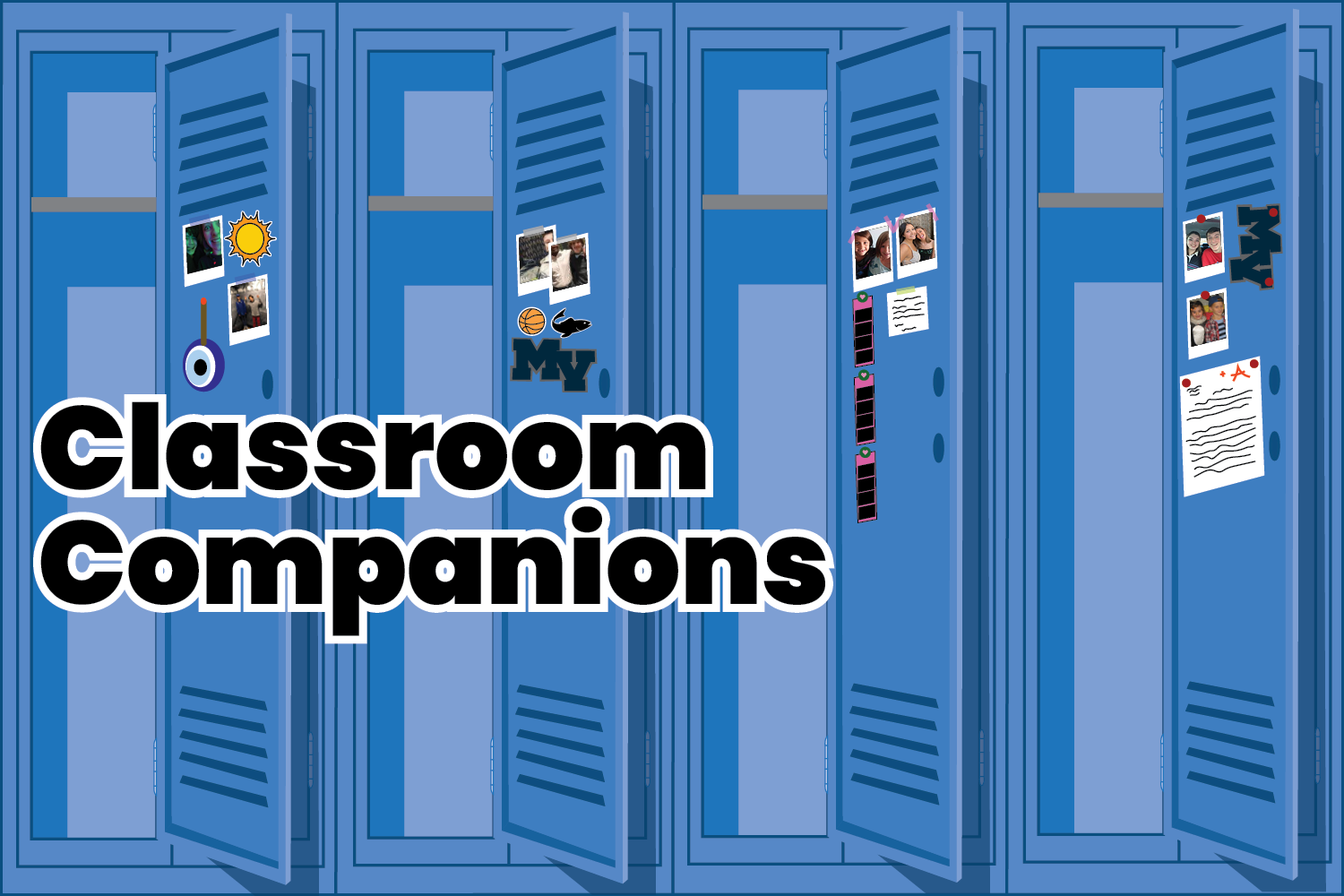 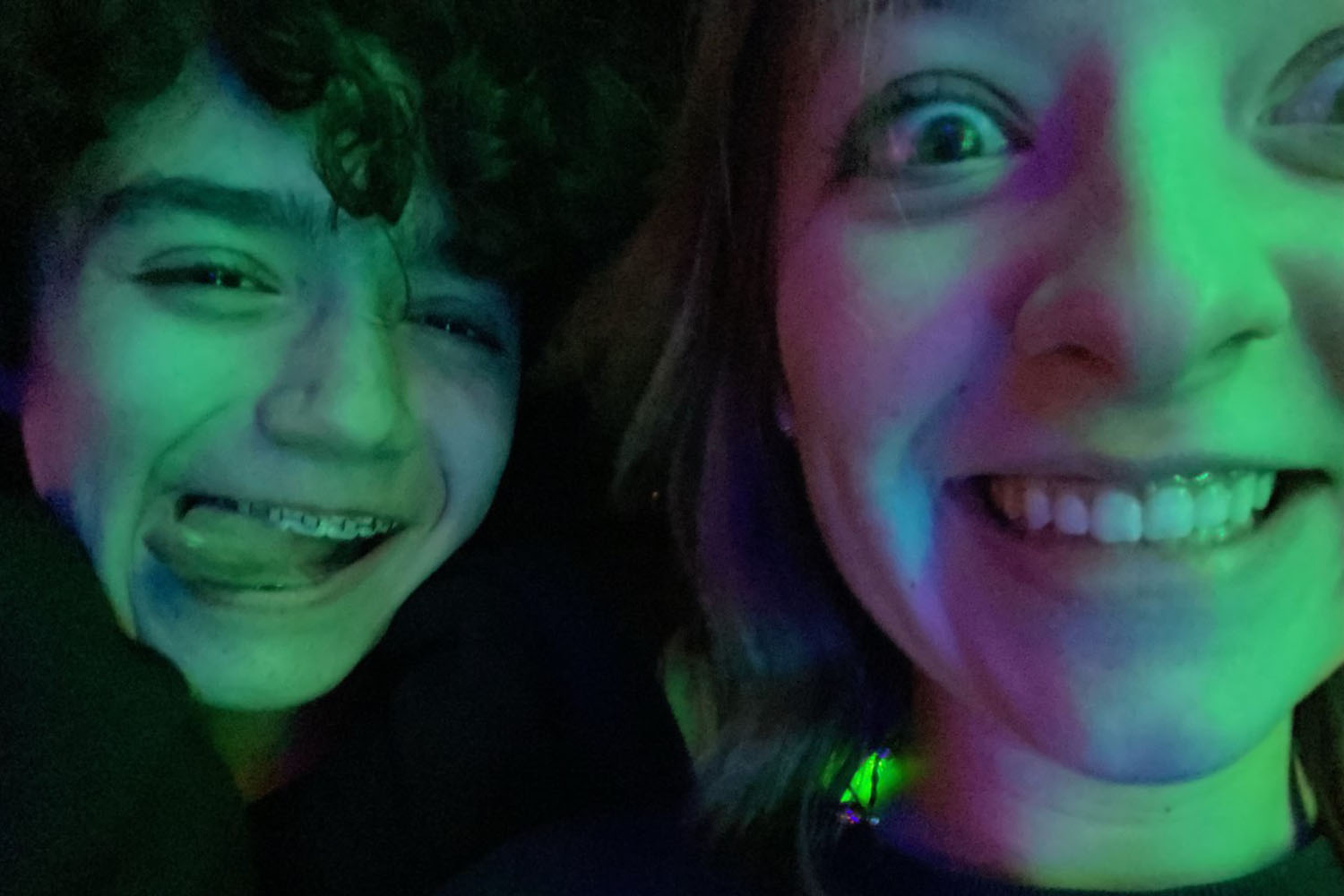 While taking a selfie together in fun lighting, freshmen Maddox Walker and Reagan Swartz smile at the camera.

Beginning their friendship in early elementary school, freshmen Maddox Walker and Reagan Swartz have had ups and downs, but overcome them and have grown their nine year friendship

After meeting in kindergarten and growing their friendship over the years of elementary school, freshmen Maddox Walker and Reagan Swartz are ready to take on high school with each other.

The two find themselves out and about, but Walker prefers their more casual hangouts.

“We like to go to Walmart and shop or just walk around,” Walker said. “But my favorite thing to do with Reagan is when we watch movies and share music with each other.”

Throughout their friendship, Walker and Swartz have made many memories including buying pets together and making social media for them.

“I think our friendship stands out because one time we went out and bought pet lizards together,” Swartz said. “ One time we also made YouTube channels for our new pets, and no one else can say they’ve done that.”

Walker likes many things about Swartz but finds that her intellect and humor are his favorite.

“It’s hard to pick what I love most about Reagan, but I love how smart she is. She is very good at math and biology,” Walker said. “She is also the funniest person I know and has a really good taste in music.”

Even though Walker and Swartz are best friends, they have had some conflicts, but they always make up in the end.

“We had this rule in fourth grade where if you had to leave then you could make everyone play whatever game you wanted for the last five minutes. My neighbor and I didn’t like the game Maddox chose so we stopped talking for a week,” Swartz said. “Then, we told him he could come over and we would do whatever he wanted for the whole day

Walker thinks that his friendship is different from others because of their shared hobbies and how they do them together.

“What stands out most about my friendship with Reagan is that we live to watch movies and listen to music,” Walker said. “We like to watch or listen to them and spend hours talking about it. I don’t think many others do that.” 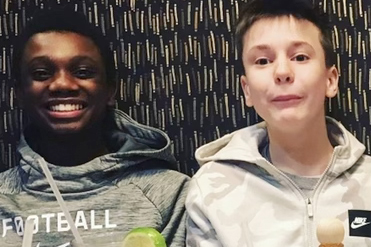 Sitting next to each other at a restaurant, sophomores Nate Carter and Jake Fisher make silly faces with each other.

Despite being separated from each other during middle school, sophomores Jake Fisher and Nate Carter have been able to maintain their friendship for 10 years

Following their first time meeting each other in elementary school, sophomores Jake Fisher and Nate Carter have been able to maintain their 10-year friendship; despite going to different middle schools from one another. Carter describes the moment when he and Jake met for the first time.

“We met in first grade and have been best friends ever since. We met each other at Horizon Elementary School in Mrs. Brazil’s class,” Carter said. “We have the same sense of humor so we’re always laughing at everything. We’ve also been playing basketball and football together since we were kids.”

As stated before, Fisher and Carter were separated when they each entered middle school. Fisher explains how that affected his and Carter’s relationship initially.

“We have our fights, but once we went to separate middle schools our fights became more common,” Fisher said. “I went to Monticello Trails Middle school and Nate went to Mill Creek Middle School, so we didn’t see each other as often as we used to. But we were able to get through it once we reunited in high school.”

In spite of going to different middle schools, Fisher and Carter were able to rekindle their friendship once they got to high school. Carter expresses how they’re able to brighten each other’s moods while still letting the other person know they’re there for them.

“We laugh at everything when we’re together. We always try and make every situation fun or funny when we’re together in order to lighten our moods,” Carter said. “Even though we do like to laugh and joke around, we always make sure that we’re there to help each other through tough situations.”

On top of having the same sense of humor, Fisher and Carter also play on the same sports teams with each other. Fisher describes how playing sports and being around each other have helped strengthen their friendship. 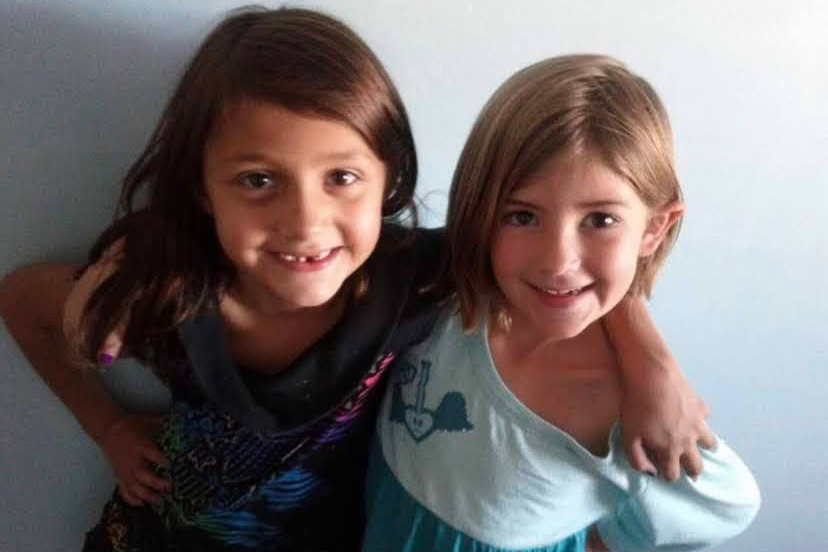 Arms around each other, juniors Hayden Rider and Jane McDaneld pose together.

Brought together by their sister’s and their families’ close bond, juniors Jane McDaneld and Hayden Rider have been friends for nearly 12 years

After meeting at their older sister’s softball games from a young age, juniors Jane McDaneld and Hayden Rider have had a close bond spanning over 12 years. Rider believes that the reason behind their close friendship is due to the sisterhood that the friendship has created.

“I would say that our friendship is special and it’s different from others because it’s more of a sisterhood. We’re attached at the hip 24/7,” Rider said. “We do everything together and even the littlest things, I tell Jane, even if it isn’t super important to her life I still tell her and she’s always proud of me and supports me no matter what.”

Stemming from the sisterhood aspect of their friendship, McDaneld and Rider are extremely supportive of each other. McDaneld describes how that has brought them closer.

“I like how Hayden’s very supportive and she is very selfless and will do anything for me and I know that,” McDaneld said. “No matter what happens, even if it’s something stupid and simple that happens throughout the day, we know everything that the other is doing. We tell each other every little thing.”

Additionally, McDaneld and Rider’s mothers also maintain a close relationship. McDaneld explains how that has allowed their friendship to grow.

“Our moms are best friends and we always work everything out. If we fight or something, we always work it out,” McDaneld said. “I feel like we’ve gotten to the point in our friendship where we can just say if something is bothering us and we won’t be scared if the other one is going to be mad.”

On top of spending a lot of time with one another, McDaneld and Rider also work together. Rider mentions how that has allowed their bond to become stronger.

“Jane and I do everything together so we’ll go on drives, we’ll watch movies and shows together, we’ll go on little lunch or dinner dates. Even if it’s just us sitting in Jane’s room for two hours and not talking but we’re together, it’s just what we do,” Rider said. “We also work together, so that has also made us closer; and everyone at work knows we’re best friends so they’ll always correlate us together.”

“In middle school, Hayden fell in a trash can and got ketchup all over herself and had to go to change in the nurse’s office,” McDaneld said. “She ended up wearing an Elsa shirt from ‘Frozen’ for the rest of the day.”

“Some of my favorite memories with her are from when we were kids and we would go to our sister’s softball games and we would play in the dirt. We would always play house with each other and I was always the mom and Jane was always the baby,” Rider said. “We’re always doing stuff together and anytime I’m with Jane we always create such amazing memories together.” 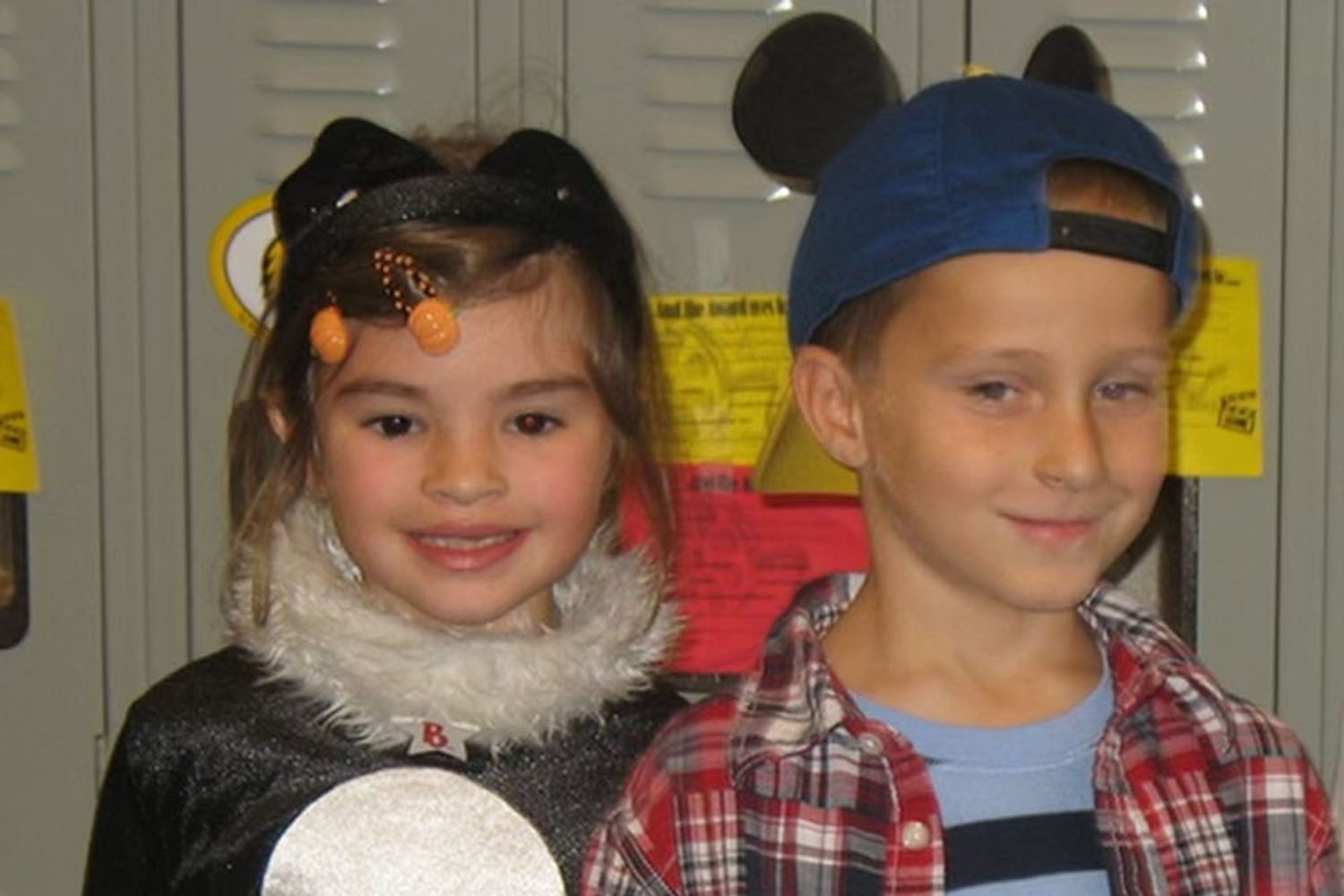 Dressed up in Halloween costumes, six-year-olds Grace Emerson and Noah Webber smile for a picture together before their elementary school costume parade Friday, Oct. 29 2010.

Through similar interests in academics and complementary personalities, seniors Noah Webber and Grace Emerson have successfully maintained their coed friendship for 11 years

Since their friendship began with light-hearted banter in first grade, seniors Noah Webber and Grace Emerson have been best friends. They find solace in each other through years of difficult classes.

According to Webber, he finds that Emerson has many traits that make her a great person; and they think very similarly. He also believes that Emerson is great at bringing him comfort.

“I’m friends with Grace because she is independent, intelligent and incredibly funny. We often can finish each other’s sentences,” Webber said. “She has always been someone I can talk to and she has been a great resource when I am going through any time of hurdle.”

Emerson appreciates Webber’s ability to connect with others through his sense of humor in addition to his lack of care for what others think about him.

“I admire his sense of humor. That might seem trivial, but I think sharing a sense of humor is a great way to connect with people,” Emerson said. “I also admire his ability to keep being himself despite what other people say. He’s still largely the same person I knew in elementary school.”

Academics offer the main foundation for Emerson and Webber’s friendship. Through sharing many classes together and finding interest in similar things, their friendship flourishes.

“Like most elementary school friendships, we were friends through first grade and then somewhat moved on since we didn’t have classes together past first grade until fifth grade,” Webber said. “We have had many of our classes through middle and high school together, so it has been easy to stay in touch, plus we have many similar interests.”

While Emerson agrees that they are very similar, she believes that their differences also contribute to their friendship. Webber’s carefree nature compliments her more intense personality.

“I’m friends with Noah because both of us complement each other yet we share similar interests,” Emerson said. “Sometimes I can be serious and get hyper focused on schoolwork, but Noah’s lightheartedness always reminds me to relax and try to enjoy myself during the school year.”

Even though their friendship stemmed from their common trait of academic competitiveness, Webber believes they worked through any issues it brought up.

“We became friends because we were both pretty smart and therefore we were competitive,” Webber said. “I don’t think it ever hurt our friendship, but we just had to figure out how to avoid conflict because of our competitiveness.”

Emerson notes that their coed relationship sets them apart from others. Despite what many people around them think, Emerson and Webber have never dated and are simply very good friends.

“I think our friendship stands out because we’re probably one of the very few long-lasting boy/girl friendships. In middle and elementary school, it was always considered a little weird to be good friends with someone of the opposite gender as you,” Emerson said. “I was frequently asked if Noah and I were dating—we never did—and it used to bother me because I couldn’t grasp why people couldn’t understand that men and women can be friends without romantic intentions or feelings.”