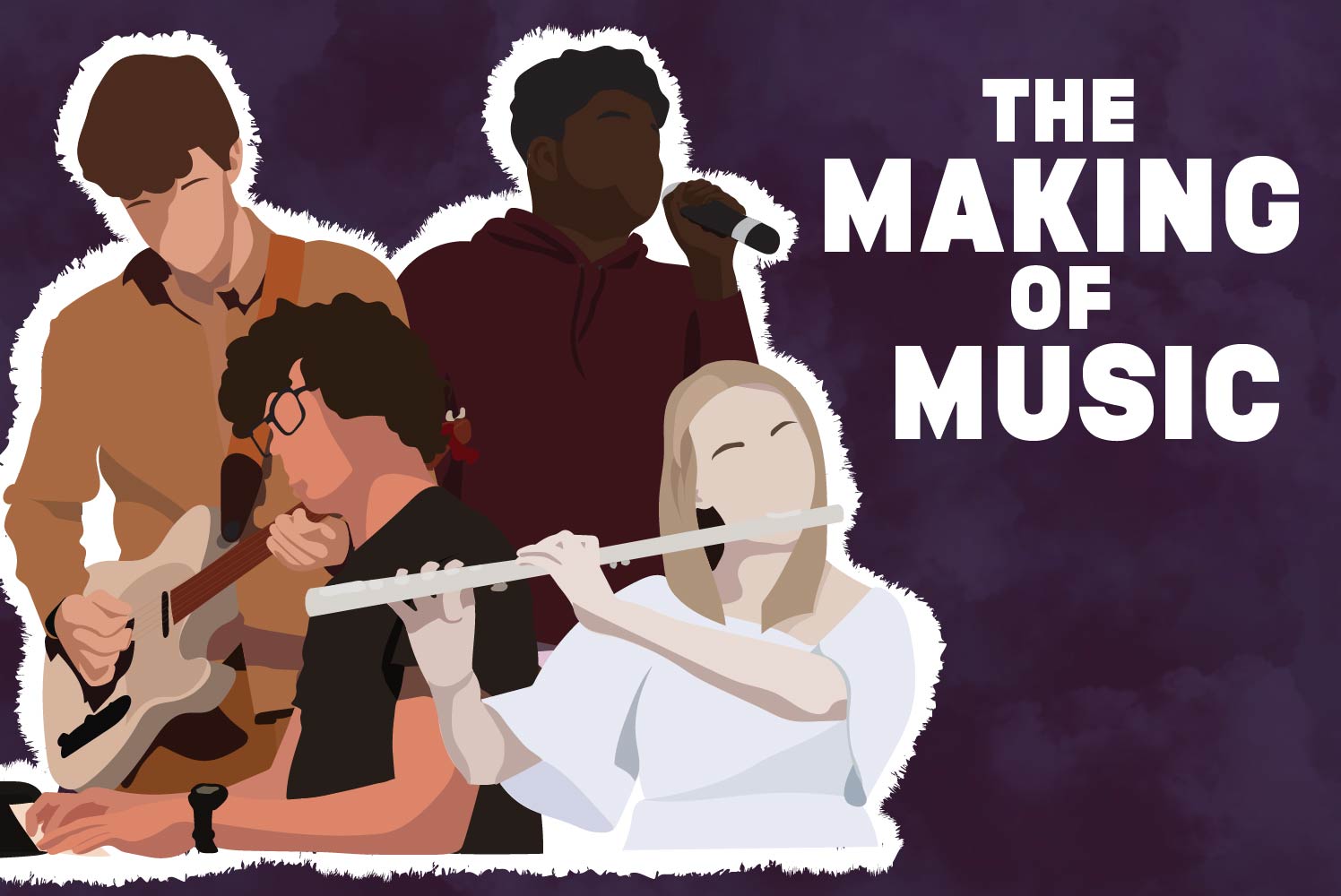 Students across the school perform, compose, and produce music 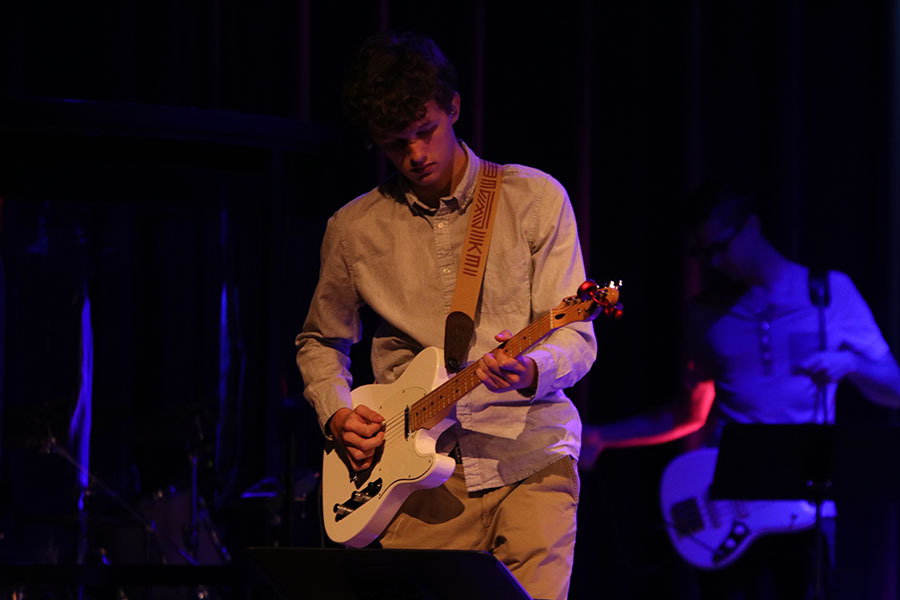 In front of the congregation at Grace United Methodist Church, junior John Fraka plays his guitar in worship on Sunday, Sept. 29.

As congregation members slowly filed into Grace United Methodist Church for Sunday morning services, the church’s musicians, gathered in a corner of the stage, rehearsed. A vocalist went through her warmup drills. A pastor prepared his sermon. In the middle of it all, junior John Fraka softly strummed E minor.

Fraka has dedicated the majority of his time to music. He’s the first chair alto saxophone in Mill Valley’s jazz band and symphonic band, earned a spot as the district band’s lone jazz guitarist last year and was recognized as the Kansas All-State jazz guitarist last year. He also works a $30-an-hour weekly gig as his church’s guitar player during worship.

Fraka estimates that, on top of an already exceptionally busy schedule, he practices guitar for at least an hour every day in addition to his band classes and rehearsals.

Fraka wasn’t born with the affinity and appreciation for music he has today; however, when an opportunity arose for him to begin playing guitar, he seized it.

“I started [playing guitar] in fifth grade, but then I dropped it because I thought this is kind of lame,’” Fraka said. “Then in seventh grade, I was going on a mission trip. They needed a guitar player for the youth group. I told them, ‘I did that in fifth grade. I’m pretty sure I could pick this up pretty quickly.’”

During that mission trip, though, Fraka was hooked. He loved the experience of playing guitar, and wanted to make it a regular part of his life.

“I got a cheap acoustic guitar and I started playing that,” Fraka said. “I just kept going, and I’ve kept going ever since.”

To fulfill his desire to play even more music, Fraka also joined a band, Reviver. The band, which also features physics teacher Chad Brown as a guitarist and vocalist, has been an outlet for Fraka to show off his talent.

While Fraka has already gotten a couple gigs with the band, Brown hopes to continue expanding their opportunities.

“We played a back to school party for some of the teachers here,” Brown said. “We’re playing at a pumpkin patch … and we have a couple other gigs, possibly in the near future, but we are just … getting [started].”

Brown credits a lot of their success to efficient networking.

“It’s a lot of marketing,” Brown said. “We have business cards, we have a Facebook page, we have an Instagram account. Our drummer takes care of a lot of that … and has the knowledge that has been putting us out there.”

For Brown, the end goal is for the band Fraka’s in to continue playing more often.

“I’d like to be gigging at least once a month,” Brown said. “We’d like to record eventually, I’ve been writing some original material.”

While Fraka enjoys the success that music has brought him, he continues to play simply because he likes it.

“I just play music because it’s fun,” Fraka said. “I enjoy it and, apparently, people say I’m good at it.” 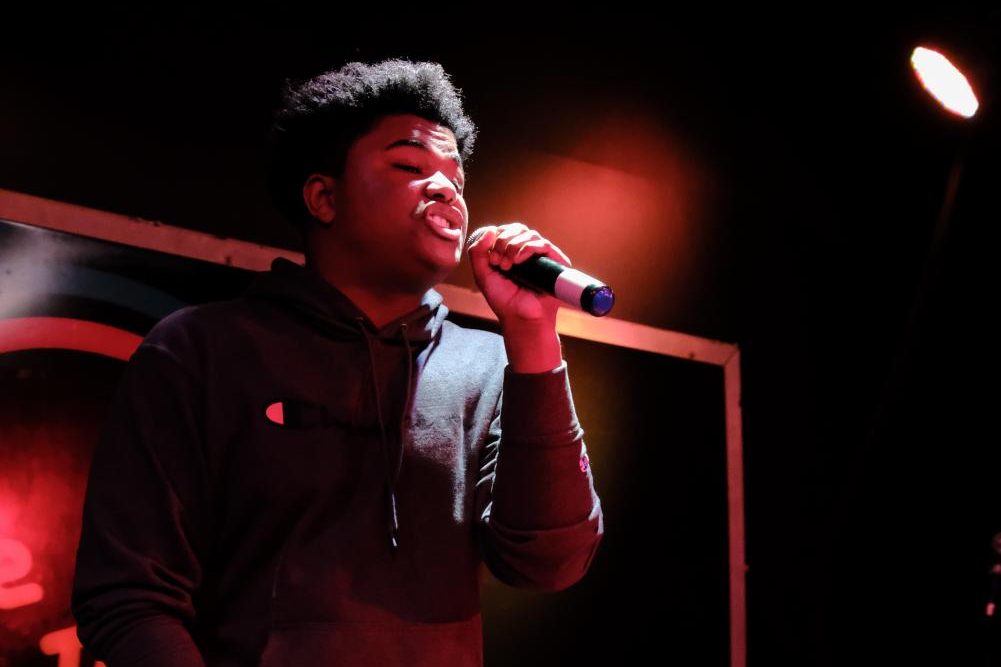 Rapping into the microphone on stage, junior Drew Morgan, also known as Lil Paula, performs at The Roxy in January of 2020.

As time passed, Morgan’s love for music grew more fervent, until in 2018 he finally decided to begin recording and producing his own songs. With the exception of his most popular track “Double Cup (ft. Secluded),” which Morgan produced in a KCMO studio, all of his songs have been mixed in Morgan’s home studio in his bedroom.

So far, Morgan’s written and produced eight songs, six of which are available on Spotify under his stage name “Lil Paula.” In addition to his recorded singles, Morgan also performs live; his first show was in November 2019, and since then, he’s performed at least one live show every month.

For Morgan, learning to become a part of the hip-hop community has been a highlight of his musical career.

“The rap community is a very competitive but fun community to be a part of. At first I was more focused on trying to prove myself as a rapper, but I realized that’s not what it’s about,” Morgan said. “It’s about the music you make, not the persona you are.”

He’s also picked up on advice and life lessons from members of the community about originality and authenticity.

“The people I’ve met have really pushed me to do my own thing when it comes to music,” Morgan said. “I remember when I started, I wanted to be just like all the other rappers, but the people along the way taught me that in order to make it, I have to be authentic.”

In the future, Morgan hopes to tour outside Kansas City and Missouri and release his first full-length album in 2021. Wherever his music career goes, Morgan will always credit music for its positive effect on his outlook on the world.

“Music has a huge soft spot in my heart and always will,” Morgan said. “I think that it definitely changed my life for the better.” 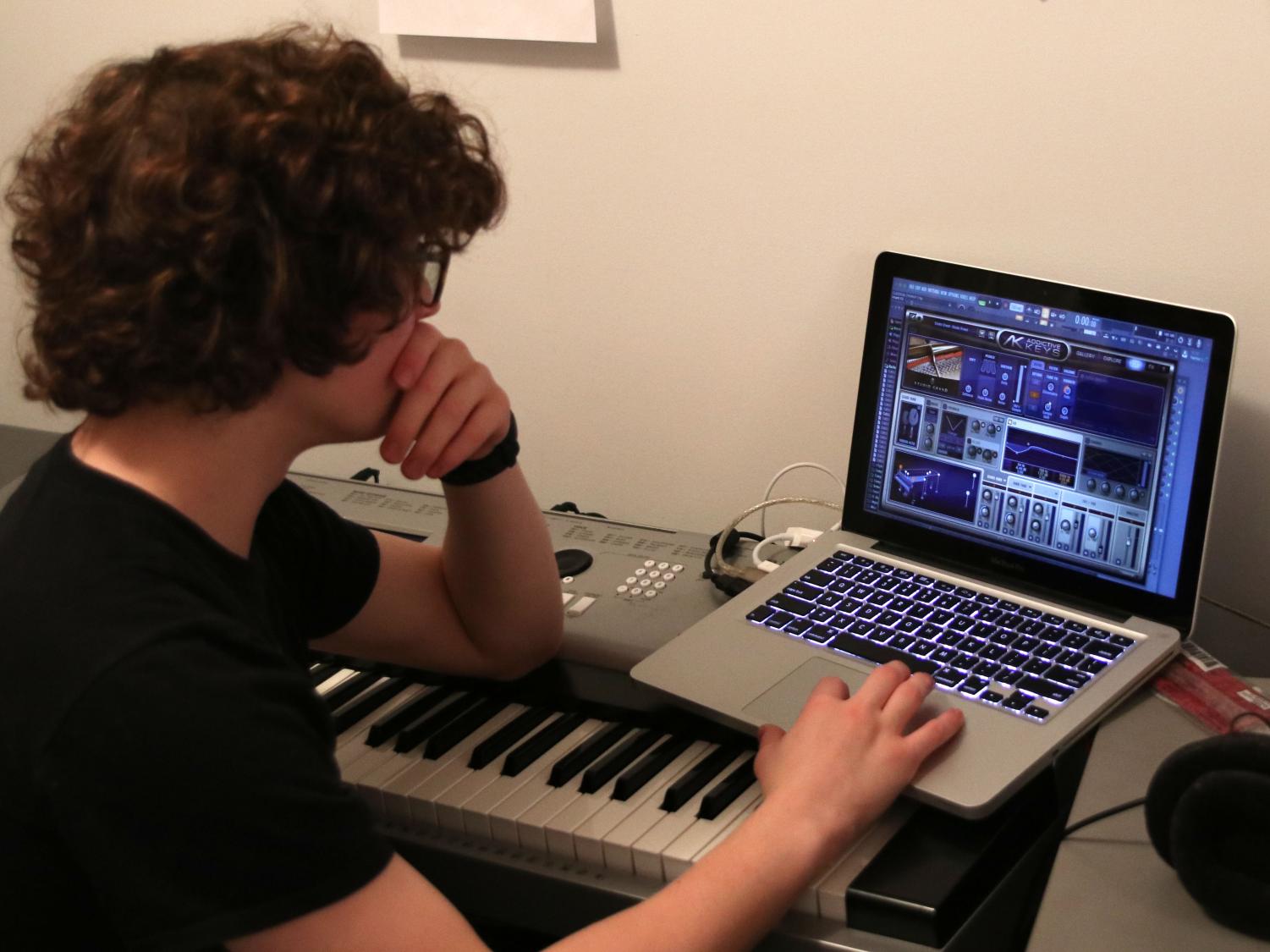 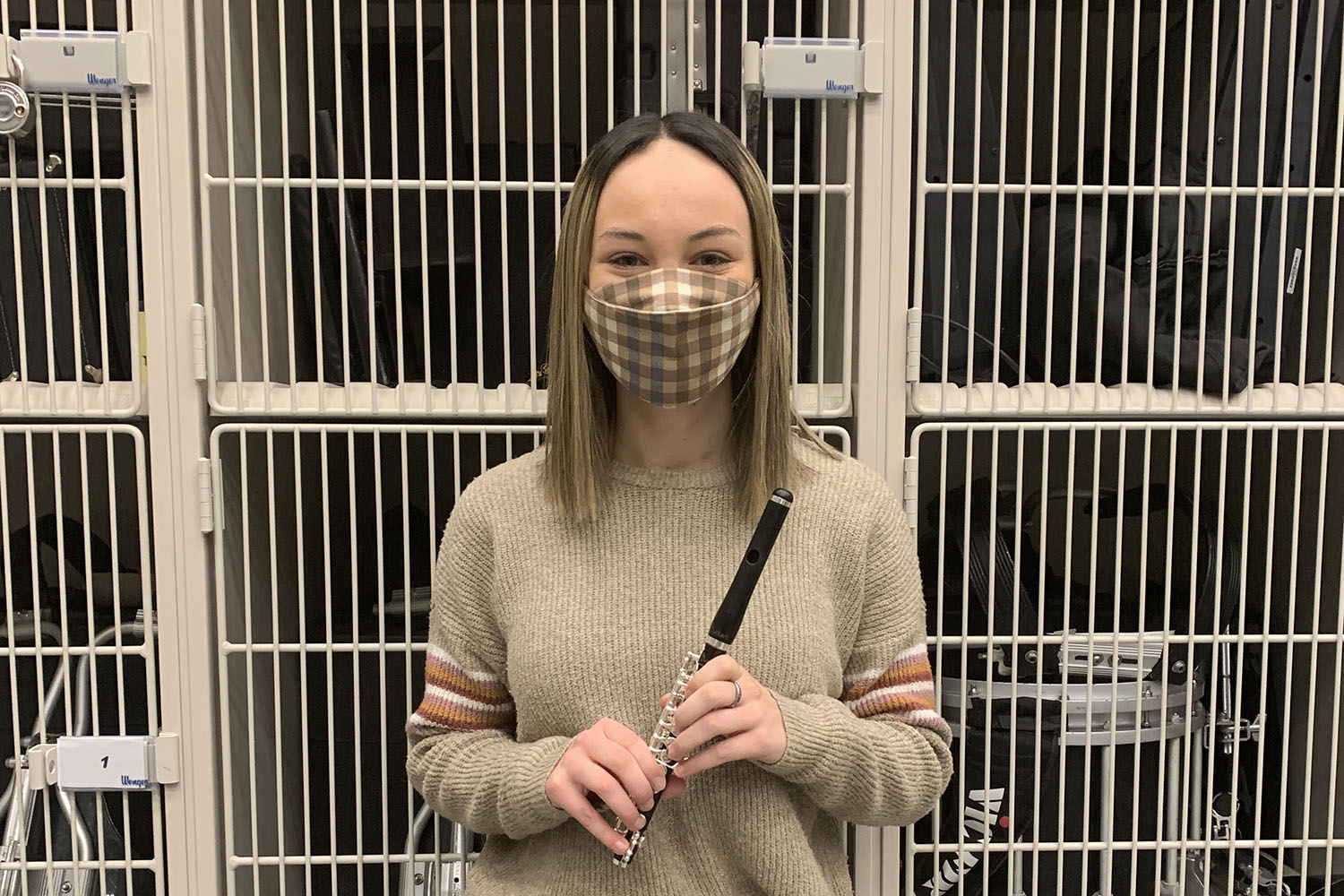 Following in the footsteps of her mother, who’s been playing the flute since elementary school, and her grandfather, who was a college band director in Louisiana, senior Ella Greenup decided to play the flute at ten years old and join the family’s musical roots.

“My skills have improved over the years mostly because I have been taking private lessons since I first picked up a flute,” Greenup said. “I used to not enjoy playing all the technical stuff, but now it’s some of my favorite things to learn because of the challenges it brings.”

Wanting to get more involved and advance her skills further, in eighth grade Greenup auditioned for symphonic band, which she was one of three freshmen to make it into the band. Greenup has been a member of the symphonic band for four years and has been first chair for two years.

Being a member of the symphonic band has helped prepare Greenup for college courses.

“Symphonic has really challenged me with difficult pieces and it has mentally and physically prepared me for band in college,” Greenup said.

Greenup was accepted into All-State band as the only piccolo player, which came as an unexpected surprise.

“Being the top piccolo in Kansas really came as a shock for me because there’s only one piccolo spot in the All-State band,” Greenup said. “Unlike the 13 flute spots, It means I have to set an example for those around me and help when I can to help create more amazing musicians.”

Being a member of All-State band validated all of Greenup’s hard work and changed her perception on playing written music.

“Becoming a piccolo for the All-State, not only means that I’m the best piccolo in Kansas, it means that all my hard work that I have been focusing on for the past seven years has paid off,” Greenup said. “I always think of music in a different way now because I now never look at music and think “jeez that looks hard” I think, “what can I do to nail that section?”

“I plan on becoming a marching Wildcat at K-State, and joining some of the large ensembles,” Greenup said. “I hope to become a middle school band director.”

Greenup recommends that anyone who wants to play an instrument take private lessons, as these lessons helped her perfect her musical abilities.

“If you want to get into music, I highly suggest taking some sort of lesson, either through Steiner, or take private lessons outside of school,” Greenup said. “It is totally worth it in the end.”