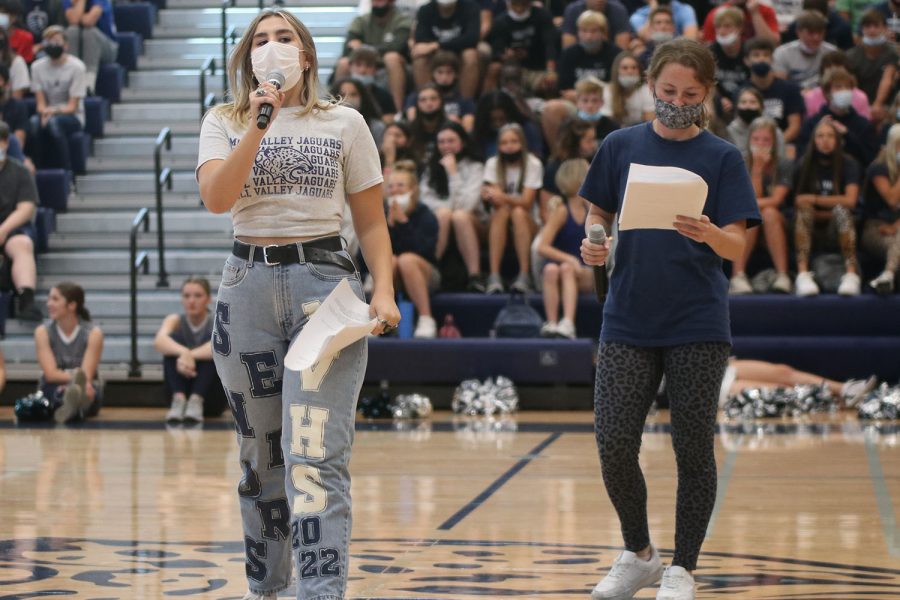 The Homecoming pep assembly took place Friday, Sept. 24 and involved many fun activities to get students excited and bring school spirit back

StuCo held their first pep assembly in over two years Friday, Sept. 24. The assembly celebrated this year’s homecoming week and recognized all of the athletic teams that won state championships last year

This assembly had a good start as the energy not only matched assemblies of the past, but may have even succeeded them according to senior Bret Weber.

“I think after not having a pep assembly for over a year and a half, students and teachers were ready to go back to supporting one another and have some fun,” Weber said. “Our two MCs did an amazing job keeping the crowd hype.”

In agreement with Weber, senior Anastasia O’Brien was glad to be back in the stands playing for the band.

“I’ve missed [pep assemblies],” O’Brien said. “My favorite part was the ‘hey hey what do you say’ chant when the band got to participate.”

However, there are observable differences between previous assemblies and places to improve, according to O’Brien.

“It was definitely harder with most people not knowing how pep assemblies worked,” O’Brien said. “Also, in the past we have participated in the actual games of the activities such as musical chairs, and I think it’d be fun to do that again.”

There is definitely a lot to look forward to in regard to upcoming assemblies, according to Weber.

“Honestly, I feel like this pep assembly was one of the best ones we’ve had so far,” Weber said. “If students can keep that same level of energy and excitement for all assemblies, I think they’ll all be just as successful.”