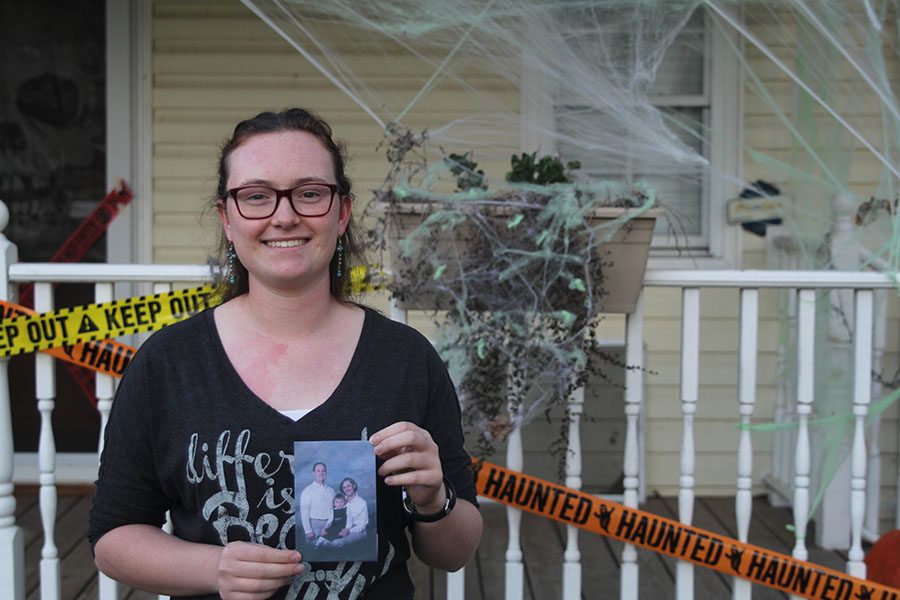 Standing outside her mom's house, sophomore Rachel Kurovski holds a picture of her, her mother, and her father on Monday, Oct. 24. "I try to be nice to people because I don’t want them [to] deal with what I do with my dad [when] he’s not nice to people," Kurovski said. "I don’t want other people [to] feel like that."

Despite dealing with an alcoholic father and divorced parents, Rachel has become a stronger person because of it

Through unfortunate circumstances, sophomore Rachel Kurovski has grown as a person and expanded her views by learning from the mistakes of her father, David Kurovski. Her father has been an alcoholic ever since she was in second grade, but the situation was less noticeable until her parents divorced in sixth grade.

During her fifth and sixth grade years when Rachel first noticed her father was drinking more regularly, she defended her dad in hopes of preserving their relationship. Her father has made it difficult to maintain a relationship, but Rachel still tried to understand his views and reasons.

“My dad doesn’t really ask what I want to do, he just makes us do what he wants to do. Whenever I have a problem, I try to talk it out with him, [but] then he just makes things worse,” Rachel said.

On Wednesdays and every other Sunday, Rachel goes to visit her father at his house with her sister and her mother. The visits usually last for about three hours on Wednesdays and six hours on Sundays.

Although difficult, Rachel’s relationships with her other family members have helped her through the situation as a whole. Her mother, Lori Kurovski, openly talks to Rachel about the incident to try to help her through it.

“I’m always willing to listen to what [my daughter’s] experience is without being judgemental,” Lori said. “I try not to speak negatively of their dad. I help [Rachel] to sometimes put things in perspective in a way to help her think about all aspects of the situation.”

I’ve [become] more confident with myself and what I believe and think.”

The divorce of her parents made Rachel realize that her father had been an alcoholic during her childhood.

“My parents didn’t get divorced until I was in sixth grade. It was actually [around] September, but we had been separated from him for [about] six months. Then he started drinking regularly about second grade which was a long time for him to be drinking,” Rachel said. “If I look back on it now in the videos he has of us when we were younger he seems as harsh as he is now. It’s just a difference of perspective on what he’s done in the past, and looking back on it now.”

Ultimately, the situation with her father has made Rachel more assertive.

“I’ve [become] more confident with myself and what I believe and think. It’s made me a stronger person by showing me that I shouldn’t [drink too much] when I’m older,” Rachel said. “I don’t want to have my friends or family or even kids have to deal with that sort of thing.”

Her mother has also seen the experience have a positive effect of her.

“Rachel’s realized what’s important in life for her in a positive way,” Lori said. “She’s been able to open up as an individual, truly be herself and [be] comfortable with who she is. I think [she] has realized views that are important for her in life based upon the experience she’s had with her dad.”

Lori is ultimately proud of her daughter for the way she has handled the situation.

“It’s sad to see your daughter to have to experience what she has experienced, but yet it’s also, as a mother, [good] to see the end result of how she’s grown through the situation,” Lori said. “It makes me proud of what Rachel’s done and how she’s handled it.”

If an issue with her father occurred, Rachel would talk to her friends about what happened.

“My best friend Molly [Contreras], who is in Colorado, completely understands the situation, and so do her parents [who] I’m also really good friends with,” Rachel said. “A lot of my friends that I’ve talked to about [the situation] understand it and I would talk to them about it if I had something come up.”