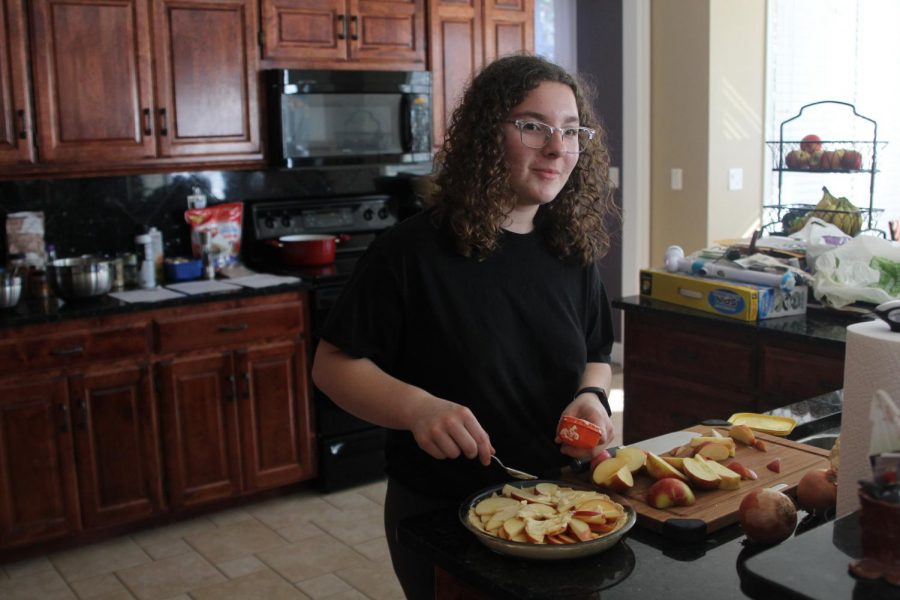 On Wednesday, Nov. 21, sophomore Gabi Hantla prepares a thanksgiving meal for herself that is completely vegan. Hantla says about being vegan “I think it’s just not only for the animals but also the environment. Veganism kind of helps all around everything and there’s really no real, good, valid reason to hurt animals and I feel like that’s a very important issue.”

Sometimes spending up to three hours on a single post from writing her captions to taking the photos, sophomore Gabi Hantla is dedicated to empowering others to live a healthy lifestyle through her Instagram platform. Gabi describes herself as a “vegan powerlifter, mental health advocate, animal and human rights advocate and intersectional feminist,” in her profile,  using her account as a platform to vocalize her views on these issues to over 1,300 followers.

A little under a year ago, Gabi began documenting her lifestyle in order to share her perspective.

For example, powerlifting is a way Gabi breaks stereotypes because being a female powerlifter is not common. She posts about powerlifting to inspire others to do the same.

“I think it’s important to share my workouts because a lot of girls don’t get into powerlifting because they think they’re gonna get bulky or look like a man,” Gabi said. “It’s really empowering to to powerlift, most women wouldn’t choose that path because it’s [seen as] more of a manly sport.”

“It’s like anything, we encourage both our kids, if they have an interest and want to go for it, we’ll support it. If they show no interest, we’re not gonna be supporting it,” Amy said.

While her physical health is a large part of Gabi’s focus, she also believes that it is also important to share about mental health, as she believes the two can go hand in hand. This is why she communicates about it often on her Instagram.

“I think that if you’re doing something for physical health that deteriorates your mental health, it’s probably not the best idea,” Gabi said. “It’s important to talk about mental health because a lot of people go through mental health issues without knowing what they are.”

After recovering from an eating disorder, Gabi decided to help others with her own experiences by being open about her recovery on social media for people to see and and feel less alienated.

“I’ve gone through a lot of that stuff that has impacted my life so much that I feel like it would probably impact other people’s lives as well,” Gabi said. “It’s easier to go through something if you know someone who has gone through it, [because] it makes it a little less scary.”

One person she has impacted with her platform is her best friend, sophomore Madison Larson.

“I think something that she’s helped me with the most is being confident,” Larson said. “We’ve helped each other with that but the most impactful thing for [me]her is confidence, self love and mental health. There are a ton of people who are inspired by her and support her.”

“There’s been so many issues with the teens and their mental health. I think we hush hush it too much and that’s a part of the problem,” Amy said. “When a kid has a mental issue, they feel like they can’t talk or they feel embarrassed or shunned for it …  and if they can see that other people are [going through the same thing] then it might hopefully give them the courage to realize that they’re not alone.”

Larson recognizes the impact Gabi is making on others.

“She’s definitely doing a good job. I think especially now [that] people use social media [often]. It’s very eye opening and she uses [social media] in a good way to help people,” Larson said. “If anyone ever needs something or needs to talk she’s always open to that.”

Gabi believes that being open about her life and beliefs can help others to be open with their issues.

“[Helping people] makes me feel really proud and… nice inside because it helps someone not have the bad experiences that I experienced,” Gabi said. “I stopped caring about what people thought and I just wanted to help other people, so I  put myself out there all the way.”