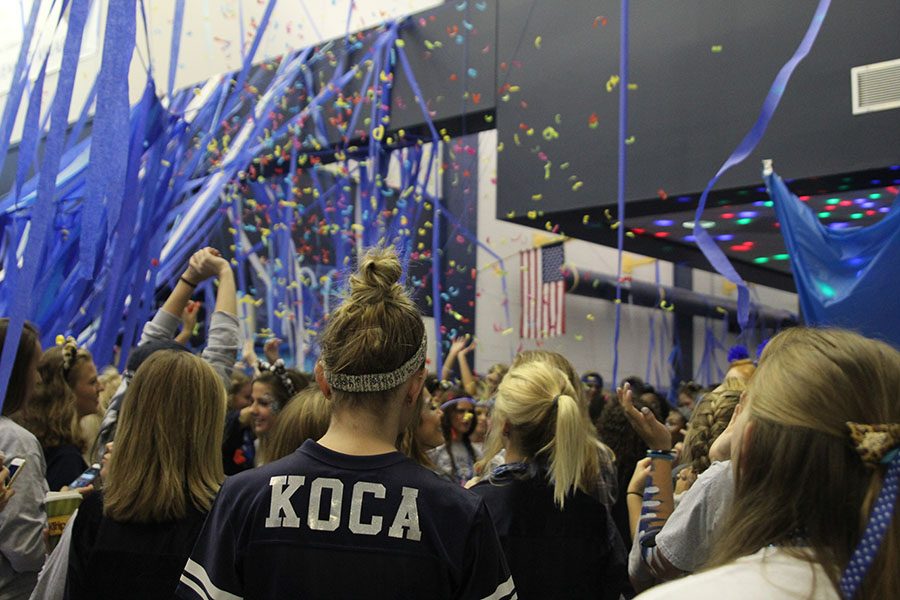 As senior Mallory Koca stands in the crowd, confetti erupts around her. 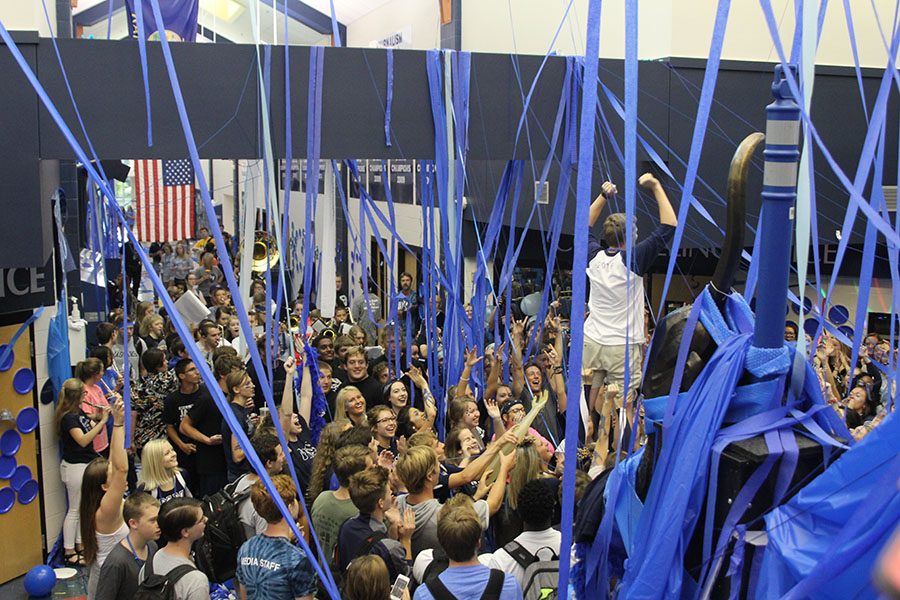 With the end of this year’s homecoming spirit week comes the age-old senior tradition unique to Mill Valley: the blue bomb. This year’s blue bomb occurred on Friday, Sept. 16, and the majority of the senior class came to decorate at about 5:15 a.m.

The blue bomb tradition began homecoming week of 2012, and has received more attention each year from each consecutive senior class.

“It’s one of the best days of the school year for all the seniors,” Rolig said. “I honestly think [we outdid last year’s class], it might start getting torn down in here, but it’s pretty lit right now.”

According to Rolig, seniors planned the decorations by creating a large group message with the entirety of the senior class.

“We made a giant group chat with all of us in it, and we just tried to communicate through that,” Rolig said. “Even though it was pretty hard, we just told people to show up and bring a lot of decorations.”

While the process of hanging up decorations is important, senior Morgan Thomas said her favorite part of the blue bomb was buying and collecting decorations.

“I like going out and buying the stuff and then everyone being here and hanging it up and making a mess of the school,” Thomas said.

Senior Kelsey Poje said that the blue bomb creates a cohesive environment for the senior class, and was excited about this year’s turnout.

“I like how it really brings the senior class together and everyone participates and comes together as a group,” Poje said. “No one is left out; everyone is just working toward the same goal.”

Communications teacher Kristen Crosbie has witnessed the blue bomb every year since 2012, and appreciates the effect it has on the student body as a whole.

“I think it’s important for the senior class to show the underclassmen that spirit and pride in the school is a great thing and it sets up the year,” Crosbie said.

The blue bomb also came as a surprise to incoming freshmen, including freshman Kylie Pitts.

“I was honestly kind of scared, but I thought it was cool and I’m excited to be a senior so I can do it,” Pitts said. “I just think it’d be fun to stay up all night and do it.”

Ultimately, Poje said she’s glad to have a senior tradition that so many people participate in, and thinks the blue bomb is extremely significant because of the impact it makes.

“Blue bomb is important because it’s the seniors’ last year,” Poje said. “We really just want to make an impression and show everyone this is ‘our school.’”