Less than five minutes away from Mill Valley, locally owned sports bar chain Nick and Jake’s opened their fourth restaurant on Midland Drive this past spring. Due to its relatively recent entrance into the western Shawnee area, we decided to go try a few crowd favorite dishes to see what all the hype is about.

From the outside, Nick and Jake’s appears to be a fairly sophisticated restaurant; with a nice outdoor patio, modern design and relatively expensive prices compared to the average bar, it leans on the higher end of the sports bar restaurant spectrum. After being greeted by the host, we were offered seats in either the bar or restaurant area, and we chose the restaurant side of the seating area. The inside is spacious with many tables filling the interior, and it has a patio for outdoor seating. Sitting at a booth positioned against the wall dividing the restaurant in half, we felt that the dim lighting and wall art gave the restaurant a comforting environment. 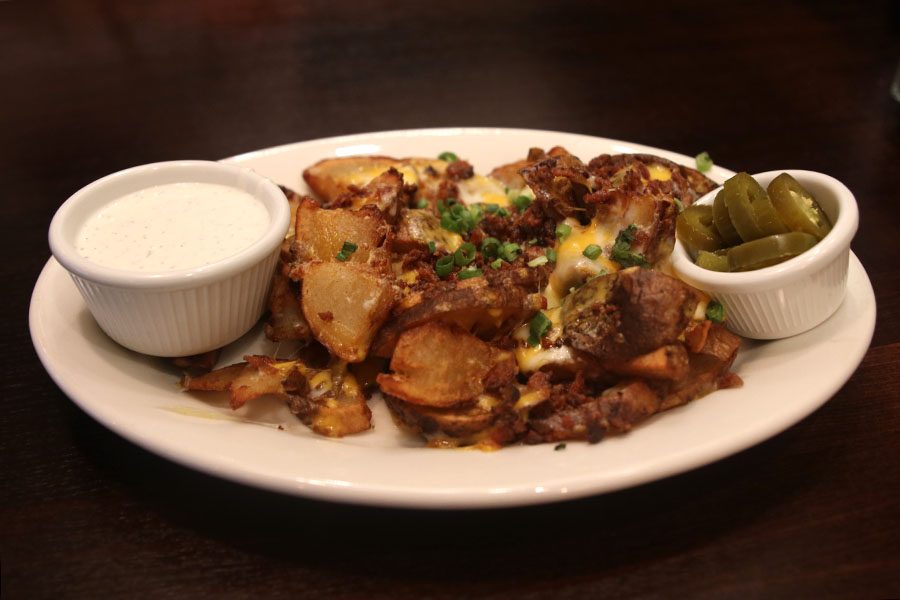 Among seven other selections of Jake’s Starters, the Irish Nachos — a crowd favorite — features crispy fried potatoes topped with melted cheese, bacon bits, diced green onions with a side of ranch and jalapeños.

Ordered off the “Jake’s Starters” appetizer menu – recommended by our waitress as a popular option – the Irish Nachos were a delicious way to kick off our dining experience. The plate held a generous pile of fried potatoes topped with jack and cheddar cheese, bacon bits and green onions. Served separate from the potatoes, there were two dishes for both pickled jalapeños and ranch dressing.

While we were pleased by both the appearance and taste of this appetizer, we certainly weren’t blown away. The potatoes were perfectly cooked with crispy skin and a soft, creamy center, but this is merely our baseline expectation for any restaurant that serves slightly overpriced bar food.

The dish’s most obvious fault was the proportion of potatoes to toppings; both were delicious, but the lack of cheese and bacon resulted in too many potatoes that had to be eaten plain. The side of ranch was its saving grace as it was a way to add flavor to the plain potato wedges. 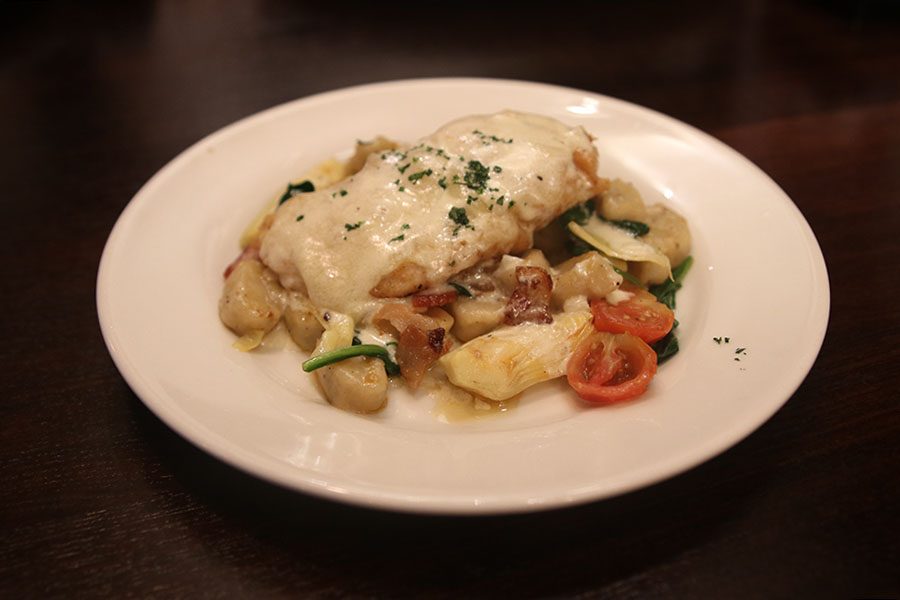 Among nine of the options in Nick’s Favorites, the Chardonnay Chicken — a popular entrée — is a decadent dish that serves a blend of gnocchi, artichokes, cherry tomatoes, bacon, cheese topped with a tender chicken. The Chardonnay cream sauce provides the dish with a unique flavor.

Wanting to review the very best Nick and Jake’s has to offer, we asked our waitress to recommend a best-selling entrée off the “Nick’s Favorites” menu, and the Chardonnay Chicken made the cut. However, after trying the dish ourselves, we have no idea how this dish became so popular.

At first glance, the entrée appeared to be fairly standard. Covered in chardonnay sauce, a good portion of chicken sat atop a bed of gnocchi, artichokes, blistered cherry tomatoes, spinach, bacon and jack cheese. The pop of color by the tomatoes and spinach were positive additions to the plate due to the actual entrée’s bland hue.

In terms of taste, this dish was severely lacking. While the tender, juicy meat was cooked perfectly, its flavor was nonexistent. The chardonnay sauce was also somewhat lacking in this area, but the generous amount of butter, cream and spinach in the mixture was just enough to bring flavor to the dish. However, after a few bites, we were already starting to grow tired of both the chicken and the sauce.

The secondary components of the dish were slightly more satisfactory; like the Irish Nachos, they reached the baseline satisfaction standard by being well cooked and containing sufficient flavor. If one enjoys gnocchi, artichokes and tomatoes dipped in average chardonnay sauce, then the dish isn’t a total let down.

All in all, the dish was good, but failed to meet our high expectations.