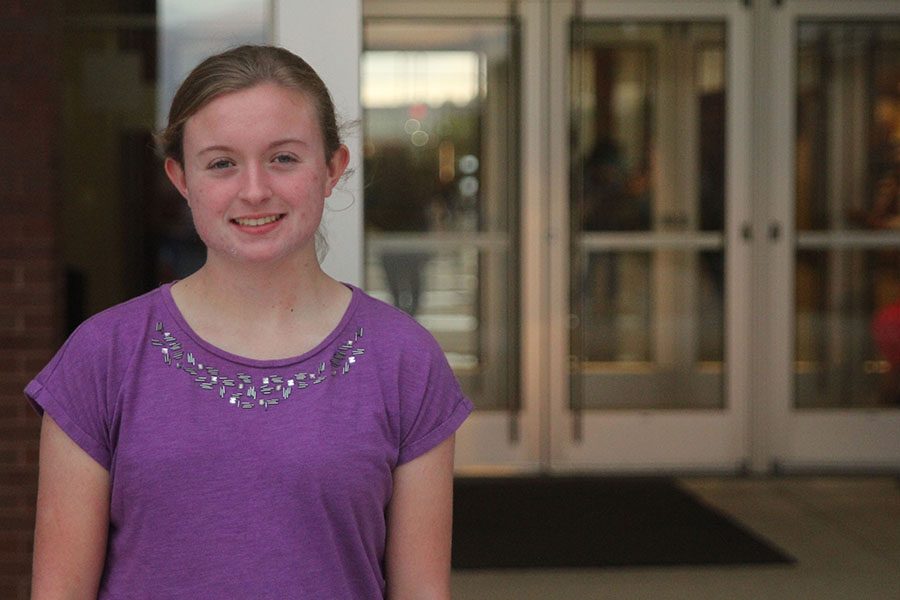 Sophomore Sydney Clarkin smile outside the doors of Westside Family Church on Wednesday, Oct. 12. “I didn’t really know much about God until going to church and reading my bible,” Clarkin said. “I know something that really pushed me into absolute faith is all the friends i’ve made and the leaders that I encountered they showed me the love of God.”

When sophomore Sydney Clarkin first walked into the Westside Family Church student ministry in August 2015, she never would have guessed that in a little over a year she would be up on stage speaking to the entire high school ministry about her spiritual journey.

Clarkin started attending Westside over a year ago with her mom because of how attainable the times were to her family’s schedule.

“I knew a couple of my friends that went to Westside, and they were one of the only churches in the area that had a 5 o’clock service which was really accessible to my mom and I,” Clarkin said.

Student ministry leader Alex Dalbey was impacted by Clarkin from their  first encounter.

“My first impression of her was [that she was] just really thoughtful and introspective because her questions [were] vast, theological questions,” Dalbey said.

Her journey and her bravery to talk about her religion openly impacts others around her, including Dalbey.

“[Clarkin] has shown me a bravery that I didn’t know existed in teenagers,” Dalbey said. “I think most people have this discomfort with not knowing things, myself included, but [Clarkin] somehow has a peace about not knowing things.”

Clarkin was baptized on Saturday, Dec. 6, 2015 to signify committing her life to faith.

“When I was baptized, that solidified my commitment to Jesus Christ,” said Clarkin. “It was definitely a good starting point for my new life and faith in him.”

Clarkin was brave enough to speak in front of her whole high school ministry on Saturday, Sept. 11.

“I was really nervous, but also very excited because it [was]  something that [Dalbey] had mentioned to me a long time ago, and [Dalbey] made it happen. It was kind of fulfilling a dream,” Clarkin said.

Dalbey is proud of Clakin and what she has accomplished throughout her first year at Westside. She hopes that Clarkin can have a positive influence on others just as much as she has influenced Dalbey.

Clarkin hopes to continue to grow and learn as a Christian.

“Getting to learn how to be a Christ follower has really affected how I see things,” Clarkin said. “Following Jesus’ example has pushed me to be more compassionate toward people. I [have] learned to love others better and be more accepting.”