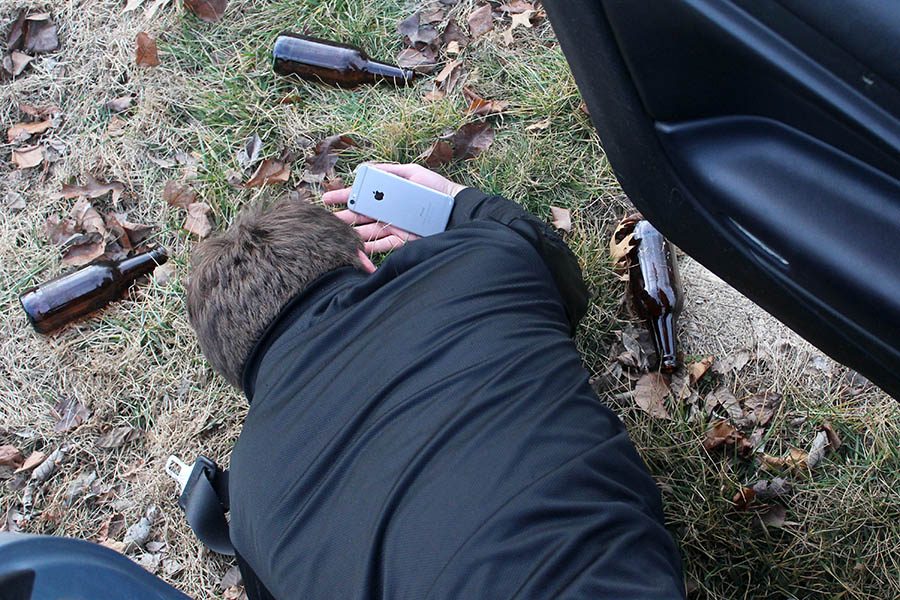 After several crashes this year, students reflect on safe driving

In this school year alone, two car crashes have happened involving De Soto school district students. According to the Centers for Disease Control and Prevention website, car crashes are the leading cause death for teenagers, making up one third of their deaths.

Distracted driving is defined by the U.S. government website for distracted driving as “any action that could divert a person’s attention away from the primary task of driving.” This includes using a cell phone, texting or talking to passengers. Additionally, 10 percent of all teenagers who were involved in fatal car crashes were considered “distracted” at the time.

Seven students from Mill Valley were involved in a car crash on Woodsonia Drive near 51st Street on Tuesday, Nov. 23. Everyone involved in the crash was hospitalized for injuries, and two of them were considered serious. According to one of the students involved in the accident who wishes to remain anonymous, the crash has changed his mindset when driving or being in a car.

“When someone is driving [unsafely] or trying to have fun, you know I get that, but I’m just more  focused on the road and stop messing around,” the anonymous source said.

Sophomore Taylor Stephens understands why it can be difficult to stay focused on the road while driving.

“When I’m driving, and I get a text or Snapchat, I look at my phone and if I’m at a stoplight, sometimes I pick it up and see who all has texted me … it distracts me,” Stephens said.

According to the DMV website, in Kansas it is illegal for drivers with a learners permit or intermediate license holders to be on their cellular device at any time when driving. This includes hand-held devices, texting and calling. As in most states, it is illegal for any driver, novice or not, to text while driving.

Stephens believes that today’s culture has contributed to her need to check her phone while driving.

“I think how society is now your phone is so important and it seems like if you don’t look at [your phone] you’ll miss something so I feel like I need to look at it to see what’s happening in my life,” Stephens said.

Concentrating on the road is a big factor of safe driving according to the anonymous source, and he believes there are certain things drivers should do to stay safe.

“Be careful, stay on the speed limit [and] don’t do anything dumb,” the anonymous source said.”The driver has to stay focused on the road, even if your friends are in there. I’m just glad we are all OK.” 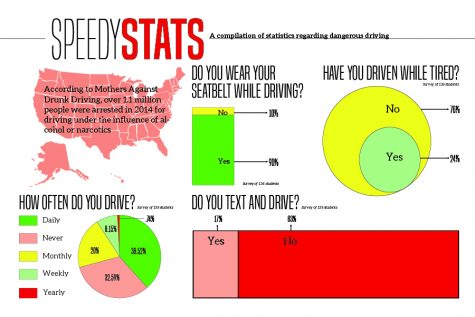 Franzwa worked at Life Time Fitness with a number of other students from both Mill Valley and De Soto, including senior Jasmine Cousins.

“[My friends and I] went and looked at his truck, and it was bad,” Cousins said. “It’s one of those things where you just have to be careful when you’re driving in that kind of weather; don’t speed, take it slow.”

Kansas state law enables police officers to pull over vehicles and ticket them if neither the driver nor the front seat passenger is wearing a seatbelt. Wearing a seatbelt is one of the most important things to do when driving, according to De Soto driving education teacher Bob Reeves.

“You must wear [seatbelts] all the time,” Reeves said. “The secondary restraint system does not work well if you do not have your seatbelt on.”

Senior Anna Clayborn, another student who worked with Franzwa, believes that driving recklessly can hurt the people around you both physically and emotionally.

“If it’s not someone they know or was close to, they don’t care and [the crash] doesn’t affect them,” Clayborn said. “Once it happens to one of their friends, it really does change their life; [they’re] like, ‘Wow, it might happen to me.’”

Cousins believes Franzwa could have survived if he had been wearing his seatbelt at the time of the crash, and says everybody should always wear their seatbelt.

If you lose one of your friends …[in a car accident], you’ll never forgive yourself.”

“[Not wearing a seatbelt is] definitely not worth losing your life over,” Cousins said. “It’s just something so small that there aren’t really any problems by wearing your seatbelt.”

Franzwa’s accident should serve as a message to other teenagers who don’t always take necessary safety precautions like wearing a seatbelt when driving, according to Clayborn.

“Even if they don’t think it can happen to them, it can,” Clayborn said. “At any moment something could happen, and [you must] wear your seatbelt and be careful. If you lose one of your friends or yourself, you’ll never forgive yourself for not doing that.”

Driving Under the Influence:

Driving under the influence, or drunk driving, refers to operating a motor vehicle while one’s blood alcohol content is above the legal limit set by the state statute, according to the Merriam-Webster dictionary. In Kansas, the state law for legal breath alcohol content is .08 percent.

School resource officer Mo Loridon believes teenagers who drink and drive are at a greater danger to others on the roadway.

“As a teenager, they’re not an experienced driver, so they are not that great of a driver in the first place,” Loridon said. “You’re putting yourself at harm and then you’re putting other people at harm by being on the roadway.”

Designated driving, when one person does not drink to get the rest of the group home safely, is something junior Whitney Burke has experience with, seeing as she has done it for some of her friends.

“It is definitely the much safer option,” Burke said, “It ensures that they will most likely be safer when you’re sober and in control of where you are going and how fast you are going. You are mentally [aware] so you can make sure everyone will be safe.”

Burke also believes drunk driving affects teenagers specifically because of a “motivation to be reckless and do what their friends do,” and believes teens would rather risk driving under the influence than face the disappointment from their parents.

There is no exception for drinking and driving, and those caught will be held before the law, according to Loridon.

“The message is, you’re not old enough to do it, and you should not do it,” Loridon said. “I mean this isn’t even a case of ‘oh I just had a beer at my buddy’s house that doesn’t even count’. It is illegal for you to even be drinking in the first place.”

The consequences of driving under the influence are why Burke she chooses to not drink and drive.

“I just could never live with myself if I ruined someone else’s life or my own because of one dumb decision I decided to make,” Burke said.