Prices of EpiPens higher than ever before

The EpiPen sold for $100 in 2008, but in the past eight years the price has increased by more than 500 percent according to CNBC. This extreme rise in price has many people concerned. It has also yielded much criticism from politicians such as Sen. Amy Klobuchar, who has even gone as far as to call it “unjustified,” according to CNN.

The price of a two pack of EpiPens is now over $600 according to New York Times. In Canada, the price has remained about $100, even though they are distributed by the same company- Mylan.

This is a major problem for the nearly 43 million people who need an EpiPen to counter a life-threatening allergic reaction. Many people are unable to come up with $609 for an EpiPen pack that expires every 12 months, which is why a lot of people are now deciding to go without them.

Those who have an allergy with the possibility of producing a severe, life-threatenening reaction are recommended to carry an EpiPen with them at all times.  These allergies may include food, latex and insect stings and bites.  However, with prices being so high, this is no longer possible for everyone.

Social studies teacher Chris Dunback deals with numerous EpiPen owning students on the track team.  He is aware of the cost increase but does not understand why Mylan has raised the price to $609.

“I don’t know if [the cost increase] is about trying to make excessive amounts or if the company is just trying to break even,” Dunback said.

Mylan has not yet provided a reason as to why the prices have risen so much, but they have offered a $300 coupon to reduce the cost by 50 percent.  Mylan has a patent on the EpiPen and has no direct competition.  Without there being any alternative way of getting an EpiPen, Mylan is free to increase the price however they choose with criticism as the only consequence.

According to school nurse Heather Van Dyke, who is responsible for handling multiple students’ EpiPens, the price spike will be problematic because EpiPen purchasers and carriers will not deem the investment of an EpiPen necessary.

“If [they are] good at avoiding the food or the latex, to them, it’s not worth the cost,” Van Dyke said.

Junior Luke Guilford has a nut allergy and carries an EpiPen in both his backpack and his car. Guilford has had to dispense his EpiPen three times before due to exposure to nuts.

“The most recent time was the last SuperBowl,” Guilford said.  “I ate an M&M cookie and it had peanuts in it.”

If his EpiPen were not available, he would have suffered from a very severe reaction because of his allergy.  According to Guilford, the price increase doesn’t affect him personally, but it does affect his parents. The only repercussion of the cost increase for him is the frequent complaints from his mom, who pays for the EpiPen.

At Mill Valley, there are 72 students, including Guilford, with allergies that require an EpiPen in the case of a reaction, according to district health coordinator Tara Harmon-Moore.  However, there are only 10 being held in the nurse’s office, two of them belonging to the school.

“Say you got stung by a bee and you didn’t know you were allergic to bees, because it’s the first time,” Van Dyke said. “Then, we’d have [an EpiPen] for you, because you didn’t have it.”

Although the price is high, Mill Valley maintains the yearly cost to have the two EpiPens available. If the cost increases at the same rate, Harmon-Moore will have to reconsider the medical spending to adapt to the economical situation. 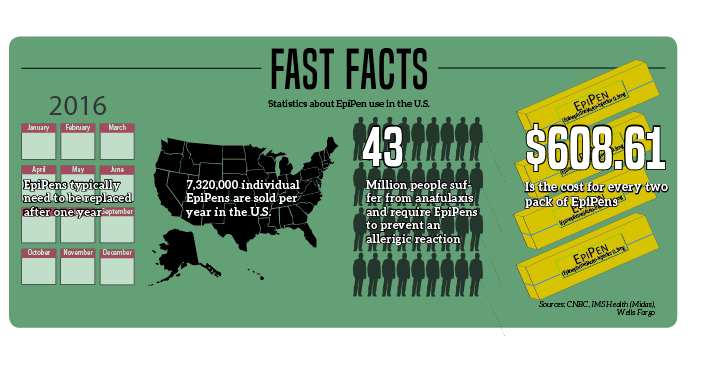