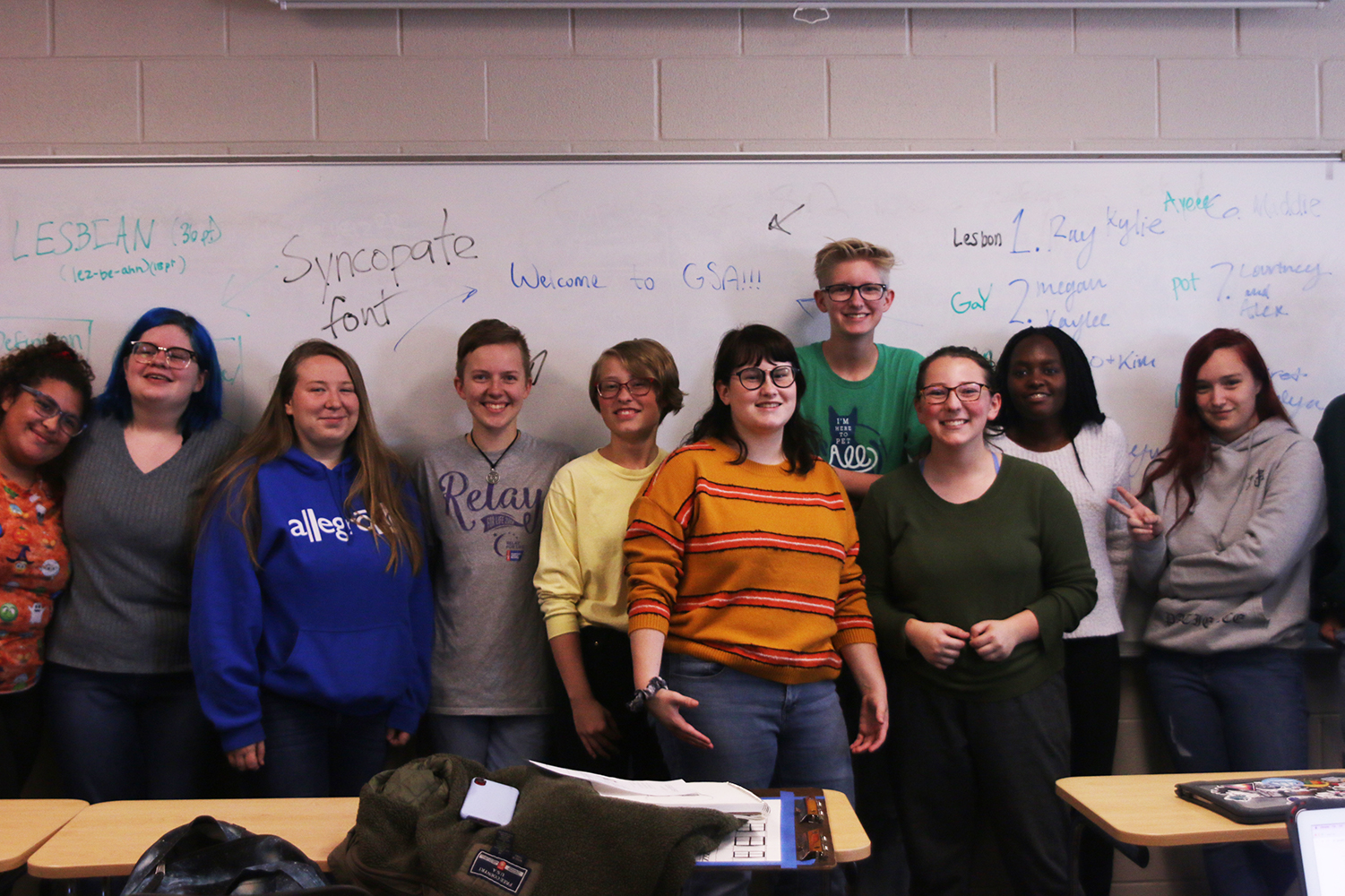 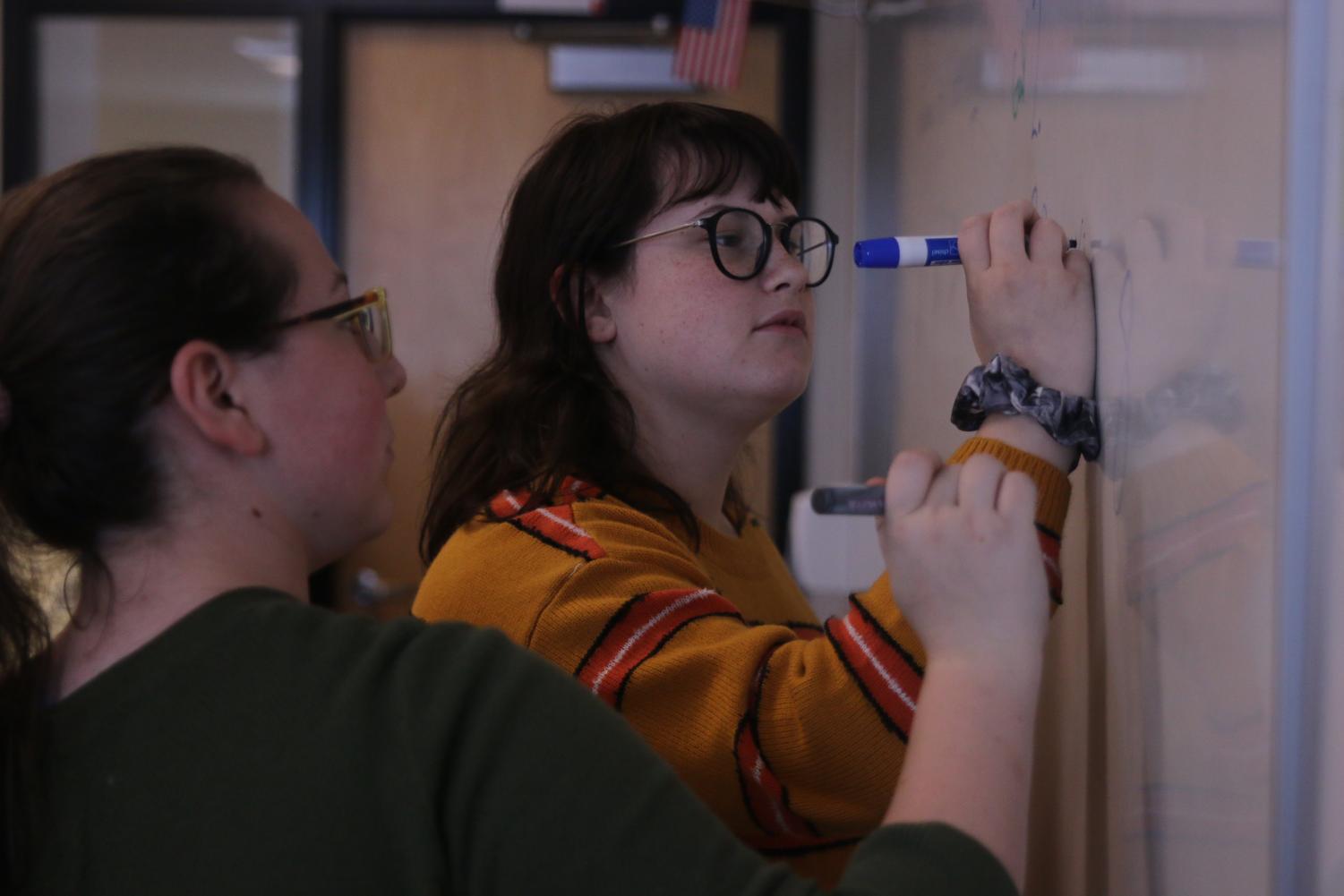 Writing on the whiteboard, junior Madelyn Augustine and senior Madelynn Hodes draw the agenda for the GSA meeting on Tuesday, Oct. 9.

At Mill Valley, students are inclusive, but there’s still a long way to go

A classroom right before passing period can reveal a lot about the treatment of LGBTQ students at the school. Pro-LGBTQ stickers cover the laptops and water bottles of some students, while simultaneously other students jokingly use anti-gay slurs to mock each other.

This scene is a microcosm of the treatment of LGBTQ people at Mill Valley. Some corners of the school are teeming with acceptance and kindness towards every student regardless of their identity, while others feature derogatory language and disdain for students whose identity does not match their own.

Transgender senior Park Zebley thinks a majority of the student population fits into the kind and accepting category.

“Generally, the student population was pretty good with it,” Zebley said. “It was really just dealing with adults which was difficult, which was surprising to me.”

He believes that the reason some adults are less accepting than the student body is because of tradition and lack of knowledge.

“[Adults are] used to how things are, and a lot of adults and administrative positions aren’t really trained on how to make everybody as comfortable as possible,” Zebley said.

Some adults are working to break their stereotype of intolerance. Health teacher Amy McClure makes it a point of emphasis in her classroom that LGBTQ students are accepted and derogatory slurs are not.

“I don’t tolerate [slurs],” McClure said. “I always tell kids, if you’re referring to a math test, your math test is not gay. Your math test doesn’t have sexual orientation. Don’t use that term in a negative way.”

Bisexual junior Madelyn Augustine has a more cynical view of students. She believes that if students felt comfortable harassing her, they would; however, they’re afraid to make derogatory remarks at school.

“I don’t think people have the courage or the guts or even the second thought to say anything mean to me,” Augustine said.

The district attempted to institutionalize an atmosphere of tolerance by adding sexual orientation to the district’s non-discrimination policy last spring. While superintendent Frank Harwood is glad the policy was passed, he’s also thankful that it hasn’t been needed thus far.

“In day to day things, [the non-discrimination policy] doesn’t make any difference. What it does is make our policy more inclusive,” Harwood said. “We want to make sure that [LGBTQ students] feel like [they’re] included.”

I’m just left with [one bathroom] during the day, which can be frustrating if I need to get to classes and get things from my locker as well.”

However, there are still a few areas where LGBTQ students aren’t equal. One of the most visible is bathroom use. According to Harwood, transgender students are not forced to use a bathroom that doesn’t match their gender identity, but they are also not allowed to use bathrooms corresponding with their chosen gender. 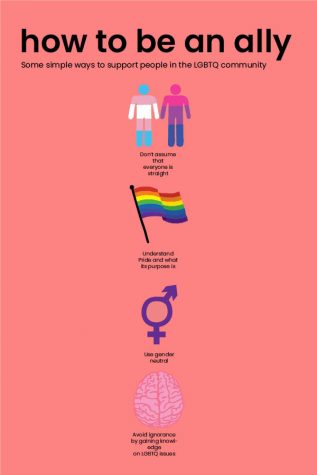 Due to this rule, only the four unisex bathrooms in the school are available to transgender students. One, located by the art room, is only accessible with a key that must be obtained from an art teacher. Two, located in the nurse’s office and the main office, require permission from either the nurse or office staff to use. Zebley is primarily limited to only one bathroom, located in the library.

“I’m just left with [one bathroom] during the day, which can be frustrating if I need to get to classes and get things from my locker as well,” Zebley said.

Zebley thinks that while there is still progress to be made, the school is very tolerant compared to other places in society.

“We’re pretty lucky here. Obviously, there’s still some people that are just ignorant or trying to get a reaction. But in the circles I’m in it’s all really, really good. Most people don’t even really care.” 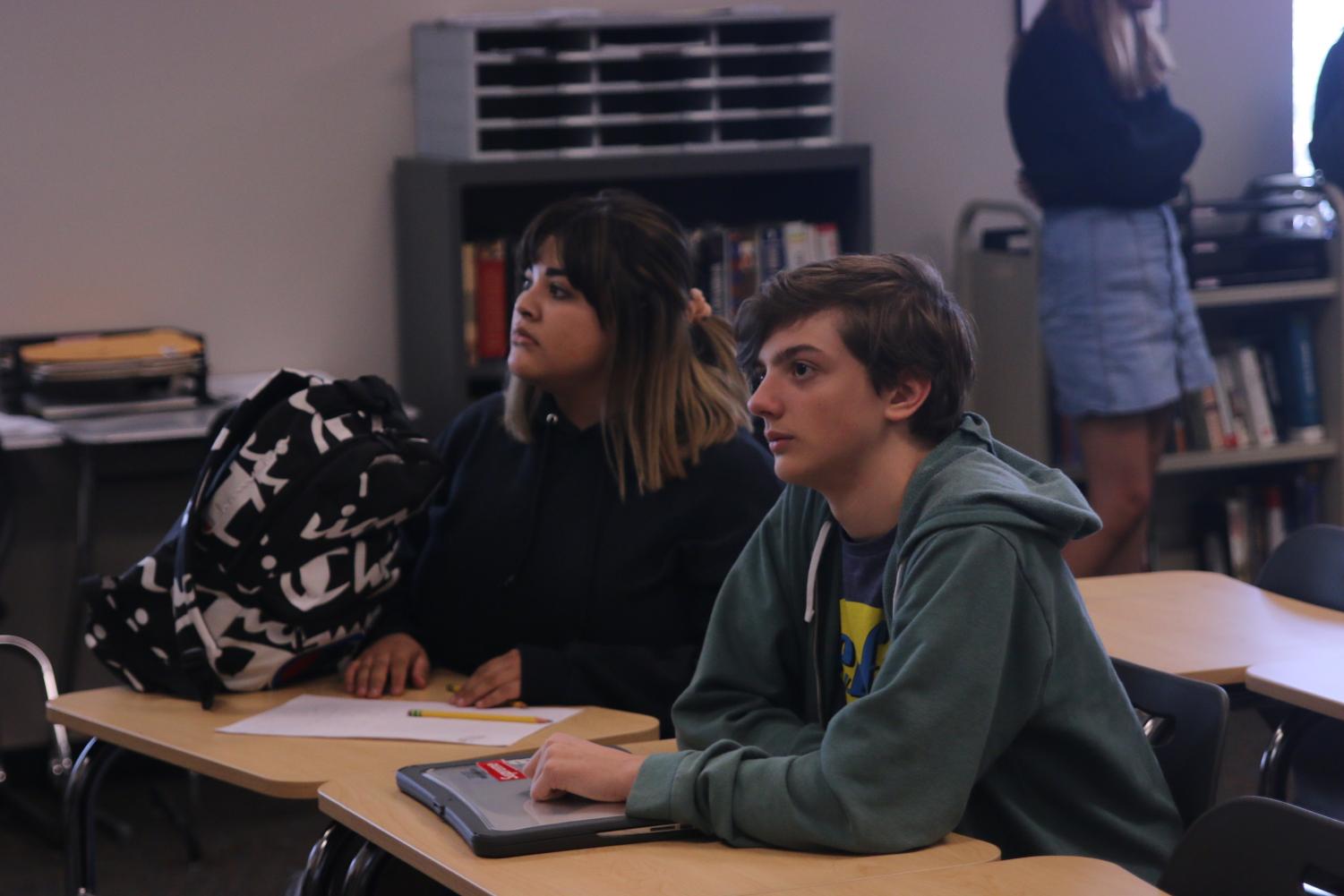 During the GSA meeting on Tuesday, Oct. 9, freshmen Kimberly Ornelas Garcia and Noah Basso use laptops to plan ideas for posters.

In Shawnee, the community strives to improve

“Every time I walk into church, I feel like there is this huge target painted on my back. All it takes is one wrong word,” Augustine said. “I don’t know what they could do to me. But it’s going to be bad.”

Outside of a few select intolerant places, though, Augustine still believes that the larger community appears tolerant of her — however, she’s not sure how real the apparent tolerance is.

“I feel like we do have a pretty tolerant community. But the people who are upset about [my sexuality] will not say it to my face, or they assume that I am part of the straight community and they will just mention it under their breath,” Augustine said.

McClure echoes Augustine’s sentiment; she agrees that while on the surface Shawnee appears accepting, there is still a less tolerant population where progress needs to be made.

That population revealed itself at a Shawnee city council meeting where a city ordinance to add LGBTQ people to the city’s nondiscrimination policy was discussed. The ordinance passed in a 5-2 vote; however, it passed only after four hours of deliberation that featured criticism of the ordinance from several members of the community.

At the meeting, councilman Eric Jenkins, who voted against the ordinance, claimed that there was “no evidence presented that there have been instances of sexual orientation or gender discrimination in [the Shawnee] community.”

Council president Stephanie Meyer, who voted in favor of the ordinance, disagrees with Jenkins’ assessment, citing the four hours of public discussion as an example of where progress is needed.

“I believe Shawnee is a welcoming place,” Meyer said. “That being said… it was clear from some of the public conversations that we still have some work to do in better understanding both the struggles these individuals still face.”

Augustine is afraid of this intolerance in her personal life, and she notices the same concerns Meyer has about the adults in the community.

“I can’t handle the fact that adults that I am close to and I have known since I was young could one day be weird around me because of [my sexuality],” Augustine said. “I just I don’t know if the adults in this community are as welcoming.”

McClure agrees with this assessment: while the community is generally accepting, there are areas with a lot of work left to be done.

“I do know that there is still discrimination going on. We’re not perfect,” McClure said. “But I think [our area is] better than some other areas in the state of Kansas.” 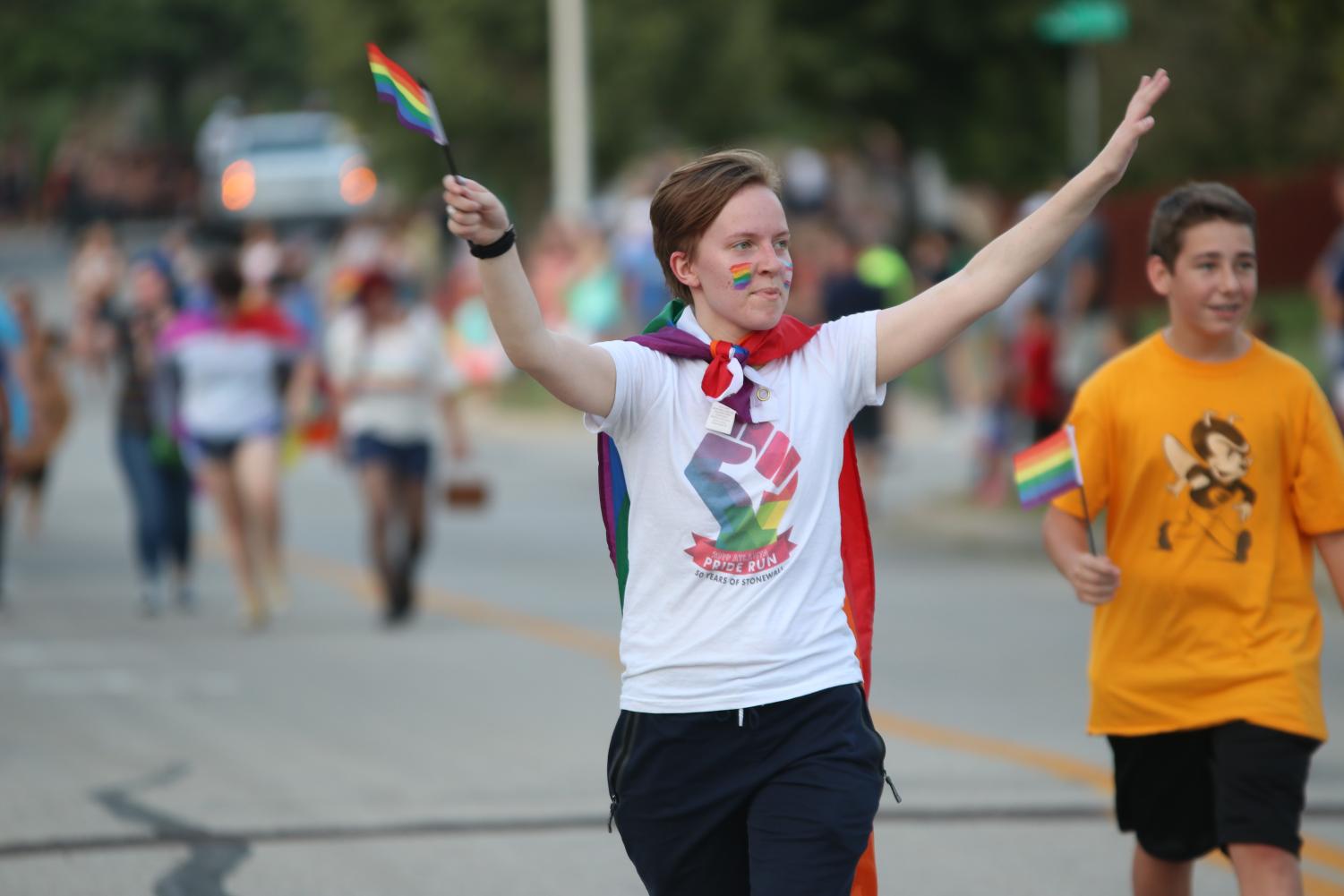 Ahead of the GSA float in the Homecoming parade, senior Jay Zuch waves a rainbow flag.

Across America, LGBTQ rights are in peril

While it appears that LGBTQ people are making progress towards acceptance at school and in Shawnee, this progress has not been matched by the rest of America; instead, some LGBTQ people like Augustine believe that their rights “have never been closer to being ripped away.”

Evidence of this rise in hatred for LGBTQ people can be seen in rising hate crime rates: in 2017, the hate crime rate increased by 17%, and 1,130 hate crimes were committed due to the victim’s sexuality or gender identity. The largest attack against the LGBTQ community in American history, a shooting at the primarily gay Pulse nightclub in Orlando which left 49 people dead, also took place in 2016.

Augustine attributes this spike in hate crimes to the attitudes of the executive branch.

“Since Trump has been elected, there’s been an insurgence of hate crimes in almost every minority group,” Augustine said. “It’s because he and his openly transphobic and homophobic vice president have been elected to office.

Legal challenges to LGBTQ people have also been on the rise. Although gay marriage was legalized by the Supreme Court in 2015, recent Supreme Court cases have called into question whether LGBTQ people can be fired for their identity. These legal challenges and hate crimes represent what some members of the LGBTQ community perceive as a dangerous regression in attitudes across America.

Since Trump has been elected, there’s been an insurgence of hate crimes in almost every minority group. It’s because he and his openly transphobic and homophobic vice president have been elected to office.”

According to Zebley, a large part of this spike in hatred is due to depictions of LGBTQ people in the media and on social media. He thinks the stereotypes are ignorant and misrepresent LGBTQ people, painting them in too negative of a light.

Augustine singles out social media as a cause for this recent movement. 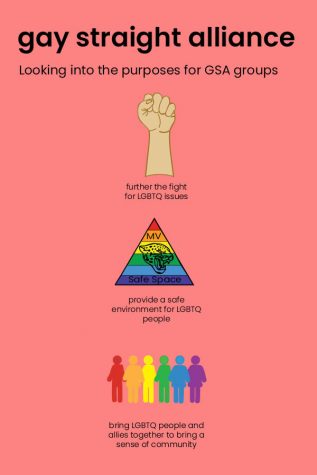 “Because of social media… kids who have been raised by parents who [are homophobic] can talk about it publicly for everyone on the Internet to see,” Augustine said.

Zebley thinks that ignoring these stereotypes and allowing LGBTQ people to speak and be understood is one of the best ways that non-LGBTQ people can fight this prevalent hatred.

“I think [people] can be better by being willing to listen. A lot of what you see in the media isn’t really true about us, like how we get offended over everything,” Zebley said. “A lot of us are just willing to listen to you, as long as you listen to us.”