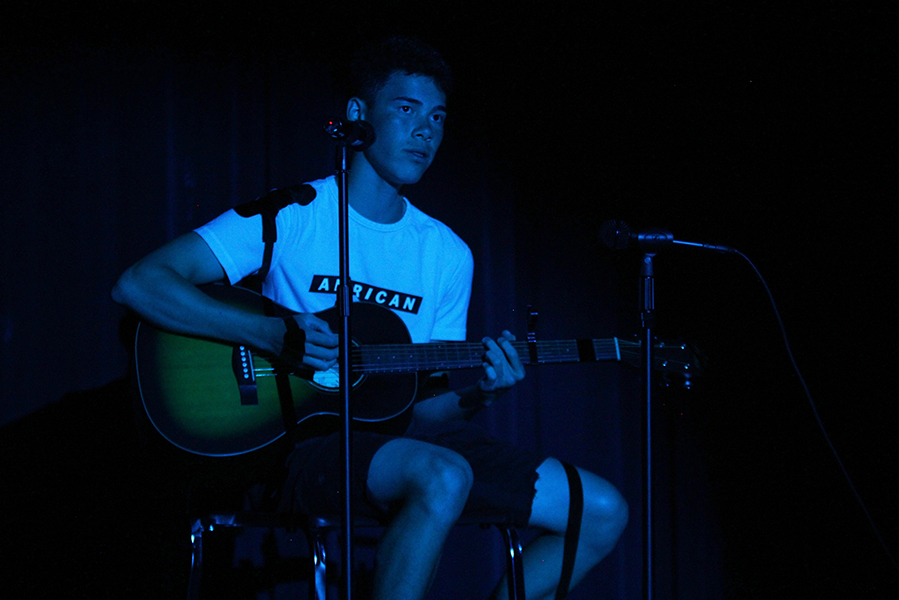 Singing the song “When You Love Someone”, senior Eric Shanker performs a guitar and vocal solo at the talent show on Thursday, May 2.

Gallery|10 Photos
By Tatum Elliott
Singing the song “When You Love Someone”, senior Eric Shanker performs a guitar and vocal solo at the talent show on Thursday, May 2.

Acts at the talent show ranged from stand up comedy to covers of “Thunderstruck” by ACDC.

Paden, who sang “I Say A Little Prayer” by Aretha Franklin, was very pleased with how her performance went and how it was received.

“I thought I did pretty well; my nerves were surprisingly calm. I was just pretty chill about the situation,” Paden said, “I thought the crowd was very receptive to it. I tried to incorporate the crowd a lot.”

When it comes to her placement, Paden is more than happy.

“I feel great. You know, it could have been anybody else, but it was me, and I’m very grateful for that.” Paden said, “Everyone was so talented, and at the end of the day, we’re all winners.”

Junior Eva Burke, who performed “Toccata” by Vandal on the piano, tried something new this show.

“I played a more difficult piece, because last year I played a song that I had learned several years before that, and this one was new,” Burke said, “It was more spur of the moment, so I think there was more emotion and the piece, or more energy.”

Looking to the future, though Burke is unsure whether she will compete again, she wants a piece that will be more familiar with the crowd.

“I’d want to try and sit up a bit and find a song that appeals more towards the audience, because I’ve only done songs that I’d play for a festival,” Burke said, “They’re just piano songs, [I want] something people know.”

“I would, but according to the rules, I don’t think I can,” Paden said, “because I won I can’t do it next year, so there’s that.”