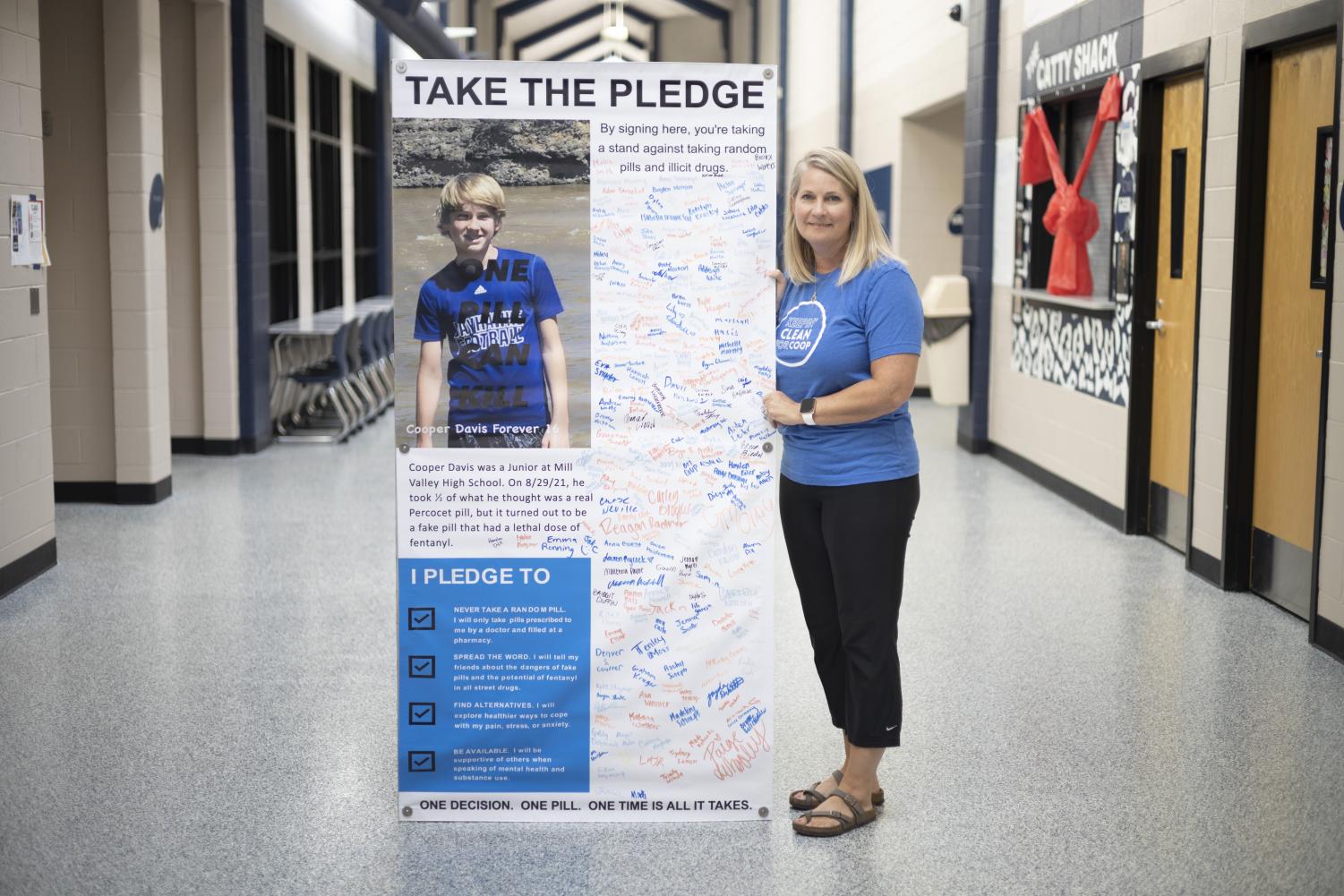 Holding the drug awareness pledge signed by Mill Valley students on Monday, Sept. 12, Libby Davis has spread awareness to the dangers of illicit drugs. Libby says “[the DEA’s] campaign is called “One Pill Can Kill.” We just kind of grabbed on to that statement and we created “Keeping Clean For Coop”. (By Elizabeth Summa)

Holding the drug awareness pledge signed by Mill Valley students on Monday, Sept. 12, Libby Davis has spread awareness to the dangers of illicit drugs. Libby says “[the DEA’s] campaign is called “One Pill Can Kill.” We just kind of grabbed on to that statement and we created “Keeping Clean For Coop”.

In remembrance of the late student Cooper Davis, his mother, Libby Davis, continues to lead efforts around the country in order to spread the word about Fentanyl and adolescent drug use. On Aug. 29th, 2021, Cooper passed away after consuming what he believed to be a half of a Percocet pill, which was actually a fake pill laced with Fentanyl.

In response to Cooper’s passing, Libby, students and others with a connection to Cooper’s story have turned their grief toward a solution, a campaign that strives to reach teens all over the Midwest to educate them on the dangers of illicit drugs, especially
Fentanyl. The campaign that started as a simple bumper sticker has grown into a non-profit organization working towards improved legislation and protection of adolescents regarding drug usage and sales.

Whether Cooper’s story is represented by a blue “Keepin’ Clean for Coop” t-shirt worn by students, teachers or parents around school or the dozens of Sharpie-written signatures covering a pledge against using drugs, sitting outside of the counseling office, Libby’s work over the last year has served to ensure that her son’s memory can prevent future deaths.

Less than a month after Cooper’s passing, the DEA’s widespread “One Pill Can Kill” statement captured the attention of the Davis family, sparking a desire to make something good out of Cooper’s death and help spread awareness to other families about the
dangers of Fentanyl.

The Davis’ mission to spread awareness over their son’s death started as a simple round blue bumper sticker that read “Keepin’ Clean for Coop”. This sticker was originally designed in the hopes that its message would circulate throughout the community.

“We want Cooper’s death not to be in vain,” Libby said. “Something good has to come out of this tragedy. We can’t count that [our campaign] has saved any lives. We believe that more people know about Fentanyl and the dangers of Fentanyl today than they did a year ago, so that just keeps us moving forward. We just want [Cooper’s] story to be a cautionary tale.”

Cooper’s memory grew into a non-profit organization focused on spreading awareness through several social media pages, informational school assemblies and a digital billboard hanging over I-70. Although the organization has a new name, The Cooper Davis Memorial Foundation, it still uses its original slogan to spread awareness.

Since the initial send out of the DEA’s “one pill can kill” message, the Davis family has held on to that statement in every effort they’ve taken to spread Cooper’s story in hopes that it reaches teens at risk and in need.

“We recently just got a non-profit designation,” Libby said. “So we do officially have a nonprofit organization. It’s called the Cooper Davis Memorial Foundation. But our logo that we’re using is that original bumper sticker called ‘Keepin’ Clean for Coop.’”

Senior Lauren Aycock, who was a close friend of Cooper’s, believes that the Cooper Davis Memorial Foundation has been a successful campaign so far.

“I think [Cooper’s] family has done a great job, they do so much,” Aycock said. “They’re so involved with the school. His parents are such sweet people. I know getting the awareness out really helps them and it’s helped a lot of people. I think they’re doing a great job with all of the things they’re doing just to spread awareness … Even though it’s really sad, I think it has been a great thing for people who are struggling and people who didn’t know the impact of dealing with drugs. It’s been a great learning experience for everyone.”

Traveling from school to school across the Kansas City metro, providing education on the dangers of Fentanyl, Libby has also worked with several politicians to further her cause, including senator Dr. Roger Marshall. Marshall contacted Libby regarding a bill that would require social media companies to report illegal drug deals on their platforms to the Department of Justice, and requested to name the bill after Cooper. On Sunday, Sept. 18, the Cooper Davis Act was introduced in the Senate.

In an interview with KSHB, Marshall hopes that the bill, if it were to become a law, would need no enforcement on account of the mainstream social media platforms taking initiative to report online drug deals.

Social media companies would also be required to save information that would later be used as evidence in investigations. While social media accountability was not an original item Libby planned to cover, she believes it’s the only platform in the hands of lawmakers that can be controlled to mitigate the digital sale of Fentanyl.

“Senator Marshall recognizes [Cooper’s death] as a poisoning, not an overdose, and has really gone to bat in Washington to try to raise awareness and get the current administration to do more to stop the flow of Fentanyl coming into our country,” Libby said. “That is a hard task. The DEA is trying all they can but you know they’re seizing about 20% [of the Fentanyl] coming into our country. That means 80% is still making it in and the 2021 statistic was that the amount they seized last year was enough to kill every American.”

Libby first met with the senator’s team in May. Because she believes social media is not doing enough currently to hold online drug dealers accountable, Libby hopes the bill will get enough support to become a law. “The Cooper Davis act raises the level of accountability where the social media accounts are supposed to report any drug activity that they see occurring,” Libby said. “It makes them accountable. It’s the Attorney General of the United States that they have to answer to so audits can be performed. The government can look at their algorithms and decide if they’re doing enough to kind of catch those criminal activities. It’s just a higher level of accountability for the social media apps.”

For Libby, having her son’s name on federal legislation honors him and helps her know something good can come out of tragedy.

“When I met in May with Senator Marshall’s group, he scheduled a follow up meeting with a couple of his people and they, on the phone, announced to me that they were going to be introducing this bill, and they asked permission to put [Cooper’s] name on it. And of course, I said yes,”Libby said. “I think it was already in the works. It wasn’t something that I requested. It was their own idea. When they took it upon themselves to create a bill and asked his name to be put on it, I thought it would save lives.”

In an interview with Fox Business, Marshall’s creation and introduction of the Cooper Davis Act was primarily motivated by the record number of Fentanyl-related deaths over the last year and steps that could be taken to mitigate the Fentanyl crisis.

Cooper and his friends purchased the fake Percocet pills from a drug dealer they connected with through Snapchat. Cooper’s story and many others like his where teens have gotten access to drugs over social media have driven Libby, along with lawmakers behind the Cooper Davis Act to crack down harder on social media platforms for allowing this kind of behavior.

“Social media apps should not be okay with their platform being a vehicle for drug distribution,” Libby said. “Gone are the days of drug deals happening in dark alleys. Being able to purchase a drug that could potentially kill your child is just a few clicks away.”

Cooper’s death has had an undeniable impact on the local community, which the Cooper Davis Memorial Foundation hopes to use to continue spreading awareness and keep Cooper’s memory alive.

On Saturday, June 18th, the foundation held the Fighting Fentanyl 5K at Mill Valley. The event raised over $23,000 going toward spreading Fentanyl awareness.

“To us [the Fighting Fentanyl 5K was] an awareness event disguised as a 5K,” Libby said. “The 5K got the people there and gave us the platform to tell Cooper’s story once again.”

Among the community members who participated in the event was junior Audrey Holick, who ran the race with her mom and sister.

“I think [the 5K] was really well done,” Holick said. “I really think they were able to take something so horrible and make it into something almost positive, something that could change the community. Instead of just focusing on the death, they thought of what they could do with it, and I really like that. I think they did a really good job with it.”

Like Holick, junior AJ Vega also ran in the 5K and has been impressed with the Davis’ family advocacy.

“I think they’ve done a very good job to help [inform people about] how big of an issue this is,” Vega said. “We got a poster of Cooper Davis at the school’s center and people are signing that, which is really cool. I think they’ve done a good job and the 5K was a good, good fundraiser because it’s your to do the exercise and then at the same time you’re fundraising for something that’s a very big issue. [I give] credit to them, they’ve done a lot to help spread awareness.”

Aycock hopes that people will continue to learn from Cooper’s story.

“[Cooper’s death] impacted every person in different ways, no matter how you knew Cooper” Aycock said. “He was one of my best friends forever, we were always together. Some of the people who were around him when he was doing those things, I hope that they learned from him. I just hope everybody takes it however they need to.”

Although Libby recognizes that there are still plenty of steps to take to prevent future deaths, she emphasizes the importance of informing people of the dangers of drug usage.

“There is still a lot of work that needs to be done,” Libby said. “And the only defense we really have is awareness.”