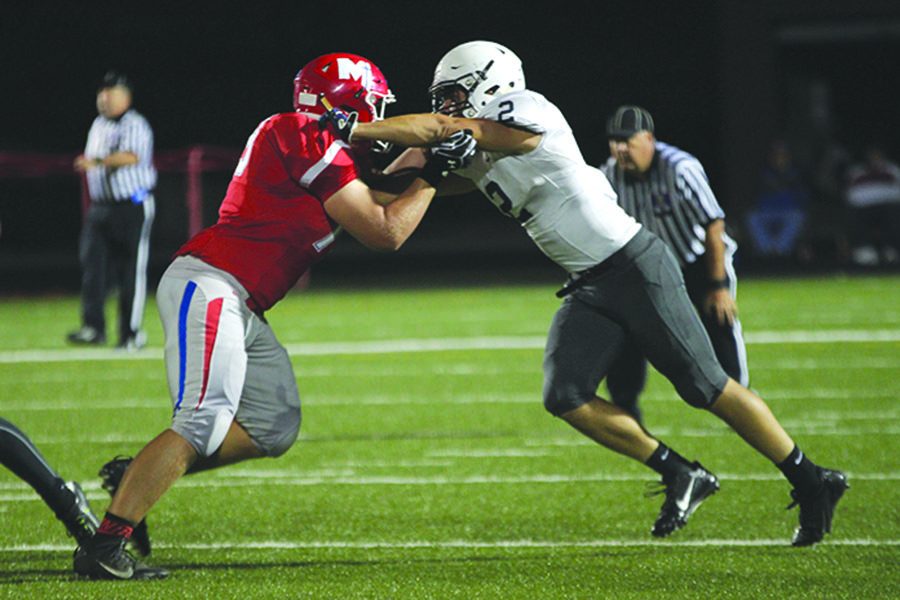 With his hands on his opponent’s shoulders, junior Ike Valencia pushes the Bishop Miege player back on Friday, Oct. 7. The Jaguars fell to Bishop Miege 64-21.

With these potential changes, Hines believes a new classification system could create a more even playing field for both public and private schools, particularly in the playoffs.

“[The potential changes] would create much more competitive postseason tournaments,” Hines said via email. “Moving really successful private schools up a division would create more parity in all levels of play and allow a truly competitive postseason tournament to develop.  We’ve all seen enough of schools like Bishop Miege winning by huge margins in every round of the post season in nearly every sport.”

We’ve all seen enough of schools like Bishop Miege winning by huge margins in every round of the post season in nearly every sport.”

Hines suggests one of two options of his own, regarding private schools’ classifications in particular: a success modifier allowing schools that finish in the top four in three or four consecutive seasons to move up a classification or a multiplier rule where private schools’ attendance would be multiplied by a fixed number to increase enrollment numbers.

While Hines is seeking to even the playing field with private schools, Bishop Miege athletic director Mike Hubka — who also served on the KSHSAA classification study committee the past two years — believes that the current state of athletics doesn’t entirely fall on private schools.

“Several schools have rich traditions that have produced great amounts of success that include state championships, both public and private,” Hubka said via email. “Bishop Miege is finding success in many areas currently, but that hasn’t always been the case.  Most success in any school runs in cycles – basically related to a group or class of athletes and/or a particular coach. I imagine the classification of any school impacts who they have to play in the postseason.” 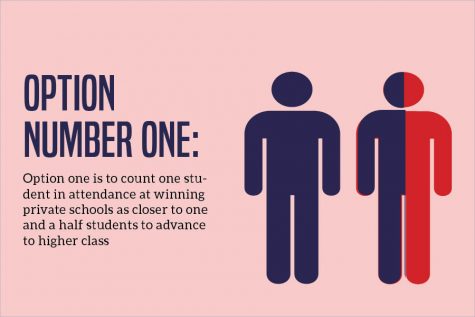 At the same time that Hines is pushing for these changes, KSHSAA has discussed two plans during its most recent meeting on Jan. 11 to potentially put 36 schools in each classification or create eight championships/classifications for football. Both parties have not gained traction to make any immediate changes thus far.

According to senior Chris Hoog, who transferred to Mill Valley after his sophomore year at St. James, the potential change could possibly benefit private schools with a much needed challenge in some sports.

“Private school athletics will continue to thrive if they are being put into a higher class because they will be put against higher competition,” Hoog said. “They will undoubtedly struggle at first because they won’t necessarily have the talent that a bigger school does, but it will push them to improve their program in a given sport and excel.”

Hines and Heatherly gave out a survey to KSHSAA member schools to gain support with a response rate of 80 percent. Of the schools that responded, 82 percent of schools were in Kansas support change regarding private school classification.

However, the Kansas Senate Education Committee held a hearing over the bill on Feb. 13 and a week later deciding to take no action. The Kansas Senate is currently reworking the school funding formula, taking attention away from the issue. Hines hopes to force movement at the upcoming April 28 KSHSAA meeting. 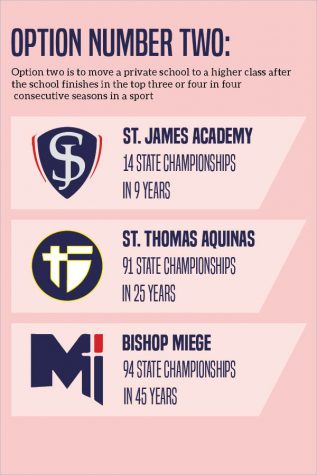 The bar is set higher for private schools, according to Hoog who believes that public schools have more leeway when it comes to success on the field.

“The standard for high school sports in private schools is already set higher than public schools,” Hoog said. “A school like Pembroke Hill or St. James is expected by their own administration to perform better overall in athletics then a public school like Mill Valley is.”

Hubka agrees with the changes as long as the potential changes apply to both public and private schools seeing that “there are currently two many state championships for the size of Kansas is.”

Even with the current standstill with both Kansas state legislature and KSHSAA itself, Hines hopes that one of his proposals will pass to fix the current system.

“KSHSAA needs to implement these changes to do what is ‘best’ for Kansas kids,” Hines said. “It is not right to allow a select few students from elite private schools take opportunity away from small town schools. I want to be clear it is not the fault of the players or coaches of these private schools, the system is broken. Many don’t know this about me but my 3 daughters all attend a private Catholic school yet I am leading the charge to correct a problem that has existed for many decades.“