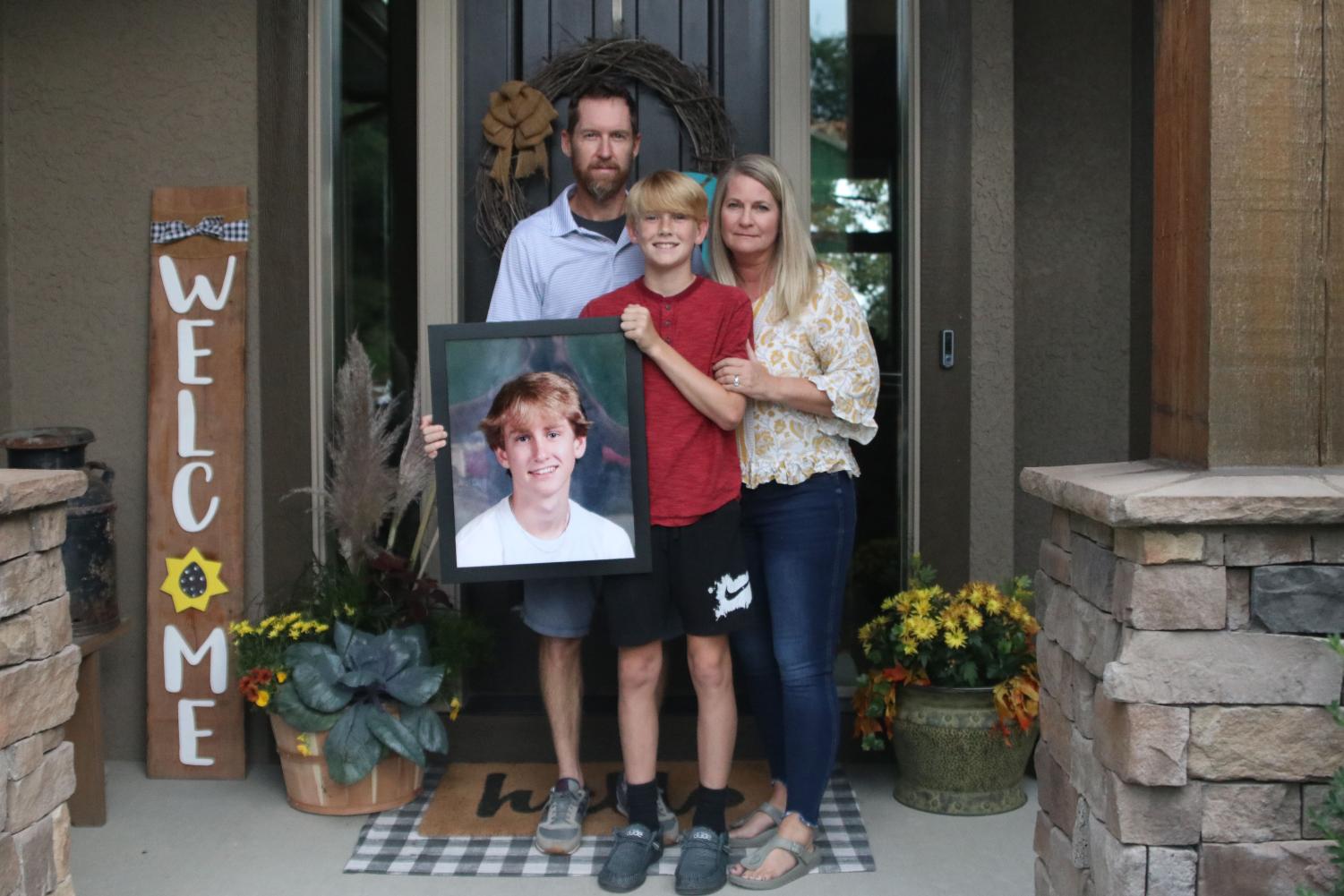 The Davis Family, despite their recent loss in August, want to let Cooper’s life serve as a lesson to those who abuse drugs. (By Hayden Resch)

The Davis Family, despite their recent loss in August, want to let Cooper’s life serve as a lesson to those who abuse drugs.

The death of Cooper Davis shows the school community how dangerous drug usage is and the effect it has on others.

After the death of junior Cooper Davis on Sunday, Aug. 29, the school has taken the opportunity to recognize the issues that come with the increasing availability and abuse of drugs. According to his toxicology report, Cooper died due to taking a synthetic pill laced with fentanyl. Cooper’s family hopes to use his story to spread the message that people should not take pills that are not prescribed to them in order to prevent more deaths. Between stigmas that prevent people from reaching out for help with drug abuse and increasing access to substances, drugs continue to claim the lives of countless adolescents each year. Although Cooper lost his life to drugs, he fought his usage, going to treatment centers and encouraging others to not repeat his actions. His story is a cautionary tale of the dangers of drug abuse, but there is hope.

As drugs have become a common topic in our society, more adolescents like Cooper are exposed to drugs and their effects.

The Adolescent Center for Treatment specializes in intensive help for youth with serious emotional and behavioral problems, with 3.4 million teens receiving mental health services annually. According to director Kevin Kufeldt, poor mental health conditions can often result in the usage of drugs.

“Oftentimes the two go hand in hand. Roughly 75% of the youth that I serve in my residential program have a co-occurring disorder,” Kufeldt said. “Mental health conditions put a person at an increased risk for having a substance abuse problem.”

Mental health conditions put a person at an increased risk for having a substance abuse problem.”

“I think that people start to use drugs because they think it’s going to help them escape from their perception of their reality,” Libby said. “If they’re feeling like they’re in a dark place, they just want to escape. 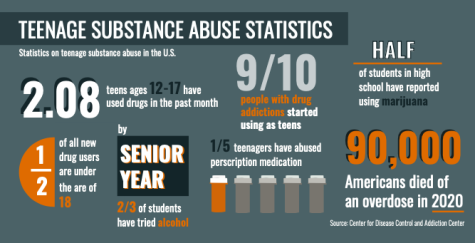 They use drugs to do that. But the sad part is that it’s a temporary escape, and it really doesn’t fix anything.”

Sophomore Reagan Raether, one of Cooper’s closest friends, agrees with this, believing that some people look to drugs because they are unaware of another way to manage their stress.

“It might have been the first thing they thought of to cope, instead of all these other things that we do,” Raether said. “Some people have healthier coping mechanisms, some don’t.”

Has drug abuse ever affected your life?

Raether believes that social media and what teens are exposed to online can impact what they think is okay to do, such as drugs. When a teenager’s favorite artist sings about doing drugs, it can lead them to think in the wrong direction.

One of the most popular ways teenagers sell and buy drugs is through social media apps such as Snapchat, where, according to Libby, drugs become easily available, even to minors.

“Drugs are so accessible, and it’s easy for kids to get their hands on drugs,” Libby said. “I’ve seen with my own eyes on Cooper’s Snapchat account advertisements for the people in this area that are selling drugs and vapes and illegal things, and it’s just right there, that easy to get and so close to home.”

Although popular culture can glorify drug usage such as in music, the reality is that using drugs has countless negative effects, according to numerous experts.

Drug users may attempt to stay away from drugs, but it’s often not enough, as the drugs have too strong of a hold on them to be able to quit. According to Kufeldt, drug users often struggle to quit because they want to avoid the feelings that 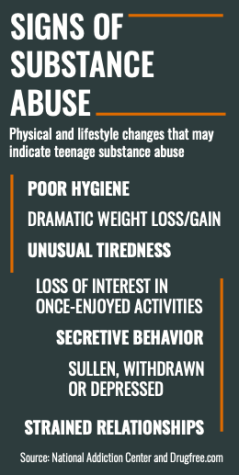 “The brain experiences a decline in functioning and has a difficult time rebounding from excessive use,” Kufeldt said. “Users will often experience both physical and psychological dependence. Both cases give the user the impression that they have to use [drugs] to feel better resulting in a vicious cycle of continued use just to avoid pain, sickness and death.”

When someone uses drugs, it can take over other aspects of their life, something Libby witnessed firsthand with Cooper.

Cooper’s close friends witnessed him start to spiral into this routine of canceling plans, skipping activities and missing out on everything to do drugs. Cooper’s declining interests didn’t only impact him, it impacted his relationships with friends and family. Raether believes Cooper’s friendships became more out of reach, such as with sophomore Carley Broyles, his girlfriend.

“I know it mentally broke [Broyles] down,” Raether said, “But, we all know Cooper loved her to death,

and he just didn’t know how to show it, and he wasn’t going to stop [drugs] for anyone.”

Drugs can take someone’s life at any moment. Cooper was taken from Broyles suddenly, and she wants people to appreciate those around them.

“People should be smart and not take anything for granted. Tell anyone you love that you love them. I didn’t get to say I love you to him,” Broyles said.

People should be smart and not take anything for granted. Tell anyone you love that you love them. I didn’t get to say I love you to [Cooper]”

One side effect of drug usage is that people often forget about the drug user’s true character. According to Libby, Cooper was a naturally kind person who strived to help others.

“If we ever walked past a homeless person, we could not get past them without Cooper saying, ‘We need to do something. We need to give him something. Do we have food, water, or money? We have to give them something,’” Libby said. “He also had a really sweet heart for kids with special needs. We learned there was a staff member [at Cooper’s treatment center] that had a son who was autistic, and he would tell us that Cooper would always use his free time to teach this autistic boy how to fly a kite. He had a good heart.”

How to get help

There are ways for adolescents to get help, but first, they must acknowledge they have a drug abuse problem. According to Kudfelt, it is hard to get a drug user to continue and comply with a program, especially if they cannot admit to having an issue in the first place.

“Adolescents have a difficult time admitting that their use has resulted into a problem,” Kufeldt said. “Many times, adolescents haven’t lost much [like their] family, house, car, job, [or] kids. They haven’t hit rock bottom. There are limited resources. Adults have several options from detox facilities, oxford homes/half-way houses, community-based support groups, treatment centers, [to] hospitals. Currently in Kansas, my program is the only residential facility in the state [for adolescents].”

To get the necessary treatment, it takes both the child and the parent to acknowledge that extra help is needed and take action to get it. Sometimes, parents may be embarrassed by the situation or children are too scared to ask for help.

According to Libby, when the Davis family realized the seriousness of Cooper’s drug usage, they chose to enroll him in an eight-month out-of-state program. The progr

am, beginning in March 2020, fit well with the family’s philosophies and included a 90-day addiction treatment plan.

“Eventually, we knew he needed more help because we had essentially lost the ability to

and it was located in Arkansas. He spent a total of eight months in Arkansas. Their philosophy was to just help troubled teens become mentally sound, academically strong and prepare them for a strong future, which is all the things we really wanted to get Cooper’s focus back on.”

According to Kufeldt, drugs have become increasingly potent and dangerous in recent years, something many may be unaware of, and he works to educate communities on these dangers.

“Much of what I focus on are the growing trends in adolescent use as well as terminology,” Kufeldt said. “I also spend time educating parents on the potency levels of drugs, as many of them have increased since they were teenagers. [Generation Z] is really a guinea pig generation [and]  is exposed to higher potency marijuana, synthetic cannabinoids, synthetic opioids and other synthetic amphetamines.”

Until we come together to try to get this drug problem under control, it’s going to continue to take lives”

Until more is done to combat the accessibility and usage of drugs, Libby believes they will continue to hurt more and more families.