Running out onto the field, senior Trevor Wieschhaus waves the American flag.

The Jags complete a come-from-behind win against St. James Academy on Friday, Sept. 7 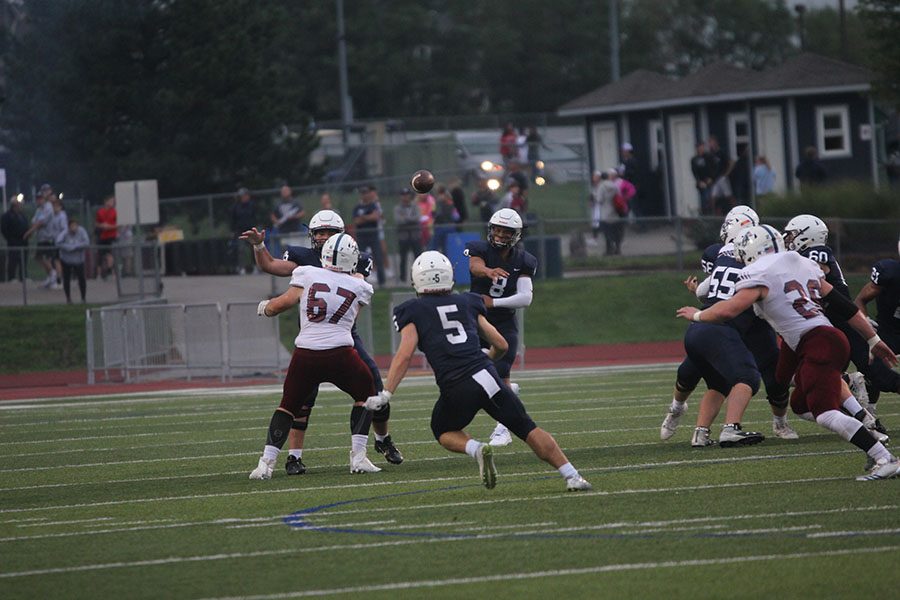 The Jaguars won their Homecoming game scoring two touchdowns in the fourth quarter for a come-from-behind win against the St. James Thunder on Friday, Sept. 8.

The Jags kicked off to St. James to begin the game. After both teams punted on their first two possessions, senior linebacker Chase Shryock recovered a fumble by the Thunder, but the Jags failed to capitalize off of it.

St. James scored the first touchdown of the game, but failed to convert on a two-point conversion. This put the Thunder on top 6-0 with 7:12 remaining in the first half. They went into the second half with the lead.

According to senior wide receiver Jayce Zukowski, the team improved throughout the game.

“We really came together as a team as the game went on,” Zukowski said. “We weren’t really doing that at the beginning of the first half.”

During halftime, Matt Santaularia and Lilli Milberger were crowned Homecoming king and queen.

Senior defensive back Tanner Moore ran the ball back to the St. James 38-yard line to start off the second half for the Jags. This set the Jags up for a field goal attempt, but senior Jack Matchette’s kick was tipped.

When the second half started, it began to rain. Senior defensive back Nick Davie thought the weather gave the Jags the advantage.

“The weather helped us a lot because they struggled to pass it in the rain,” Davie said. “We could shut down the run.”

With 3:26 remaining in the third quarter, St. James scored another touchdown and completed the extra point attempt. This brought the score to 13-0 and the Thunder led going into the fourth quarter.

“One thing we always talk about is finishing strong, whether it be in the weight room or at practice,” Hudgins said. “We talked about that on the sideline and the guys responded really well.” 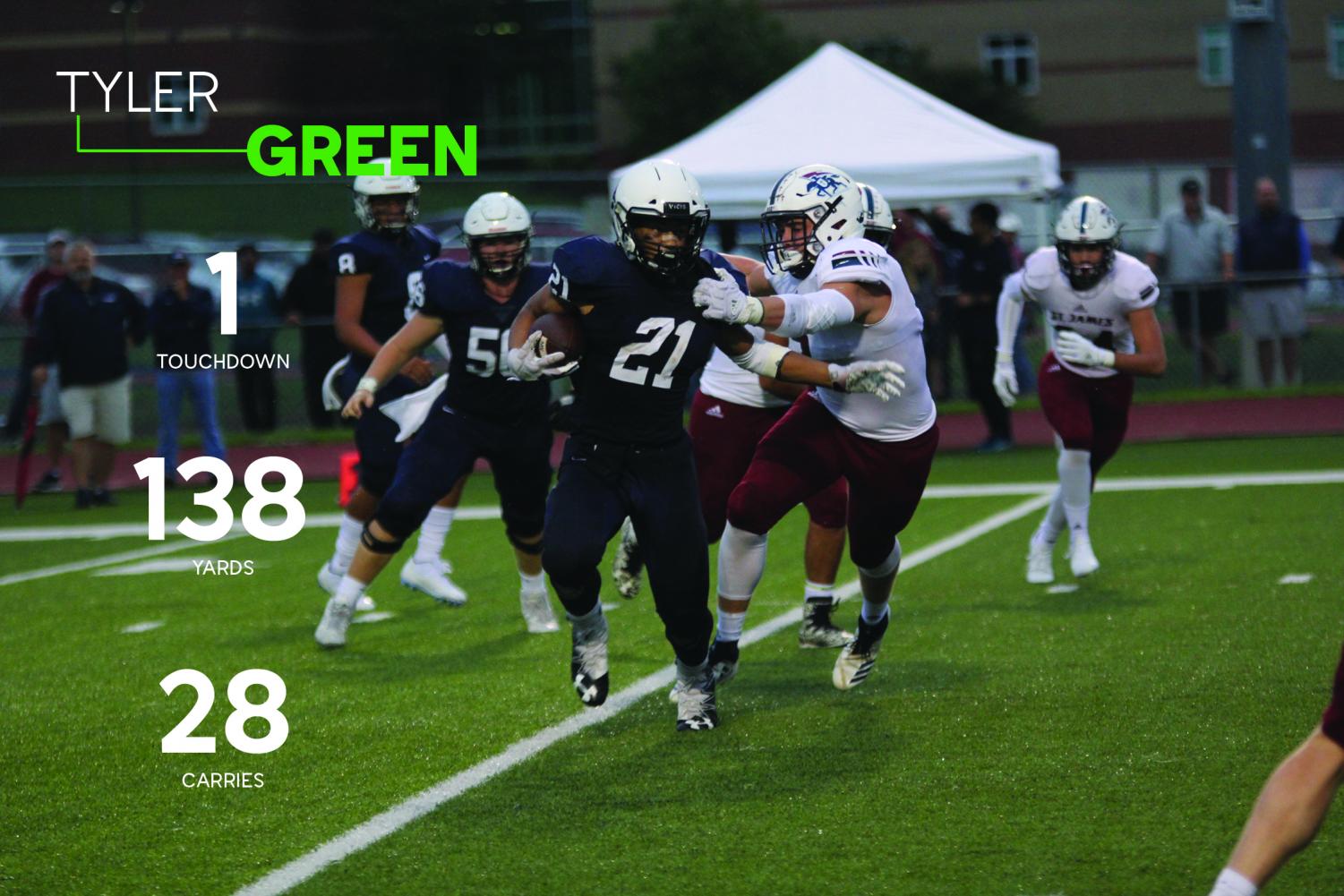 By Mia Thomas
Midway through the fourth quarter junior Tyler Green ran the ball in for the Jaguars’ first touchdown. Matchette completed the extra point attempt, bringing the score to 13-7.

Davie believed the defense was consistent throughout the game and once the offense started scoring, the team came together.

“The defense played well and we knew the offense was going to get it,” Davie said. “Once they started moving down the field, the energy picked up and we all came together.

The following drive, the Jags made two tackles for losses, forcing a punt from St. James.

With the momentum on their side, senior quarterback Jordan Preston completed a pass down field to senior wide receiver Logan Talley for the Jags.

Zukowski caught a pass from Preston in the endzone to tie the game. Matchette kicked the extra point, putting the Jaguars on top 14-13 with 1:31 remaining in the game. 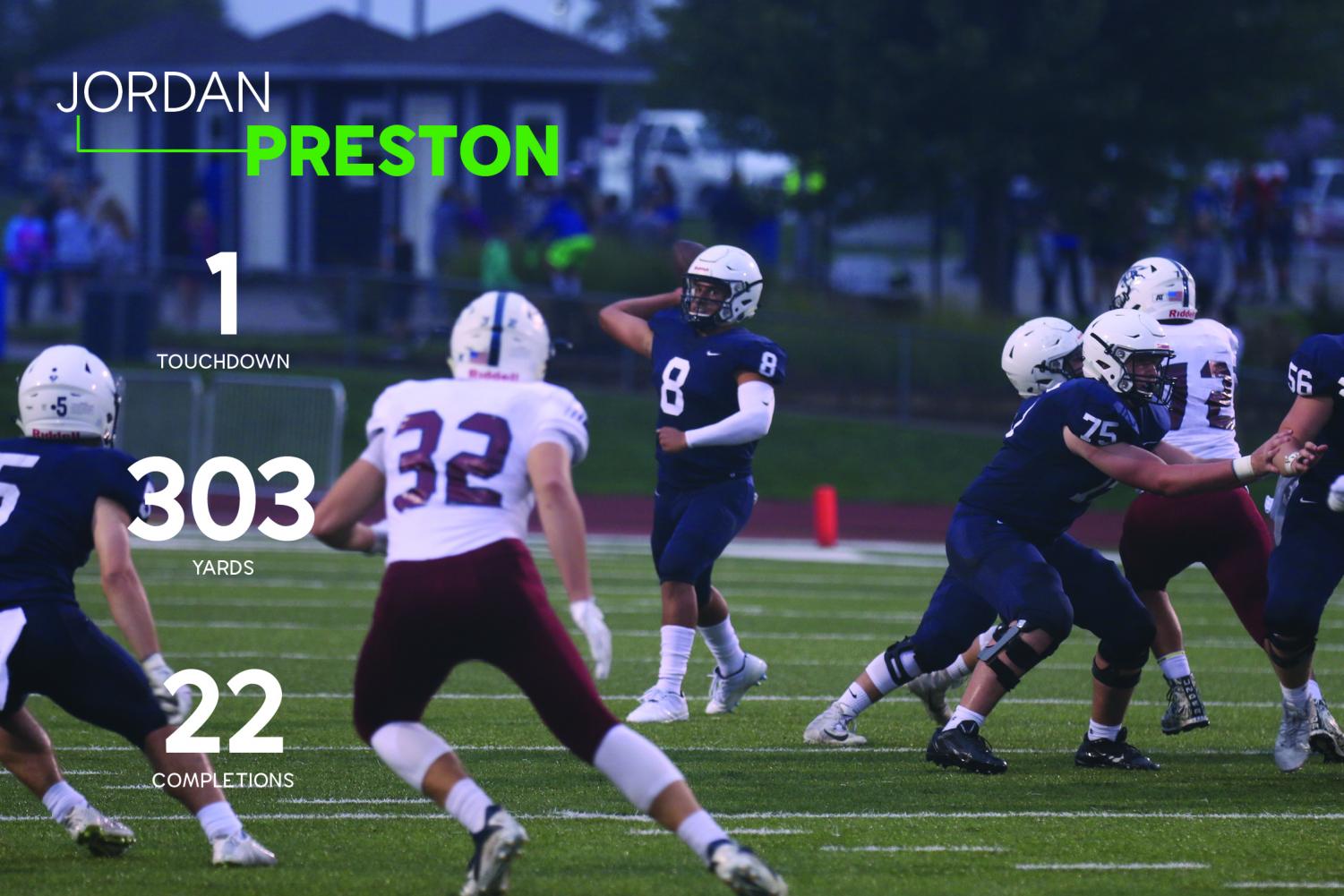 Zukowski gave his team recognition after his touchdown to tie the game.

“It felt amazing, but I can’t take all the credit. My team put all that work in too,” Zukowski said. “Everyone stepped up and started making plays at the end. That’s what we needed the whole game.”

Davie intercepted the ball from St. James in the endzone with 26 seconds left, sealing a win for the Jaguars.

The Jags will take on Bishop Miege in an away game on Friday, September 14.

Hudgins believes next weeks game is important and hard work all week will be necessary.

“Preparation starts tonight, so we’ll get back and start breaking down Miege,” Hudgins said. “That’s a huge game. They’re one of the best teams in the area, so we just have to work hard all week.”