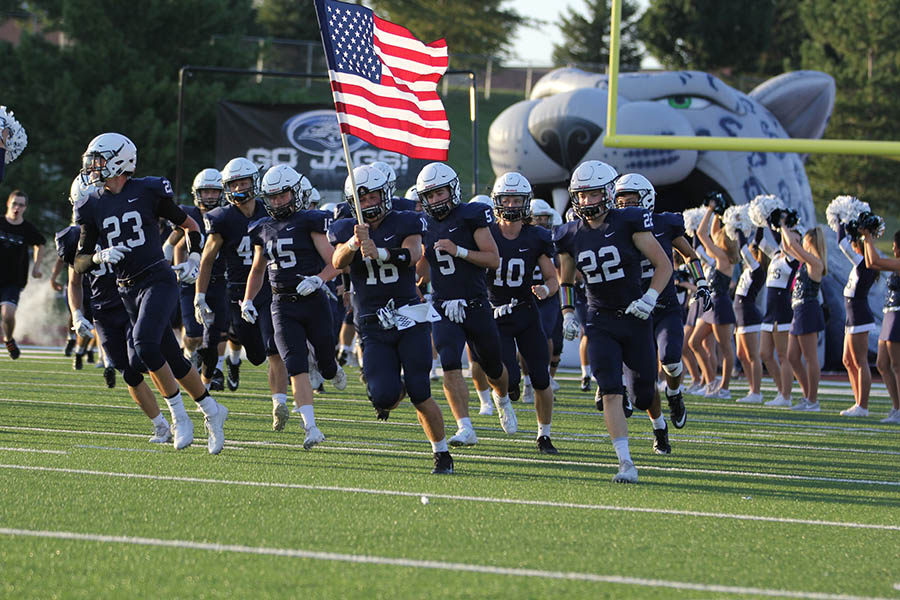 As senior Evan Rice is holding the American Flag, the football teams runs out onto the field before the homecoming game on Friday, Sept. 9.

The Jaguars are victorious with a score of 35-14

Gallery|17 Photos
By Kendall Gaignat
As senior Evan Rice is holding the American Flag, the football teams runs out onto the field before the homecoming game on Friday, Sept. 9.

On Friday, Sept. 8, the Jaguars won their homecoming game against the Blue Valley Northwest Huskies.

After kickoff, the Jaguars started their first drive from the 15-yard line. Later on in the first quarter, junior defensive back Eli Midyett recovered a BVNW fumble caused by junior linebacker Sage Sieperda.

“[It was] one of the most exciting games I’ve ever been in,” Rice said. “It was a fast-paced game.”

The second quarter started off with a 80-yard kick return and touchdown by BVNW. Tied 7-7, junior defensive back Tanner Moore’s tackle resulted in a turnover. Proceeding to the end zone, junior wide receiver Matty Wittenauer runs the ball in for a touchdown.

Flaming kept the ball and scored again, leaving the team ahead 20-7 at the end of the half. He believes that the game ended better than the season opener against St. James.

“We executed our plays way better than last week,” Flaming said. “That was our main goal this week, and we did that very well.”

During halftime, the homecoming candidates took the field. Flaming and Bella Hadden were crowned king and queen.

Jaguars started the second half with the kickoff, which led to a BVNW fumble and recovery by Midyett. Rice scored a 38-yard touchdown, advancing the score to 27-7. The Jaguars ended the quarter with a sack by senior defensive lineman Ike Valencia.

Rice was impressed by the team’s defensive plays throughout the game.

With five minutes left in the game, BVNW scored a touchdown and successfully obtained the extra point, putting the score at 27-14.

From the BVNW 11-yard line, junior wide receiver Logan Talley scored a touchdown. Rice followed up with a two-point conversion in the final minutes of the game.

Flaming said that although the beginning of the second half was rough, the team ended up pulling through in the end.

“Our offense went through a little struggle through the second half, but we showed hope at the end of the game,” Flaming said.

While Rice thought the team played well, he said there were still improvements they could make.

“[We could improve] our toughness,” Rice said. “Getting up to the ball and telling ourselves we’re not hurt [and] we’re not tired.”

Defensive coordinator Drew Hudgins believes the ups and downs that the team goes through during the season will serve as motivation to work harder.

“When bad stuff happens, we bounce back right away,” Hudgins said. “We’ve got to continue to push for improvement week in and week out.”

The final score of the game was 35-14 Jaguars. The Jaguars are currently 1-1 and will play Blue Valley Southwest on Friday, Sept. 15.