Though CTEC has provided students with new STEM opportunities, some students have found that it has shed light on the disproportionate amount of males in STEM.

Many students attending CTEC have experienced this uneven ratio in their classes. Vosburg, who works as an intern at Cerner during one of her blocks, finds that more students in her classes tend to be male.

“There’s definitely a lot more males than females. In my Digital Electronics class, I want to say there’s maybe four or five females and I think it’s a class of 20, so it’s definitely male-dominated,” Vosburg said. “And [at Cerner] I am the only female on my team, probably of ten to twelve men. Within the past two years, there’s probably one or two girls that I’ve worked with at Cerner, so I think this career field is definitely male-dominated.”

According to McLeod, his robotics classes are comprised of entirely male students, and the robotics team is about 75-80% male. However, in the other STEM classes he teaches, the gender ratio has been “pretty close to 50/50 across the years.”

Although some classes have a more even gender distribution, Swartz explains that the district has been working on advertising strategies aiming at increasing gender equity in STEM classes even before the existence of CTEC.

“Something in Career and Tech Ed that we’ve been talking about quite a bit is equity in CTE and STEM, and just making and thinking about how we advertise some of our pathways,” Swartz said. “Let’s say I wanted to advertise construction. Maybe we start thinkingabout adding in more images of females in construction. Kansas has talked about equity for quite some time, and I think a lot of it has to do with our federal workforce and innovation opportunities because they want to make sure that there’s equity in employment. If you don’t see someone that looks like you in that career, then how do you see yourself doing it?” 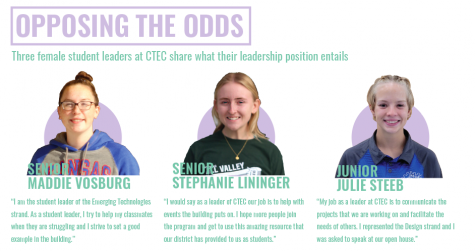 Nationwide, women are nearly half of the U.S. workforce but make up only  27% of STEM workers. As the only female on her team at Cerner, Vosburg has experienced both the positive and negative effects of this gap personally.

“I don’t want to sound dumb, especially working on a male-dominant team,” Vosburg said. “I don’t want [male co-workers] to judge me because I’m a girl, or them see me as inferior to them. It definitely makes me work harderand take pride in myself that I can work with men like this or maybe even better than them.”

Although Long believes she feels similar to how boys in STEM do about the field, she also recognizes that there are some positive elements to being a girl in STEM.

“[I feel] no different than I think a boy in STEM would feel honestly,’’ Long said. “I want to go into engineering and I’m considering the University of Nebraska’s engineering department. While there are definitely going to be less girls in the engineering department, just because it isn’t encouraged in girls as much as boys, you can actually get scholarships simply for being a girl that wants to do STEM. They want girls in STEM, it makes them look better. So I’ve honestly been a little biased for being a girl in STEM.”