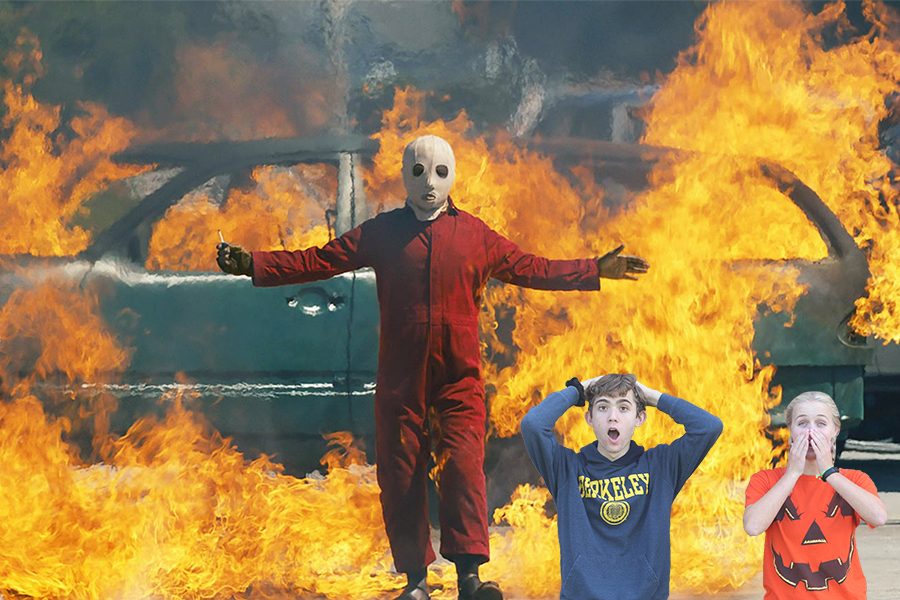 This week we watched the most recent Jordan Peele movie, titled “Us.”

The 2019 film explains the story of Adelaide and her family encountering and battling the doppelgangers that she had been sensing a visit from for years.  In a confrontation between both the “good” and “evil” versions of Adelaide, a secret buried for decades is dug up, shocking the audience, her family and especially her son.

Without further ado, let’s get to the review:

Molly Smith: Similar to “The Shining,” the scary parts of “Us” are not entirely one of a normal horror movie. The scare factor is built upon the foundation of making the audience feel uneasy. In addition, there is also a strong presence of suspense and jump scares (not the cheap kind) scattered throughout every moment that contribute to the horrifying aspects of this movie. The most unsettling part of “Us” is the operatic soundtrack paired with both random bunnies in cages paired with the “Hands Across America” campaign coming to life with a fence of doppelgangers bringing inevitable doom to the inhabitants of Santa Cruz, California.

Ben Wieland: “Us” is a pretty consistently scary movie, or at least it was for me. It does an excellent job of building suspense, and the unconventional settings and situations create more tension than a usual horror film simply because I had no idea what to expect. There are some incredibly well done scenes — specifically, the first introduction of Adelaide’s “tethered” counterpart in the living room and anything involving the children was terrifying. More standard horror scenes, like Adelaide’s descent into the underground holding facility for the tethered, go from “meh” to moving thanks to Michael Abels’s score. The only thing that held this movie to a score of four for me was the immersion-breaking voice of Adelaide’s tethered self  — don’t get me wrong, Lupita Nyong’o’s acting is still impeccable, but her voice sounds more like a two-pack-a-day smoker than a horrifying monster.

MS: As we started this movie together at another friends’ house over the summer, we had viewed around half the movie without finishing. Not knowing I would be starting a horror movie review blog, I intentionally let said friend spoil the end of the “Us” for me. Most of the time, this wouldn’t be an issue for horror movies, but with the unique layout of the film’s plot, the audience was designed to not be in the know of the movie’s underlying message and story. Already knowing the ending from the middle of the movie, I ended up being more confused than I would have been if the movie wasn’t spoiled since the storyline was designed for an unknowing audience. Other than not being able to fully grasp the movie’s deeper meaning, altogether, this was one of the most nicely executed plot heavy films that we have seen in the past two months.

BW: To be quite honest, until the last ten minutes of the movie, I was underwhelmed by the story. It didn’t really click, even after Adelaide explained the backstory of the film. However, once the big reveal and twist about Adelaide’s true identity came, everything in the film made perfect sense. So many little details that had stuck with me, mostly because they seemed extraneous or unnecessary, fell into place. The reveal was incredibly well done, and the story was pretty original and all tied back together in the end. However, I still don’t really understand some of the choices that were made in the story — why did the tethered all hold hands, outside of a petty revenge scheme from Adelaide? The story also left some plot threads unresolved, presumably leaving them for a future sequel, but the uncertainty over the tethered experimentation program looms massively over the ending of the film.

MS: Aforementioned, the plot was a vital role in with the multilevel nature of this film. “Us” contains three observed levels, these being the surface level plot, the revealed plot twist at the end and the deeper meaning of the two combined. The deepest level of the film focuses on the meaning of there being doppelgangers in the underground across America, mirroring the aboveground in their every move. Some viewers have taken this simplistic level to represent the divides between the upper and lower class, meaning that despite the constant strive to be just like the upper class but their limitation is the monetary class that they were born to and nothing else. This is not the only deeper meaning in the film, something as simple as the title “Us” containing a double meaning of us-like you and me and U.S. The U.S. side of the double meaning ties back to the deepest level of the movie’s symbolism that attacks the divide between the upper and lower class in the United States despite the positive connotation our country has in acceptance and new beginnings.

BW: The more I think about this movie, the more interpretations I come up with for its meaning. Immediately after viewing, It might be about the relationship between oppressors and the oppressed, as I initially thought after the film — once the tethered Adelaide escapes the mirror, she forgets about how terrible her life was underground, and how the little girl she switched with must be feeling; the Adelaide forced into the mirror spends decades plotting her revenge against her aboveground oppressor. Now, I see it as more of a movie about inequality. Either way, there’s a lot to notice in this film, which makes it really interesting upon multiple viewings. The production design was fine, and didn’t have any glaring issues, but it didn’t stand out for me either. The only exceptional part of the film’s production for me was the score, which I really enjoyed, but outside of that there was really nothing stellar.

MS: With the combination of the complicated plot and the unpredictable doppelganger characters from below the surface, this movie made for a satisfactory combination of discussion and laughter. The more and more Ben and I watch horror movies, the more we notice how numb we are to scary movies and their stories. So most of the time, I look at the categories from the standpoint of a first time viewer who isn’t an avid horror movie watcher, which actually makes it more enjoyable. But in this case, “Us” accomplished a unique story that allowed me to go along with the plot as a viewer instead of a reviewer who has seen far too many horror movies

BW: I had an excellent time watching “Us.” Molly touched on this a little bit, but we’ve both become a little bored of traditional horror films, and this movie was a welcome departure from that. I was really intrigued by the plot of this movie, even if I was a bit disappointed by the result, and the scary and suspenseful scenes were legitimately scary and suspenseful instead of being bland or laughably bad. While there are some moments where the film drags a bit, for the most part, it was exceptional at breaking the mold and providing a good horror film experience.

MS: “Us” excels in all categories due to the strong foundation of a multileveled plot line, creating an interesting film for both film and horror fanatics alike to enjoy.

BW: This movie was very interesting from top to bottom. The scares were scary, and the plot was interesting; even today, I can’t get some of the more philosophical portions of this film out of my mind. Jordan Peele is quickly becoming one of my favorite horror directors between this film and “Get Out,” and this film is incredibly well done.

Have a fiery Friday!