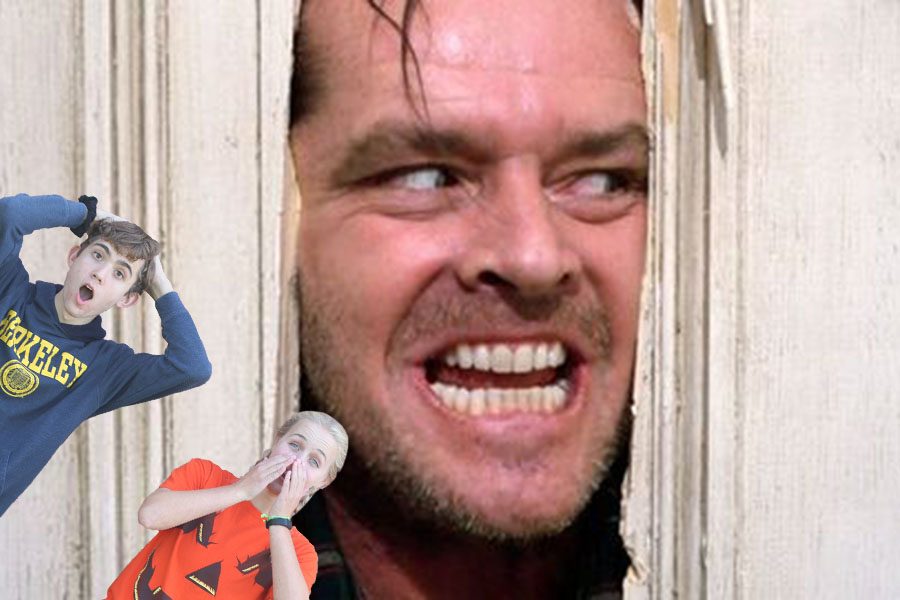 This week we watched yet another Stephen King film, “The Shining” (1980), directed by Stanley Kubrick.

The classic horror film, directed by Stanley Kubrick, tells the story of Jack Torrance (Jack Nicholson) taking his family on a journey to Overlook Hotel in Colorado for the winter. Jack’s position is to look out for the hotel in its off-season, making for a tedious 5 months for him to defeat his writer’s block. The hotel, located on an Indian burial ground, strengthens the power that Jack’s son, Danny, has referred to as “the shine.” The prime location and isolation allows for the entirety of the Torrence family to face the unraveling of their sanity.

Molly Smith: Reflecting on the horror movie genre and its classics, “The Shining” is one of those movies that stick with people through all the different types of scary movies. While atypical in the usual grain of horror films, Stephan King was not writing this story to scare the audience. He was actually writing to make the audience as uncomfortable as possible. That was accomplished by the combination of lead Jack Nicholson and director Stanley Kubrick each being practically insane when it comes to their filming methods. With the mental state and determination of the leading figures, this filmed accomplished high discomfort levels easily with dedication to small details such as the unsettling angle of Jack’s eyebrows.

Ben Wieland: “The Shining” is a classic, and for good reason. Some of its scenes are haunting and memorable — the iconic “here’s Johnny!” scene sticks out as an iconic and terrifying scene. Lesser-known scenes also provide good scares; when Jack’s wife Wendy discovers his typewriter and then threatens Jack with a bat, it had me on the edge of my seat until a break in the action. However, there are also some scenes that go for horror and fall way short: Wendy’s discovery that “REDRUM” spells “MURDER” in the mirror was one especially cringy moment that made me laugh out loud instead of recoil with fear. “The Shining” also doesn’t have the quantity of scares that most horror movies do, choosing to focus more on the psychological deterioration of the characters, which makes it a better movie but also a less scary one.

MS: “The Shining” is one of my favorite horror movies because of the plot itself. The aspect of Danny having supernatural powers draws the audience to create their own interpretations of the meaning of this power. Members of the “The Shining” fan base have discussed the meaning of “the shine” that danny has, going as far as drawing connections to abuse or mental health. Ignoring the actual meaning of “the shine” to focus on the magic of this movie, I have chosen to focus on the insanity Jack endured. I believe the cause was not cabin fever, but it was actually because of his lack of mental strength and the fact that he probably unknowingly experienced aspects of “the shine” as well. Despite “the shine” aspect of the plot, I found the remaining levels of storyline to be engaging. Despite some of the scenes being somewhat boring, this actually engaged the audience further since all the other scenes were so extremely unsettling that something was bound to happen soon.

BW: The plot of “The Shining” is pretty compelling. Everything that happens is pretty logically consistent, and all the characters act as I expected them to, given the situation. Typically, in horror films, characters trying to survive the scares become bumbling idiots; for Wendy, this isn’t the case. She outwits Jack and manages to survive along with her son. The story is also intriguing and left me wanting to know as much more as possible about the mysterious “shine,” especially thanks to the final shot of the movie. However, this cliffhanger is also my biggest problem with the movie. There are just too many unanswered questions about the “shine” by the end of the movie, which left me confused and dissatisfied about that aspect of the film.

MS: The most powerful part of this movie is the message it sends to the audience with exquisite production and cinematography techniques. More specifically, I think the set and the effective use of satisfactory shots in filming turned this film from merely a horror movie to a cinematic masterpiece. This artistic aspect of the movie is carried throughout from start to finish, the beginning starting with beautiful shots of the mountains that in today’s day in age would be filmed with a drone, but were actually filmed with a helicopter for the 1980 film. Inspecting each individual shot, present is an element of photography such as rule of thirds, wide, worms eye, birds eye, depth and framed shots. There is not a single shot in this film present without one of these aspects, adding a second level to each shot and to the audience’s ability to not look away to the movie’s satisfying image as a whole.

BW: This movie is gorgeous. Absolutely gorgeous. Everything (with one exception, the transitions) is performed to perfection: the set design, the audio design and most notably the cinematography. Molly and I had some conversations during the movie just talking about the different varieties of shots that cinematographer John Alcott and director Stanley Kubrick incorporated. Molly explained most of the specifics in her portion of the review, but I was just taken aback at the creativity and beauty of the movie. More so than any other horror film we’ve reviewed thus far, “The Shining” is artful.

MS: Taking after my mother, I enjoy introducing classic movies to my friends. For me, I had a lot of fun watching Ben experience the beauty of this film’s structure while simultaneously  experiencing extreme discomfort. This being a more in depth view of the film for me than I’ve had in the past, the most enjoyable aspect I had was picking through the endless clues that Kubrick left for viewers to discover in repeated viewings.

BW: I personally had a very good time watching this movie for the first time. It’s a really compelling story, and while at times (especially the beginning) the story drags, most of what happens kept me enraptured. I was thoroughly entertained.

MS: Looking at the big picture, this is one of my favorite horror movies due to the off-quo horror plot. Cinematically, the movie is both satisfying and gorgeous, especially for a 1980 horror movie, which usually aren’t of the artistic nature. The combination of such high ratings in all the aforementioned categories truly allows “The Shining” to be a classic.

BW: “The Shining” is an interesting look at its characters and a unique horror story. While the confusing elements of the supernatural plot leave a bit to be desired, compelling scenes and beautiful cinematography and set design make this film a classic.

If you would like to learn more about Danny Torrence’s life after the scarring events that occured at the Overlook Hotel, check out star Ewan McGregor as Danny on Friday, Nov. 8 for the premiere of the second film in “The Shining” series, “Doctor Sleep.”

Have a frightful Friday!