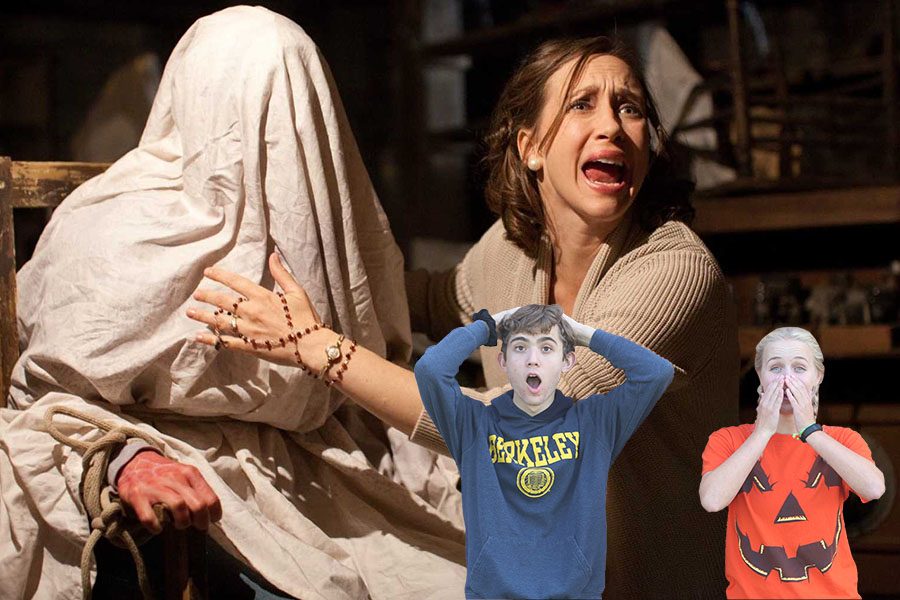 Welcome back to another week of Friday Night Frights!

This week, after much deliberation and a few changes of plans, we decided to watch a James Wan’s horror movie starring Patrick Wilson and featuring a haunted family — and it wasn’t “Insidious” (2010). Instead, we watched “The Conjuring” (2013), a film featuring a medley of classic horror tropes: a haunted doll, an evil witch, a possessed family and probably any other stereotype you can think of.

Without further ado, let’s jump into what we thought of “The Conjuring:”

Molly Smith: While the “The Conjuring” managed to make me jump with classic jump scares, the movie lacked a depth in storyline that made it more confusing than scary. Since this was my second time viewing the film, I was rarely scared despite the attempts made by the producers to spook the audience. To take a case in point, there were many instances of closing or adjusting a mirror and seeing a haunted in the figure. At this point, I’m unsure why multi-million dollar films like “The Conjuring” continue to use such an elementary way of thrill.

Ben Wieland: “The Conjuring” has its moments when it comes to horror. A few scenes in the first act stick out as especially scary, and while the ending was fairly uncreative, it did elicit a few good scares out of me. Outside of those few moments, though, the film was extremely lacking. The second act is especially unmemorable and offers viewers almost no substantial scares; the one scare that is attempted in the middle of the film, best described by one of my co-viewers as “a ghost Sharknado,” is comically bad both in the absurdity of its idea and the ridiculousness of the CGI used to execute that idea. The few scary scenes are really good, and they do outweigh the dearth of scariness throughout the rest of the movie, so I still gave this movie a solid horror score.

MS: To have a broad overstatement to explain the level of appeal the plot of this movie had, the entirety of our viewing party was cracking jokes and talking the whole time; this was only when they weren’t falling asleep. For the plot itself, it was supposedly based on a true story and since nearly nothing exciting happens in real life, it made for an interesting retelling of what had happened, not for an interesting/enticing horror movie. In addition, at the start of the movie, the viewers are latched onto a storyline involving a doll, Annabelle, this has no purpose in the actual plot except to introduce the so called “demonologists” Lorraine and Ed Warren.

BW: The story of this movie is, at best, uncreative and bland. It borrows heavily from basically every horror movie trope ever — an evil witch, a creepy doll and an exorcism — without ever breaking the tropes or doing anything interesting. Everything about this film is boring. The story is cohesive, at least, which is the only reason I wouldn’t give this category a 1 rating. The plot is also essentially identical in many key parts to “Insidious” (2010), another horror film directed by James Wan, but it lacks the creativity, entertainment and heart that made “Insidious” such an interesting movie.

MS: Aforementioned, the ability for this movie to establish something scary was scarce. The lack of thrill was the main contributing factor in its lack of production and cinematography. It’s hard to believe this was another work of director James Wan since the plot was lacking in so many categories that his other films have had such strong presences in. Since “The Conjuring” is a retelling, there is a lack of depth in every way, making an amateur film overall.

BW: This movie was perfectly mediocre in this category. It wasn’t ambitious or creative. It made no attempt to be anything more than a traditional horror movie. It did, however, do a good job of being a traditional horror movie. Production quality was good, and the cinematography was generally good despite being a bit bland. There was no meaning at all to the film outside its own self-contained story.

MS: Due to our constantly changing schedules, the movies that we have scheduled to release each week are constantly being moved around due to a variety of different variables. This time, we were going to watch “The Shining” but we moved it to another day due to its 2.5 hour run time. While I was initially okay with this switch, I was finding myself bored and yearning for the slightly less boring introduction and exposition of “The Shining.” The entirety of “The Conjuring” is definitely less developed than the first 20 minutes of “The Shining.”

BW: This film wasn’t exactly eye-catching, it was more eye-closing. Two of the three other people I watched this movie with fell asleep during the unnecessarily long exposition in the film’s second act. A combination of the grayed-out color palette, muted audio and overall boringness of the film’s design makes it tedious to watch. The most entertaining part of the viewing experience was helping one of my co-viewers with his homecoming proposal. At best, there are 15 minutes of entertainment to be found in this film. Outside of that, you’re out of luck.

MS: “The Conjuring” is many things, the list of what it is does not include scary, interesting, impressive or enjoyable in any sense at all.

BW: This movie wasn’t bad, but it wasn’t good either. Mediocrity makes for a terribly unenjoyable and boring film, and that’s what “The Conjuring” is.

Have a fearsome Friday!