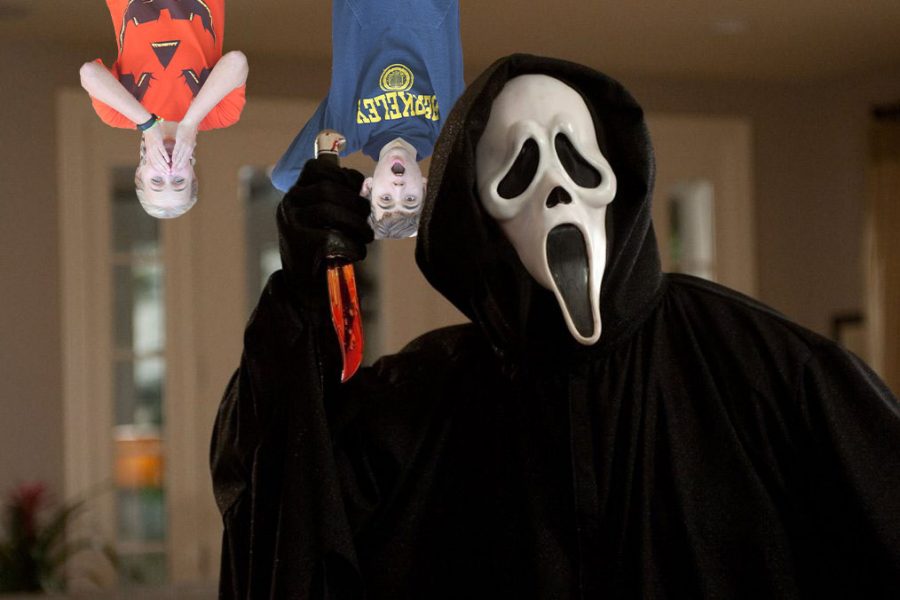 This week, we watched the slasher horror film Scream (1996), directed by Wes Craven.

The classic 90s film takes place at a high school in Woodsboro, California. The story follows its protagonist Sidney as she and her friends get chased by a masked ghost that has committed other murders around their town. Suspiciously enough, this chain of events occurs around the same time as the anniversary of her mother’s death.

Molly Smith: The month of October has been a crazy busy time for the both of us. “Scream” marked the second movie we watched apart, and the first horror movie I watched by myself. The alone factor increased the scare factor of the film that closely follows the scariest part of the movie, the suspense. Constantly, there were suspicious phone calls, masked figures, large houses with lots of doors, dark shadows and isolation. Not only did suspense add to the scare factor, the classic jumpscare was incorporated in a partnership with the easy accessibility of the “Scream” costume for anyone in the city to spook Sidney. Aside from the fear the movie gives to the audience, pain is also invoked in the audience from the several stabbings/murders that occur with such ease from the masked figure.

Ben Wieland: This movie is a bit difficult to rate in the scariness category, becauseI don’t really think it’s trying too hard for serious scares — it just doesn’t really fit with the comedic mood of the film. There’s no difficulty, though, in realizing that the two scenes where the film really goes all-in on building suspense and fear — the opening scene and the climax — are extremely successful. They sucked me in and kept my attention from start to finish, a rarity for horror movies. However, I can’t give this movie a good score, simply because it doesn’t really put in much of an effort. Most horror films throw in too many unnecessarily scary scenes, but “Scream” is the opposite. It avoids cheap scares, but sometimes a few cheap scares are good for a movie instead of bad. I have no doubt that with how much I liked the suspenseful scenes that were included, a few more would have added to the film.

MS: Initially, I started the film ready to see a cheesy slasher, a title blatantly stated in the opening scene. During the first 10 minutes,  the “Scream” ghost that kills Drew Barrymore and eventually more to come is introduced, along with his first couple victims that puts the town on edge. The unknown identity of the mass-murderer keeps the audience on a constant edge, the film leading the audience down at least three trains of thought to guess the identity. The first path being Sidney’s boyfriend, a man presented never without the look of death behind his eyes, Sidney’s father, who has been mysteriously missing for the duration of the attacks and (surprisingly) the chief of police, who happens to have the same shoes as the killer did in the first scene (this is only referred to once). From the time that all that information is presented, all that is left is the audience awaiting the climax, a turn of events even I didn’t see coming.

BW: “Scream” is three different movies rolled into one: a traditional mystery, a dark comedy and a scary slasher. This results in a bit of a jumbled story. However, I think the film does the most it can with the difficult situation it has to work with. I didn’t see the twist coming of there being two killers, which probably speaks more to my ignorance than the plot; in hindsight, clues about the identities of the two killers are littered throughout the story. The movie really does do a good job of selling a semi-serious mystery plot in conjunction to the near-satirical depiction of classic horror tropes. The story kept me guessing for most of the movie, and while the plot falls apart at some points, I think it does a good job overall.

MS: Unlike Ben, I believe that “Scream” possessed a second level of interpretation. While it was commonly quoted that “if you’re a virgin you won’t die” throughout the movie, this was not true in the movie, but the list of people who survived vs those who didn’t all depended on their relation to Sidney. All of the people who died either lied or constantly told Sidney she was making things up, but those who survived to the end were the people who listened to Sidney and almost always took her side. Inevitably, the unnamed killer actually weeded out her enemies, leaving her with the true blooded allies. This correlation can relate to the toxicity of the relationships especially with teenagers across the United States. Nothing about the cinematography really spoke to me and the production was ideal for this movie that was supposed to be just a classic horror movie.

BW: Especially after watching a movie littered with subtext and symbolism in “Us” last week, the lack of any substance below the surface of “Scream” is obvious. The movie doesn’t have much of a message to speak of. The film is a satire of horror tropes, and the characters are pretty self-referential of other horror movies, which gives some parts of the movie a bit of a double meaning; however, that’s it in terms of things the movie gives you to think about. There’s no meaning hidden in the film. The production design is pretty solid across the board, and the cinematography isn’t really noticeable.

MS: Usually, when I watch movies alone, I get bored and end up stopping. This time, I was pulling up the movie at the end of classes to continue watching over the course of a few days. The ex-X rated film director was unafraid to show several scenes with the main characters in a sexual context, making for an uncomfortable explanation to a teacher that could have suddenly looked at my computer screen at any point. Besides that factor, this movie was beyond excellent, satisfying my needs for blood, humor, horror and plot twists in a scary movie.

BW: This movie is a blast to watch. It grabbed my attention from the very first scene and kept it until the credits rolled; in a genre bogged down by overly expositional opening scenes and boring sequences in the middle of films, “Scream” is consistently enjoyable and entertaining. None of the scenes in “Scream” drag or feel too long. The constant quippy humor and references to other horror films make the dialogue interesting, and the ways the film plays with horror tropes are, if not always successful, at least entertaining.

MS: I started the film expecting a surface level slasher with no point other than killing, but the writers truly outdid themselves to create a multi-leveled plot with such a simple storyline. In my eyes “Scream” is one of the best horror movies I have ever seen since the audience’s imagination is played upon to make the movie whatever the audience wants it to be.

BW: While there isn’t much substance below the surface of “Scream,” its consistently enthralling story, scenes and scares make it an excellent movie for letting your brain relax and just having a good time.