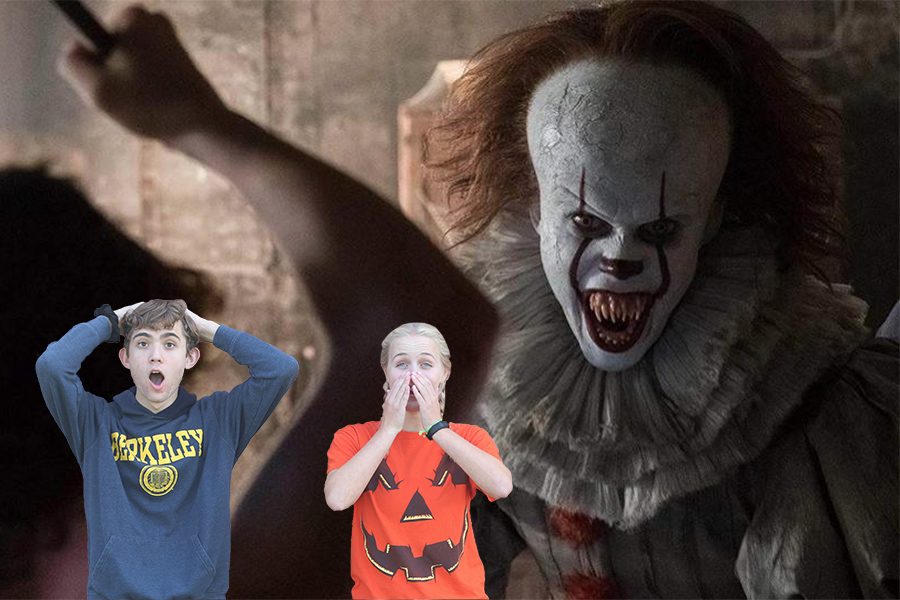 Welcome back to Friday Night Fright!

Last week our goal was to see “IT: Chapter Two” at the Thursday night premiere. Tickets in hand, we arrived at the local B&B Theaters at 4:50 p.m. Thursday. In line for popcorn, the cashier offered to rip our tickets there, and upon noticing that we were not seventeen she very harshly refused to let us in to the theater. Long story short, we failed to live up to our promise of an early review of the film. For future theatrical releases, we’ll plan ahead (or just sneak into the theater).

Once we made it into the theater, though, the movie did not disappoint. The much-awaited sequel to “IT” (2017) follows the Losers Club from the first film as they reunite to fight the demonic clown Pennywise. Here are our (mostly positive) opinions about it.

Molly Smith: In order to create a scary movie, I think that the movie needs a factor of horror that is relatable and manages to linger in the daily life of a viewer post-watch. Since the “IT” series is all about the life of a clown that eats people, it is hard for me to be uneasy about clowns eating me outside of the theater. But, in all seriousness, “IT: Chapter Two” managed to make me jump out of my seat and squeeze my friends hands a sufficient amount of times in nearly every scene whether it was supposed to be scary or not.

Ben Wieland: From the opening scene to the film’s climax, “IT: Chapter Two” is basically a nonstop jump scare. Most of the time in horror, this is fine — some of the jump scares are very well executed, and they usually add to characterizations or the plot instead of just being a scare for its own sake. However, some parts of the film feel like they suffer from one scary moment too many. Most noticeably, in the middle of the film there are six consecutive scenes that all follow the same formula: adult character rediscovers childhood place, adult character flashback to being jump scared by Pennywise as a child and adult character is then jump scared by Pennywise again in the present. Most of the scares do work, though, and the sheer quantity of effective scares warrants a high rating.

MS: Although Ben wanted to give a 5 rating in this category, I believe the storyline was reaching for aspects of the past that weren’t even there in order to make a successful plot, so the 4 was well deserved. Even after viewing the first “IT” in the past week, it was still hard to make connections and identify the characters and their individual plot lines throughout the story. What the movie lacked in a plot line, they made up for it with visual effects. Unlike Ben, I was unable to make connections from the first movie and the book, which I haven’t read. This added to my confusion in the beginning of the movie when the plot’s foundation was being laid.

BW: I absolutely loved the story of “IT: Chapter Two.” I’m not sure that I’ve ever seen a sequel connect itself so well to the original film; nearly everything in the second film manages to continue the story of the first film well while also expanding upon what we know about the characters and making the second movie its own film. Every character is consistent as an adult with their core character traits as a child, but adulthood also allows for the second film to explore new sides of each character. While the “collect a childhood token” plot was admittedly extremely cliché, it also made each character feel far more complex than in the first film. In adapting King’s book It, the movie makes excellent judgments about what parts of Pennywise’s lore to keep (the deadlights) and what parts to cut (the turtle and religious allegory). In my opinion (and not Molly’s), this movie was written nearly perfectly.

MS: In regards to the larger picture aspects of “IT: Chapter Two,” the cinematography and production have much more effect in the rating than the symbolism. From a cinematic standpoint, the effects and visual transitions were pleasing to the eye and some of the most seamless of any film that I have ever seen. Represented in a final boss form, Pennywise fights “the Losers” in a battle to the death as an extremely large insect. It’s not every day a person can see a couple middle aged people fight a creepy clown-bug.

BW: Just like in the first “IT” film, everything is very well produced. For a movie with so many absurdities popping up in jump scare scenes (an eye crawls across a table!), the CGI never broke my immersion in the film. There’s also a really intriguing meta-level plot going on, where some of the characters’ bad memories from the first film’s time period are shown as flashbacks in the second film; this mimics the film’s theme of rediscovering the past, even if it’s uncomfortable or scary.

MS: The iconic actor, Bill Hader, made the film going experience one of the best I have ever had. Despite the amount of cheaply made jump scares, “IT: Chapter Two” managed to scare my socks off and make me cramp from laughing so hard. With a nearly three hour run time, future “IT: Chapter Two” audience members could be turned away by the length. This movie is anything but boring, and the fact that it was two hours and 49 minutes made it more enjoyable to watch.

BW: Being in the theater for this film was a blast. It did an excellent job of making sure that the viewer always felt some form of strong emotion. When I wasn’t tensed up in my seat, I was laughing out loud at some of the banter between Richie and Eddie. The actors, especially Bill Hader, made the movie an incredibly enjoyable viewing experience. The runtime of two hours and 49 minutes looks long on paper, but while watching the movie the time flies.

MS:  Since it is not entirely up to Ben, this movie receives a dent in its so called perfect score. Excluding the plot holes created exclusively for the non-readers of the “IT” novel, the movie exceeded my standards in all categories. If you do end up seeing the movie, I recommend the following to ensure comfort through the lengthy duration of the thriller.

BW: Were it solely up to me, this movie would receive a perfect score. From the character interactions to the story to the scares, I thought everything was incredibly well done — and even if you don’t love portions of the story or some of the actors, you’ll still have a wonderfully enjoyable time seeing “IT: Chapter Two.”

Have a frightening Friday!