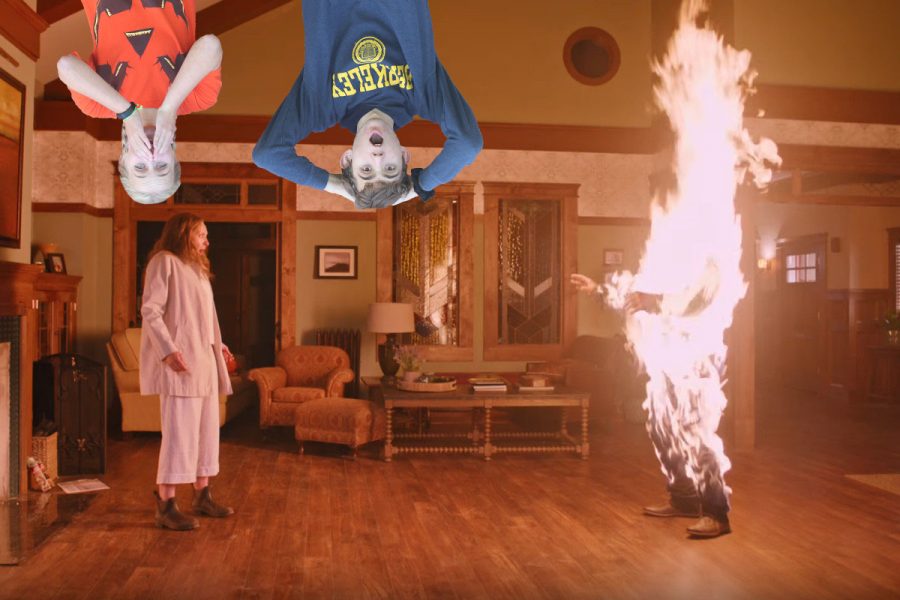 This week we reviewed director and writer Ari Aster’s debut film “Hereditary” (2018). The horror film, based in an underlying cult theme, can be confusing in the first watch for viewers. Only after really understanding the film we were able to thoughtfully review the movie.

In its most basic form, the story is about the Graham family, which ties to the supernatural via a cult which worships the Devil’s king Paimon. The movie follows the mother, Annie Graham, as she learns more and more about this cult; simultaneously, other cult members are preparing one member of her family to be possessed by Paimon. Annie’s family eventually falls apart due to the intervention of other cult members, and the film ends with her son being possessed by Paimon. This explanation, though, doesn’t do justice to the well-written roller coaster ride that this film’s plot is. For the first time in the history of Friday Night Fright, we’re going to recommend an outside source to fill you in on the film.

If you would like to learn more about the plot (with or without viewing the film) here is the video we viewed for a better understanding. It’s pretty complicated, so don’t feel bad if you miss anything on your first (or second, or third) watch.

Without further ado, let’s get to the review.

Molly Smith: The past six months has commemorated my maturity in the movies that I preview, a large focus being in the classic and horror film genres. This was one of the first horror movies that actually left an impact on me, initially viewing in February. The effect was not necessarily because it as scary, but because the uneasying aspect of the plot. The spooking aspect of plot consists of less of the cheap jump scares and more of the real life fears such as the what is lurking in the dark, what happens when you drive under the influence of drugs, death of family members and the unknown factors of life. So yes, it can be seen that this movie wasn’t as scary initially for a viewer, that aspect is not as important when such heavy or heart hitting fears are being played out before a viewer’s eyes.

Ben Wieland: This movie didn’t really rely on jumpscares to the extent most horror films do, so it didn’t keep the suspenseful energy up for the entire movie. However, what this movie lacks in cheap jumpscares, it makes up for with its genuinely unsettling moments. A week after watching this movie, I still sometimes see the scene where Charlie is beheaded in my mind’s eye. This movie also permanently conditioned me to flinch every time I hear someone click their tongue.

MS: The iconic writer and director of “Hereditary” Ari Aster has broken my scale of interpreting movies as a whole due to the complex storyline of ‘Hereditary’ that keeps the audience engaged, scared and ready for the next hard left turn. Towards the beginning of the film, while the basic ‘something is possessed’ storyline is being carried out, there is an underlying tone that confuses the audience while also flabbergasting them once the cult plot point is revealed.

BW: This movie’s story, in both its complexity and its intrigue, is brilliant. A whole lot about this movie really reminds me of Jordan Peele’s “Get Out”: both movies are the director’s first attempt at a feature-length film, and both have incredibly well-tied-together stories that are amazing reveals during the first watch and also allow rewatchers to catch new things every time they view the film. To be quite frank, “Hereditary” as a movie is much more sophisticated than almost any classic horror film. However, I do think the plot is almost too complex. The fact that this movie requires an explanation video even after viewing isn’t a good thing.

MS: While the other films that we have reviewed up to this point in time have received lower scores in this category, “Hereditary” surpasses any other horror movie that I have seen in terms of the deeper meaning/production combo. In the first viewing it is hard to understand the plot especially with the minute details that contribute to the plot in nearly every scene. Throughout, a symbol of Paimon is reoccurs in aspects of Ellen and her past. The most recognizable being a necklace that ellen gifted to annie before her death. The necklace could ultimately be the indirect cause of the demon, Pamion, manipulation of Ellen’s descendants. As Ellen is apart of this satanic group, it obviously affects the fate of her daughter’s family and thier inevitable doom. This storyline is not seen on the surface level, therefore making it a symbolic aspect of the film. In addition to the cult theme, there is an underlying tone of mental illness that ran throughout the family’s herediatal background allowing the audience to choose: is this family mentally insane, or are they being messed with with forces beyond their control?

BW: This movie introduces all kinds of genuinely unsettling concepts. Cinematographically, it does a lot of really creative things that definitely stuck with me long after the credits rolled. The aforementioned scene of Charlie’s beheading is one of the best scenes I’ve ever seen; a traditional horror would have vividly shown her head popping off her body and cut to a horrifying shot of her head immediately after the beheading, but “Hereditary” puts the viewer, both literally and metaphorically, in the driver’s seat. We experience the beheading from the responsible party’s position, watching Charlie’s brother slowly realize what he has done; only then does the film cut to the scary shot of her head. This scene is emblematic of the overall quality of this film, and the symbolism and deeper concepts explored bring a unique twist to the traditional family themes found in horror films.

MS: The combination of the plot and the writer’s ability to hold an audience’s attention in the transitions between defining moments made this movie one of the most interesting I had ever seen. In addition, “Hereditary” is not only off putting due to its horror movie theme, but it is also unintentionally funny due to the outrageous subject(s) at hand.

BW: “Hereditary” pulls off a difficult horror trick: it keeps the viewer’s attention without resorting to cheap one-liners or jumpscares. While some scenes near the end of the film are so absurd that it’s impossible not to giggle at them, the movie maintains a near-uniform suspenseful tone which kept my eyes glued to the screen. An unintentional benefit of the movie’s confusing plot is also that it requires extra attention just to pick up on the basics of what’s going on.

MS: Placing second in our top rated movies so far, “Hereditary” will always be a movie to spook me to this day with the hard hitting scare factors used and the directors ability to engage the audience without being too much of a mainstream horror film.

BW: “Hereditary” is consistently thrilling and a brilliant debut for director Ari Aster. The complexity of the plot and quality of the cinematography stick out from the field of horror movies and elevate this movie above the rest of the field.

Have a fantastic Friday!