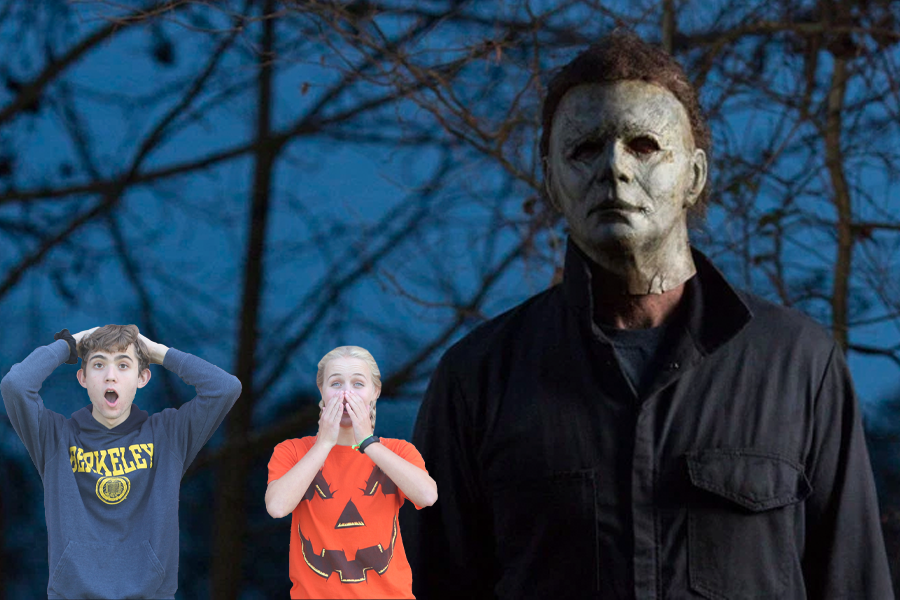 For this chilling Thursday Halloween evening, we watched the classic 1978 movie “Halloween.”

If you are interested in what the film is about, Molly references the storyline (with spoilers) in her section of the plot rating. There isn’t much of note going on  — just a pretty traditional “killer escapes asylum, stalks and murders teenage babysitters” horror flick.

Molly Smith: “Halloween,” viewed as a classic, is the movie that set up all of the behind the door, behind you, slow-walking and ‘plot twisting’ cliches. As my counterpart, Ben, wrote his review before I did, I now have minimal content to work with due to the lackluster ideas brought forth by the production staff for every category. In short, my review will be short to avoid repetition to appease the viewers. The fright factor of this movie was paired with drawn out suspense and a disappointing jump scare in nearly every scene, and that is all I have to say about that.

Ben Wieland: This review is difficult to write, because most criticism of this movie is a result of its popularity: parts of “Halloween” that later became formulaic were novel concepts when this movie came out, but today seem boring and overdone. Calling “Halloween” a stereotypical horror movie is like calling “Romeo and Juliet” a stereotypical romance — the movie doesn’t follow the cliches, it invented them. That being said, in 2019, “Halloween” simply doesn’t hold up as a horror film. Outside of the score and the opening scene, nothing in the film is especially scary, and even those scenes leave a lot to be desired. Michael Myers never conveys the sense of impending dread that a horror villain should, and his appearances simply aren’t scary. This film’s jump scares are actually better than the drawn-out scenes designed to build suspense, which is saying a lot, because the film’s jump scares are not well done either. I actually burst out laughing during one of the kills, because the image of Michael wearing glasses over the bed sheet covering his head was hilarious, and the actual scene of Michael murdering a teenage girl wasn’t especially well done. Acknowledging that “Halloween” is a classic horror film, it still fails at what a horror film should do best: horror.

MS: Substandard, inferior, second class and lifeless are just a few words to describe the quality of this plot. Despite the classicality of the film, the plot line, in my opinion, destructs the so called classic title of the film. The story starts with the young Michael Myers, killing his sister as a young child. The plot thickens when he comes back on Halloween night wreak havoc on his home town, hence the title: “Halloween.” The rest of the movie from then on is a waste of time for everyone, both the audience and the actors. The action, climax and resolution consists of the sluggish Myers killing off minor characters left and right, Jamie Lee Curtis’ character, Laurie, eventually discovering something fishy happening in the neighboring houses. I have decided that I am going to spoil the ending, which isn’t that big of a deal, since I am saving all of your time. In the end, Laurie fights head to head with the asylum escapee himself, harming him in a variety of ways. Then, a more minor character ends up shooting Myers, unrealistically sending him over the railing, supposedly to his death. Minutes later when said character looks over the railing, it is discovered that his body is missing, leaving the audience with the gut-wrenching feeling that the halloween killer will indeed come back again. I feel that this was a really cheap way to leave the plot open ended, the story eventually being milked into seven sequels and two franchise remakes, summing to 11 films in 40 years.

BW: This story, quite frankly, sucked. Every character acted as stupidly as humanly possible for the duration of the film and the resolution of the story was disappointing and ended on an unnecessary cliffhanger. Some of the characters in this film are mind-blowingly dumb, and if even one of them had any common sense, there wouldn’t have been a plot. Everything scary that happened during Michael Myers’s return on Halloween night took place within about one-fourth of a suburban block; somehow, not one of the main characters thought about running away. Dr. Samuel Loomis, Michael’s psychiatrist who knows firsthand how dangerous he is, elects not to even ask the police for real help in handling the problem. This is slightly understandable — however, the willingness of the police to cooperate with this non-investigation makes absolutely zero sense. I was also extremely disappointed with the lack of resolution to the story. Some movies that are clearly franchise films, like anything within the Marvel or DC universes, can end on cliffhangers. One-off horror films, on the other hand, shouldn’t leave unopened mystery boxes at the end of the film. Everything about the story of this movie was disappointing.

MS: This film was made in about two months, writing and all, with a budget of only $300,000 dollars. While the production and cinematography wasn’t ideal, the film’s classic aspects of horror contribute to the high rating in this category. Looking at the film with over 40 years of horror movies following the film, “Halloween” seems cliche and boring. But, the films today wouldn’t even have the complex scare factors and plots that they to day with the supposed cliches of “Halloween.”

BW: This category is where we decided to pay homage to the absolutely massive impact “Halloween” had on the horror genre. While the film does seem poorly made and uninteresting today, at the time it was an extremely groundbreaking film that invented the tropes that make it seem so unoriginal today. Nearly every other movie we’ve watched this year features an homage on at least some level to “Halloween” — in “Scream,” there’s literally a clip from “Halloween” running on a television during the end of the film. The score for the movie is also iconic and exceptional, if overused at points. While this film doesn’t have much individual merit, its colossal cultural impact cannot be understated.

MS: This movie is so difficult to watch, the viewers constantly being thrown off by audio levels, bad scripting and drawn out scenes. Most of these were off putting, but at times the dialogue between the characters was the best part; the actors were putting so much emotion into lines that were passionless when they were written. But by far the best part of the whole movie is the first scene when young Michael kills his older sister, the scene is both extremely comedic and cheesy, perfect for all horror movies alike.

BW: “Halloween,” while it really tries to keep the attention of the viewer, simply doesn’t create enough emotional stakes or fear to bring viewers in. There were really only two enjoyable parts of the film: the aforementioned enthralling score and Jamie Lee Curtis’s performance as Laurie. Curtis is the only character who’s really entertaining to watch in the film. During most of the other scenes, it feels like the movie is waiting to kill the characters off instead of attempting to make them interesting. For anyone considering watching “Halloween” on Halloween night, know that the only thing you should be afraid of is falling asleep of boredom and missing your curfew.

MS: In viewing the film it was hard to miss all of disappointing aspects of the movie and the elementary level of cinematography it obtains, but without “Halloween,” the horror genre would not be where it is today.

BW: While its importance to the genre cannot be understated, neither the scares nor the story in “Halloween” hold a candle to horror films today.

Have a terrible Thursday and a happy Halloween!