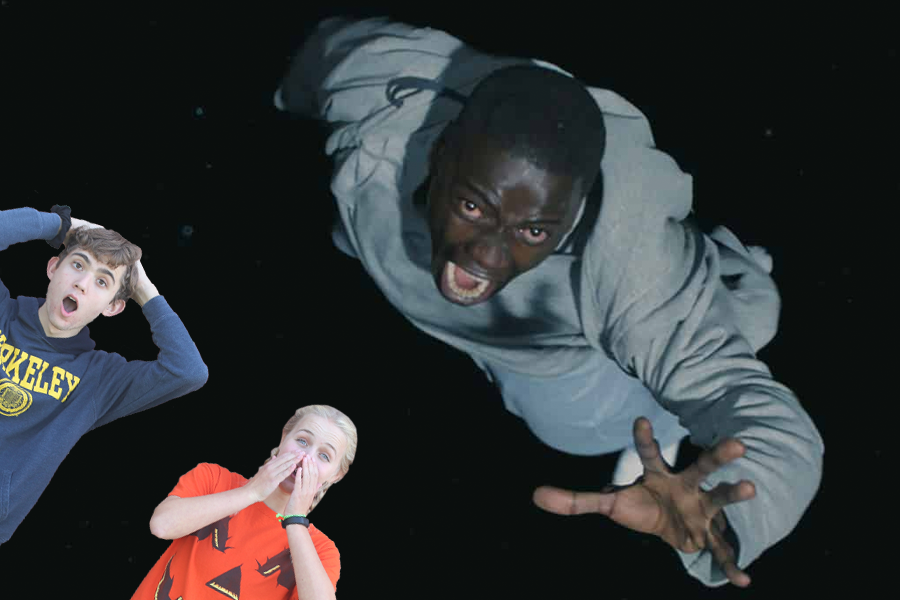 Friday Night Fright: Get Out

This week, we watched 2017 horror film “Get Out,” Jordan Peele’s first film as a director. In the film, black protagonist Chris (Daniel Kaluuya) is dragged by his white girlfriend Rose (Allison Williams) to meet her family. (SPOILERS) Chris suspects something is off about the weird behavior of Rose’s white relatives, and his suspicion is confirmed — the visit is an insidious plot by Rose’s family to hypnotize Chris and transplant one of their brains into his body. With the help of his friend and TSA employee Rod, Chris eventually escapes the horrifying family home, leaving behind a trail of destruction in his wake.

Without further ado, let’s get to the review!

Molly Smith: My second time viewing a Jordan Peele film, I was expecting nothing but the best. Already seeing some of the previews and such when the film initially came out in 2017, I wasn’t expecting it to be too terrifying. The success that the director had in impacting the audience all came from the unnerving tone of the first 20 minutes that sets the audience up for the rising action and climax of the film, which was more twisted and unsettling than I imagined. Despite this fact, the few scares that film possesses weren’t all that scary, but they sure did make me uncomfortable, adding to the integrity of the film overall.

Ben Wieland: My perception of scariness was a bit skewed because I’d already seen the movie, but my opinion on the horror aspect of the film didn’t change upon my second viewing. The few jumpscares that take place are placed well, and some of the psychological horror aspects of the film work very well — the first scene with the psychiatrist, where Chris is first hypnotized into the “sunken place,” is haunting. However, scenes that are designed to create a sense of uneasiness and creepiness instead convey a funny awkwardness. When Chris met Rose’s white family members, the scene was intended to be unsettling, but it actually made me laugh out loud due to how accurate the caricatures of her family were. This movie certainly takes you on an emotional rollercoaster, but very rarely is that emotion fear. As a byproduct of being a Jordan Peele film that’s more interested in social commentary and symbolism than jump scares and monsters, “Get Out”just isn’t that scary.

MS: Before viewing the film, I was led to believe through commericals that “Get Out” is a film about the horrors of this community of white people and how they entrap and torture (in an unknown way) the black people that visit their neighborhood. Boy was I wrong. Throughout all aspects of the plot of “Get Out,” Peele consistently allowed the audience to start to guess what was going to happen next. With this aspect, one would think that the plot would be predictable and unentertaining, but I was never once correct in predicting the large plot points since there were so many twists. A trademarked aspect of a Jordan Peele film consists of a nearly silent scene at the beginning to establish backstory and setting, paired with an extremely long wide shot of some minute aspect of the film that (sometimes) symbolises some aspect of the plot towards the end, covered with beginning credits. After the title screen and these ‘key’ scenes, there was not a point that I was disengaged. Even if the scene was viewed as boring, if the audience paying attention then they can notice the small details Peele uses to unveil the deeper meaning that connects the plot with symbolism as a whole. By the end, the audience is left flabergasted by a film they thought to be a movie with an artistic message discussing racism, when in actuality they are thrown into a world of hypnosis, (almost) slavery and kidnapping black people to steal their youthful bodies to live longer.

BW: The plot was, for me, incredibly engrossing. The first time I watched, until about thirty minutes before the movie ends, I had no understanding of how the whole story would connect. Then, during the final half hour, I went through a period of rapid mental connections where each individual scene, character choice and action made sense to me in a rush. Suddenly, I understood why Rose was so insistent that the cop didn’t record Chris’s driver’s license (she didn’t want anything connecting her to Chris’s eventual missing-persons case). I got why the groundskeeper sprinted around the lawn after dark (his mind was taken over by Rose’s grandpa, who lost to Jesse Owens in the Olympics; of course he wouldn’t give up his running hobby. The moment where everything in the film clicks, comes together and makes sense is so perfect that it completely justifies the hour of confusion that’s needed to set it up. There were also some incredible Jordan Peele story twists; the ending scene, where Chris’s friend Rod arrives in a police car, is Peele at his best. The scene brings together levels of dramatic irony with social commentary and a satisfying ending to the film. The puzzle-esque nature of the plot is executed to near-perfection.

MS: From previews, I was led to believe that this is an artistic sort of film trying to make a bold statement about society, after viewing I have realized that I am incorrect. There was an underlying theme of racist acts or comments towards the white people. Rose’s family acts almost normal when they arrive at her childhood home for the weekend, making slightly racist and extremely uncomfortable comments along the way. The next day there is a shindig where many members of the community come, they cringely made african american culture references, which was cringy because they were white. Later, I realized that these were because they were controlling the previously kidnapped black people and possessed some of their memories. Anyways, there are many connecting factors that Ben goes over below. Besides that, every single shot had such an artistic take on it and it was very visually appealing. Overall, the production of “Get Out” was some of the best I have seen in a horror movie.

BW: With the benefit of a second viewing, I picked up on just how much social commentary, irony and symbolism Jordan Peele managed to cram into “Get Out.” Sometimes, the irony is a joke within the film — there are so many instances where the actions of Rose’s family epitomize dramatic irony, where Chris doesn’t understand that their motivation is to determine how good his body will be once taken over. Other times, the joke is on the viewer in a particularly emotional form of social commentary. Peele plays with tropes and social issues to evoke emotion masterfully. The police car scene at the end of the film is a perfect example of this; when we see a police car pull up to the scene of Chris, a black man, standing over Rose, a white woman, our knowledge of film tropes about cops and of police brutality in real life tells us that this won’t end well for Chris. This makes the twist of Rod stepping out of the car extra impactful, because it subverts tropes not just within the movie but within our own minds — Chris has defeated both the fictional villain of Rose and the very real villain of police brutality and mistreatment of black men. The film is littered with just normal symbolism, too. While they’re easy to miss on the first viewing, things like the fact that Chris, in an inversion of slavery, picks cotton to free himself become obvious. As Peele’s directorial debut, this film is clearly a passion project, and the thought that was put into everything shows. The cinematography, and specifically shot framing, does an excellent job of setting the tone and unsettling the viewer. The actors are top-notch all around. There’s no part of this category that “Get Out” doesn’t knock out of the park.

MS: I would say the best part of the movie was watching it in a group setting. There were parts that were confusing so Ben could explain and the other members of our viewing party joined in with lots of jokes about the cringy white families and guesses on where the plot was going to go next.

BW: “Get Out” follows in the footsteps of its horror predecessors like Scream by opening with a scary scene before the title to set the mood. However, “Get Out’s” scene is extremely lacking and unfeeling. Instead of sucking me into the film, it made me apathetic and lowered my expectations for the rest of the film. Outside of that massive disappointment, though, this movie was incredibly enjoyable. Some scenes are just awkward enough to be funny, and the other scenes are incredibly plot-rich and interesting.

MS: Overall the plot and discomfort set up by the writers of “Get Out” appeals to a well rounded thriller. The only negative points about this film was the lack of fright, but being in the mystery/thriller genre, it is hard to have it all.

BW: “Get Out” as a horror film is a bit disappointing. As a movie that tells an interesting story, has things below the surface to uncover on repeat viewings, offers interesting commentary and perspectives on social issues and keeps the viewer intrigued nearly the whole time, it’s outstanding. It would’ve been hard for Jordan Peele to come up with a better directorial debut.

Have a fascinating Friday!