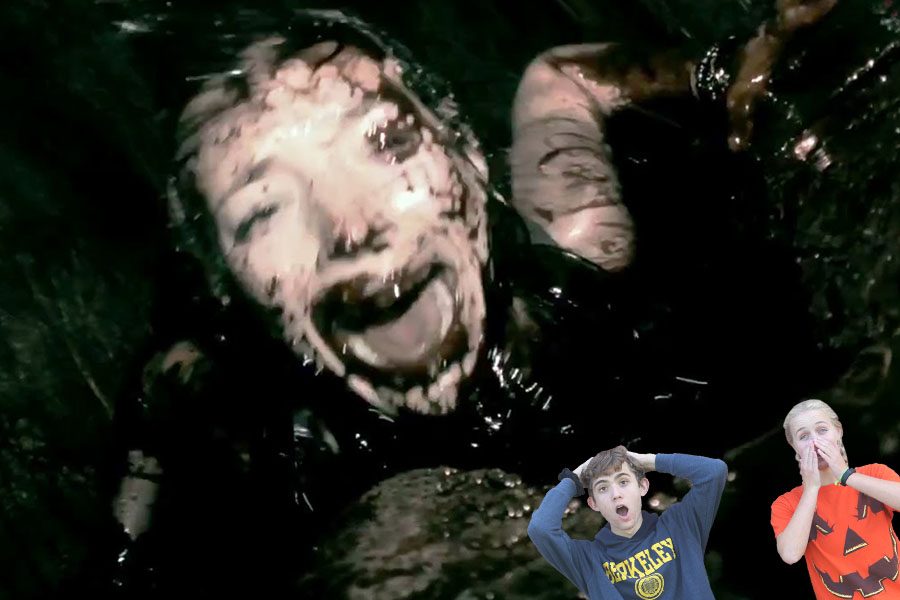 Friday Night Fright: As Above, So Below

This week we reviewed the thriller mystery “As Above, So Below”(2014). The film, accessible via Netflix, follows Archaeologist Scarlett Marlowe in her Indiana Jones/Tomb Raider adventures through the catacombs in France in search of Nicolas Flamel’s philosopher’s stone. Through the first person point of view style, Marlowe and her crew descend deep into the catacombs, each seemingly going through their own personal hells.

What is difficult for the audience to discover in a first viewing is that indeed they are all descending through the eight layers of hell. The movie earned more structural integrity (in Molly’s opinion) after viewing this explanation video. It can aid the audience to fully understand the deeper meaning and symbolism that was occurring as the underlying theme of the film.

Molly Smith: Even after the nine Friday Night Fright reviews I’ve posted and the many other scary movies I have seen in my life, by far “As Above, So Below” is the scariest movie I have seen. The crowded tunnels of the underground cemetery paired with the in-scene cameraman creates a sense of presence for the audience, allowing them to experience all of the visual scares that the crew experiences, along with the numbness of not knowing what is 10 feet in front of them or behind them. The success in the suspense category is paired with the film’s ability to properly execute a jump scare; while basic (what is hiding in the dark? What is over your shoulder?), every intended jump scare plus others that may not have meant to managed to petrify my every time.

Ben Wieland: “As Above, So Below” is engrossing. I’m not sure if it’s because of the underground setting or the film’s excellence at building suspense, but everything that happens from the moment the protagonists enter the catacombs onward makes it impossible to look away. The lighting is used masterfully to build suspense, everything about the tunnels is unsettling and the jump scares are actually effective. The mythology and lore of the plot also did an excellent job of adding to the tension and scariness of the movie, even if they didn’t really stand that well on their own.

MS: Later in this review, my counterpart goes on about the lackluster quality of this films plot, while on the contrary, I believe the plot and the way all the points tie together are done exceptionally well. Ben states that the most consistent part of the film is the stone and its selective powers, when in actuality this serves a real purpose. The stone supposedly has magic powers that can heal etc but, at some points the stone ceases to work. Confusing the other characters, this is to no surprise after Scarlett realizes the power of the stone is not in the stone itself, it is held within the fingertips of the people who believe in the power of the stone and what it stands for.

BW: For as entertaining as this movie is, I think the plot is definitely the weakest part. There are a lot of interesting story ideas and themes at play, and I think some of them work well — Scarlett’s Indiana-Jones-esque quest for the philosopher’s stone is probably the strongest point of the movie. However, sometimes the different plot strands — especially those involving the pasts of the main characters — become hopelessly entangled. Two particular story elements are also especially poor. First, the inconsistency of the philosopher’s stone; the magical rock seems to only have its healing powers when the plot demands it. Second, the plot armor of Scarlett; the movie spends eighty minutes building up the invincibility of demons, just for Scarlett to stiff arm one during the film’s climax.

MS: Underneath the surface of the tunnel thriller that is “As Above, So Below,” there is a plot line hidden underneath using the sins of every person in Scarlett’s crew. The deeper and deeper the group treads on into the catacombs, there are weird things going on. Phones are ringing, pianos are plucking, water is turning into blood and cars are catching fire in these spooky underground grave tunnels and everyone is dying for some unknown reason. For those who truly comprehend the message of this film. It is all about redemption of one’s sins. Those who didn’t own up to their past faults and confess ended up dying, while those who did survived and climbed back out into the streets of Paris just as they entered.

BW: Just like the  plot, the messages of this film can be interesting at times, but don’t mesh as well as the film needs them too. The religiousness of the film, which is a sort of modern-day retelling of Dante’s “Inferno” at times, clashes with the rest of the film regularly. Everything outside of the themes that fits in this category is well-executed. The sound design is excellent and really contributes to the feel of the movie, and as I mentioned in the fright factor category, the lighting is critical to the horror of the film. The found footage style, while I think it’s overused in general, works well with this film.

MS: As this was the most horrifying movie I had ever seen, the 8 minute drive home in the pitch black summer night from a friends house after seeing “As Above, So Below” marks one of the most on edge drives and lingering horror experiences I have ever had. Proceeding that experience, I look back on the movie not as enjoyable, but scarring.

BW:I wouldn’t say I had an enjoyable time watching “As Above, So Below,” because I spent a good portion of the last hour of the movie paralyzed with fear, but it was certainly a memorable time. I think that’s good enough to justify an excellent rating.

MS: Despite the need for an explanation video, “As Above, So Below” is the most enthralling film that I have seen in the horror genre.

BW: “As Above, So Below” is confusing at times, but still manages to tell a compelling story in a terrifying way.

Have a fiendish Friday!