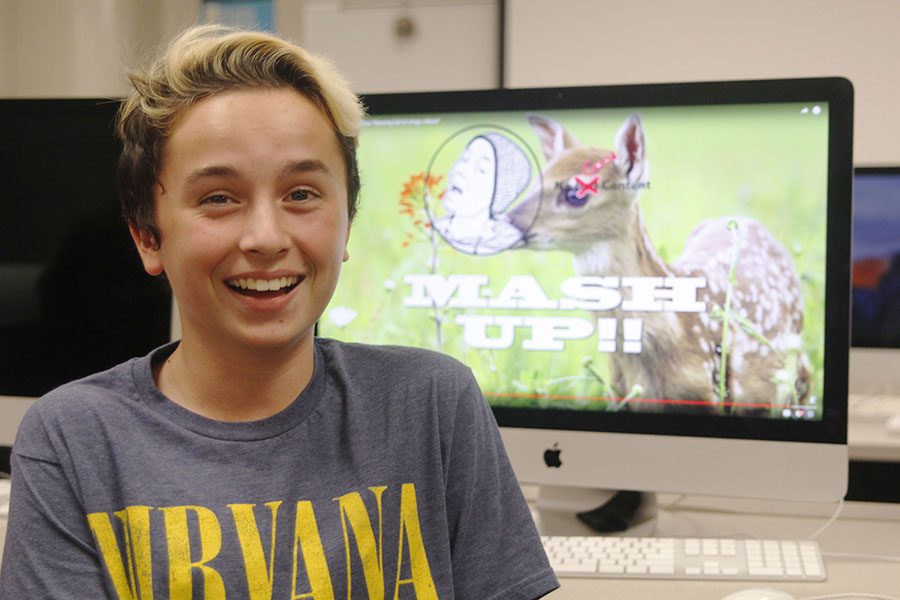 With a video from his YouTube channel pulled up in the background on Tuesday, Oct. 18, freshman Aidan Thomas smiles in journalism teacher Dorothy Swafford's classroom. "I like [YouTube] because I can share my videos," Thomas said. "Even if nobody watches them, I can still post them and I feel good that some people will [get to] experience my content."

Since he was seven years old, freshman Aidan Thomas has had an interest in filming, editing and sharing videos. He created his YouTube channel, Aidmation, shortly after discovering his passion.

Thomas discovered his love for creating videos while hanging out with his friends on a normal day.

“I was with a friend and we got scooters and [rode them] off this ramp that my dad made me. We fake crashed them and pretended we were dead, and then we’d sneak around the camera [acting] like ghosts and I posted that to YouTube,” Thomas said. “[I] deleted all those [videos], because we made a ton, but that’s how I got interested in filming.”

“[When] he started doing YouTube, I was already doing YouTube so we [decided to] make videos together,” Endsely said. “Sometimes we’ll just sit around his room and come up with video ideas. I’ll sleepover at his house and we usually film in the middle of the night when nobody will interrupt us.”

Thomas now works with more of his peers on his videos since starting his YouTube channel seven years ago.

In order to learn more about filming and editing, Thomas uses a variety of resources.

“I watch a lot of YouTube videos, ironic, but that’s what I do,” Thomas said. “I also read my dad’s books. He has books on Adobe programs and I go on the internet and read [information]. It’s self-taught basically.”

Hertog appreciates how much effort Thomas puts into improving his craft.

“He puts so much work into the camera angles,” Hertog said. “He does so much research about different cameras that are going to give him different effects.”

I always pick up my computer, pull up [Adobe] Premiere and think [about how] I wish I had a video to edit.”

Along with teaching himself, Thomas is currently enrolled in AV Productions with journalism teacher Dorothy Swafford to advance his skills.

“[Swafford] shared a lot of copyright information, information on interviewing people, ideas for videos and [she taught me about] three second shots. I had no idea about that rule, you can only have three seconds of the same shot then you’ve got to switch it up or people will get bored, so [learning] that helped to improve [my skills],” Thomas said.

Over the years, Thomas has seen a positive change in his films.

“I definitely can say that [my videos] have improved from the ghost videos because there was no editing in that and it was also very dark [footage], you couldn’t really see anything,” Thomas said. “Now, my videos have lights and good quality and actual audio; it’s definitely way better than it used to be.”

Although editing a video can take anywhere between one to three hours, Thomas enjoys the process.

“It never really feels tedious or annoying to me, I always pick up my computer, pull up [Adobe] Premiere and think [about how] I wish I had a video to edit,” Thomas said. “I moved recently, so I haven’t been able to film anything. I’ll look and my computer [and] Premiere’s empty; it makes me sad that I [don’t] have anything to edit.”

Publishing his videos is a great feeling, according to Thomas.

“When I finally get [a video] posted I feel pretty accomplished,” Thomas said. “I’ll go to bed normally, cause I [usually] post it around midnight. I wake up and there’ll be like 20 views. It just feels nice; 20 people saw something I worked hard on.”

Thomas would like to pursue a degree in filming, if he is able to.

“I feel if I can film people and capture an [idea] that I made up, I feel a part of a production, even if it’s a small, short film,” Thomas said. “I’d also like to be an actor, but if I didn’t get that I’d love to film. It’s just an interesting thing, people will see more [films] than read books and you can actually see a whole story.”

Hertog supports Thomas’s filming interest, as well as his curiosity of having a degree in that field.

“[Film is] a lost art [because] not a lot of people, at least my age, have really talked about it,” Hertog said. “They like watching movies, but not the whole filming aspect.”

Ultimately, Thomas is glad that filming is a defining characteristic of his personality.

“If [filming] wasn’t a part of my life, I’d be out of a hobby,” Thomas said. “I wouldn’t know what to do. I don’t fit in sports; I can act, but filming is my main [passion]. I’d feel pretty empty without it.”