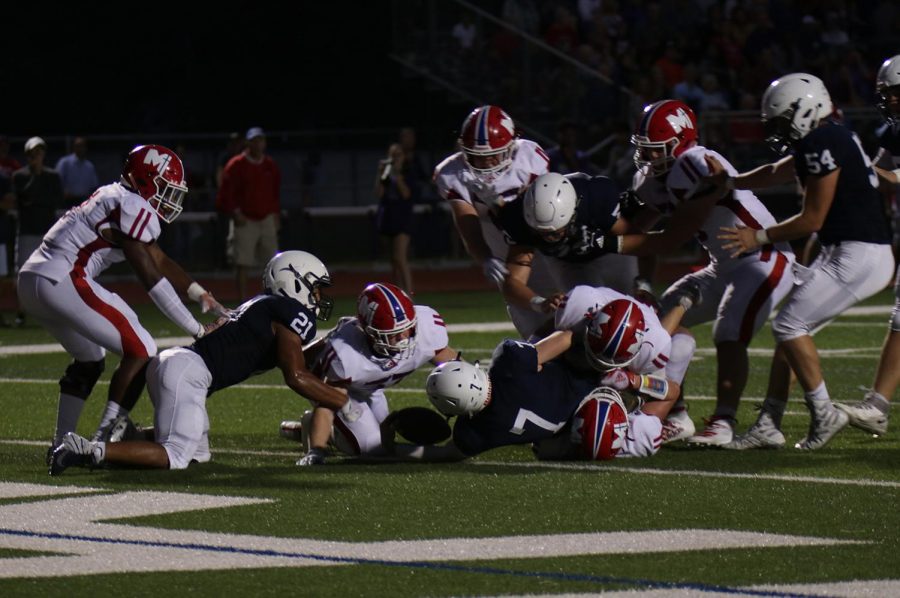 Junior quarterback Cooper Marsh extends his arm over the goal line for a touchdown, cutting the Jaguar deficit against Bishop Miege to seven points.

Despite erasing a 23-point fourth quarter deficit, the team couldn't pull off a win in the Homecoming football game Friday, Sept. 20 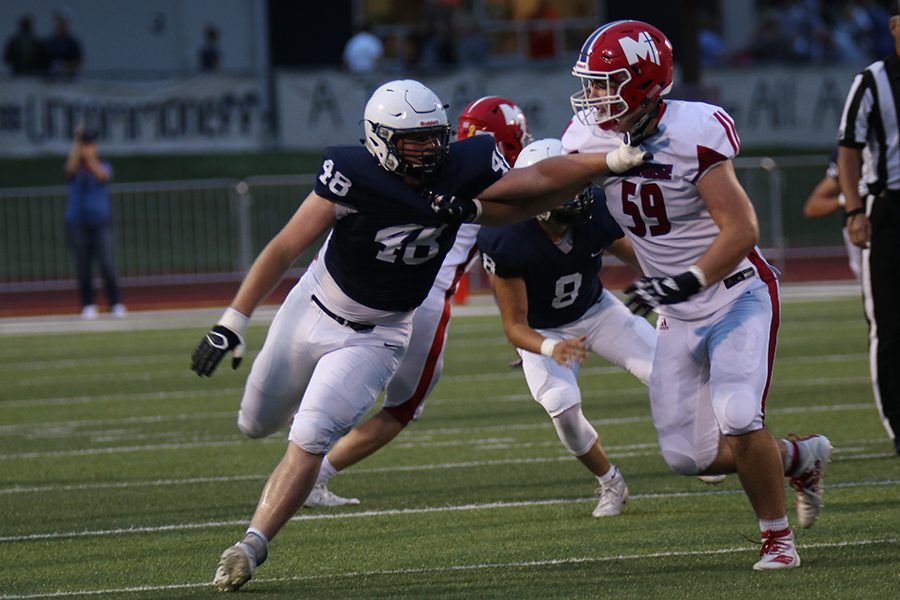 The Mill Valley football team fell to Bishop Miege 42-35 in the Homecoming football game Friday, Sept. 20. The team couldn’t recover from their slow start — Miege put up 14 points before the Jaguars converted a first down — despite a fourth-quarter comeback attempt spearheaded by junior quarterback Cooper Marsh, who finished the game with three rushing touchdowns.

The team came back from a 23-point deficit to tie the game with 41 seconds remaining, only for Miege wide receiver Daniel Jackson to return a squib kick for a touchdown and give Miege the lead for good.

Two Miege skill position players proved too much for the Jaguar defense to handle: running back Brison Cobbins, a senior being recruited by the University of Nebraska, finished the game with 21 carries for 180 yards and two touchdowns; Jackson, a senior verbally committed to the University of Minnesota, also added five receptions for 68 yards, a rushing touchdown, a receiving touchdown and a kickoff return touchdown.

The Jaguar offense started slow, but eventually picked it up and put together a season-high 476 yards of total offense. Marsh led the offense, completing 14 of his 29 passes for 225 yards and three interceptions and carrying the ball 22 times for 111 yards and three touchdowns. The offense put up 23 second-half points, more than doubling their first-half tally of 10.

Junior wide receiver Ty Reishus, who had the longest play of the game for the team with a 61-yard second quarter reception, explained the second half offensive outburst.

“Nothing really changed for us coming out of half. We just knew that everyone had to be bought in, believe in ourselves and play our hardest football,” Reishus said. “We also dialed up some plays on the fly, and used a trick play that helped us come back to tie the game.”

The team’s 35 points were the most they’d scored all season. Reishus also outlined the general offensive strategy coming into the game.

“We wanted to come out early and establish the run, and play fast and physical football,” Reishus said.

The Jaguar offense started the game with two three-and-outs, and Miege capitalized: a 10-yard rushing touchdown from receiver Daniel Jackson and a 4-yard touchdown carry by Cobbins gave Miege a 14-0 lead just six minutes into the game.

On the team’s third drive of the game, junior running back Quin Wittenauer jump-started the team’s offense with a 27-yard carry to the Miege 38. Wittenauer went down with a right ankle injury four plays later, but Marsh finished the drive off with a 3-yard touchdown carry, cutting the lead to 14-7 at the end of the first quarter.

In the second quarter, the Jaguars were able to string together a few more drives, but two turnovers — a Marsh interception and fumble by senior running back Tyler Green — and a blocked field goal attempt kept them to only three points. Both Cobbins and Jackson scored touchdowns for Miege in the quarter, and the Jaguars went into halftime trailing 28-10.

Miege opened the second half with an 80-yard touchdown drive, capped off by a 29-yard touchdown run by quarterback Tim Dorsey. After that, the defenses began to exchange big plays.

Marsh ran in a four-yard score on the first play of the fourth quarter, cutting into the Miege lead and making the score 35-19.

Four minutes later, senior linebacker Carson Caldwell came up with the team’s second interception of the game and Marsh punched in a four-yard touchdown three plays later. After Green caught the two-point conversion, the Jaguars cut their deficit to one score: 35-27.

It’s a one-possession game, and the Jags trail 35-27 with seven minutes to play!

After the defense forced a punt, the Jaguar offense started from their own four-yard line with four minutes remaining and an opportunity to tie the game with a touchdown and two-point conversion.

On fourth-and-10, Marsh completed a 37-yard pass to senior wide receiver Kendrick Jones to put the team on the Miege 18-yard line. On the next set of downs, Marsh converted a fourth-and-five to the Miege one, then Green punched it in for a score. Marsh caught the two-point conversion on a trick play to tie the game at 35.

The Jaguar celebration was over as soon as it began. On the kickoff after the game-tying score, Jackson returned a squib kick for a 86-yard Miege touchdown to put Miege ahead for good.

After the heartbreaking loss, the team is looking ahead to next week, according to Reishus.

“It’s always tough to lose a close game that nobody thinks you have a chance in, but a loss like that does a lot for our team,” Reishus said. “All we [have to] do heading into Aquinas week is, correct some of our mistakes in practice, perfect the things we do best and then go win on Friday.”

Before exiting in the first quarter with a right ankle injury, Wittenauer carried the ball eight times for 42 yards. Filling in for Wittenauer, Green carried 18 times for 93 yards and the game-tying touchdown.

Jones led the team’s receiving corps with eight catches for 107 yards. He also completed a pass to Marsh for a trick play two-point conversion to tie the game. Reishus’s one 61-yard catch put him second on the team in receiving yards.

The team will take on St. Thomas Aquinas at home next week on Friday, Sept. 27.