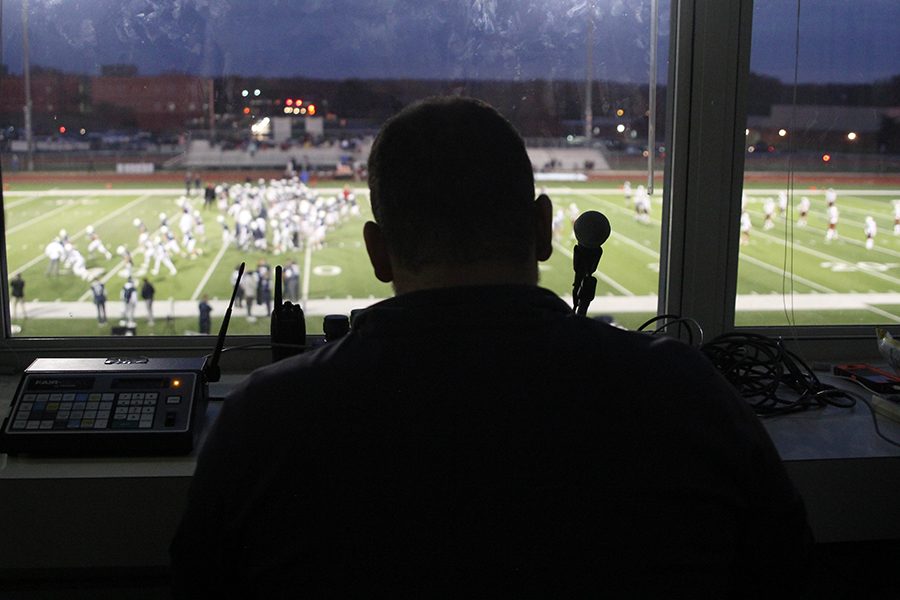 Before the game starts, announcer, Nick Peirce recognizes both football teams as they run out onto the field on Friday, Nov. 5. “The most important part of my job is watching the game closely,” Pierce said. “While teams are stretching, I try to get skills players names I would likely be saying the most.”

Sitting among the crowd of coaches in the press box, football announcer Nick Pierce prepares to speak on a Friday night. Pierce, a seventh grade teacher at Mill Creek Middle School, has been announcing for the football team for the past four years.

Pierce, who started announcing at games in 2015, believed that accepting the position was a good way to remain in contact with his former students.

“When I was asked to be the announcer for Mill Valley, I thought of it as a great opportunity to stay connected with students I had in class and also coached at Mill Creek,” Pierce said via email. “I am aware of my soothing voice, but never considered it as something for announcing.”

Athletic director Jerald VanRheen’s previous experience with Pierce led him to believe that Pierce was the optimal choice for an announcer.

“I knew that [Pierce] worked in the district, so I called him and said, ‘hey what do you think about [announcing]?’ and he said ‘well, I will give it a shot,’” VanRheen said. “He is just one of those guys that is willing to try something new.”

According to senior football player Ryan Bauer, the way Pierce takes time out of his schedule for the team is admirable.

“[The announcers] do not have to be there, they choose to do it and I think that is really cool,” Bauer said. “They give up their own time because they want to.”

Although Pierce believes that he does not have much of an impact on how he affects the surrounding community, VanRheen disagrees.

“When he shows up at a game, he cannot walk to the press box without being stopped 15 times because there are kids there that he has coached or he has taught, so they know who he is,” VanRheen said. “I think he embraces the idea that he has helped some of those kids along the way.”

Overall, Pierce believes that the most important aspect of his job is to reach the crowd with crucial announcements from the school or sponsors.

“Players, family, and fans often count on my announcements to explain what happened on the field,” Pierce said. “The days leading up to the game, I get information that needs to be announced mostly from VanRheen, but also information from sponsors.”

Bauer believes that Pierce contributes more to the experience than by only announcing what is taking place on the field.

“The announcers are the voice of our program on Friday nights,” Bauer said. “They are the ones everyone hears, [whether they are] at the game or live near the school.”

Overall, VanRheen believes that, over the years, Pierce has embraced his role more.

“He continues to get better [at announcing], the first time he did that in 2015, not that is was not good, but you could tell it was something new for him,” VanRheen said. “He has gradually gotten better, and he really is good at managing all of the things an announcer has to do.”

In preparation for the game, Pierce will converse with fellow coaches about updates and gather other needed information.

“While the teams are stretching, I talk with the visiting team’s coach and try to get players names who I would likely be saying the most,” Pierce said. “After that, I just wait for the team to run out of the Jaguar head.”