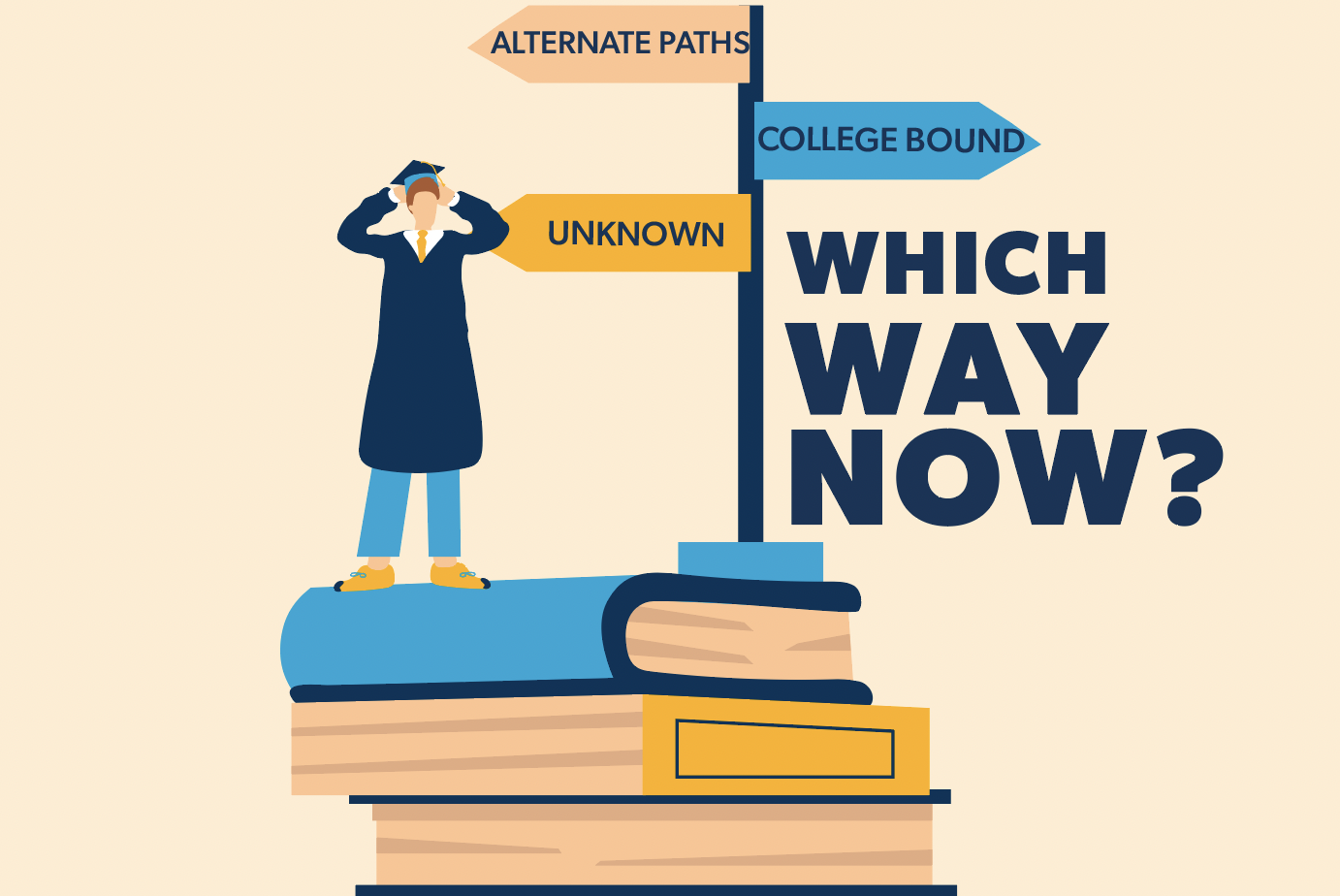 Facing pressure from all sides, students share their experiences with post-high school planning

Students plan different routes for life after high school, including college, the military, trade school and the workforce

As college application season arrives for seniors, many are forced to confront what’s coming for life after high school. While for some students college is a no-brainer, others may find themselves questioning the benefits of attending a 4-year university and considering other options like entering trade school, the workforce, or the military. When making that decision, many students face self-imposed pressure to know what comes next. These are only exacerbated by the financial, academic and familial pressures that come with choosing a path. Dealing with these issues first-hand, students share their stories about navigating their futures.

Many students at Mill Valley plan on attending a four-year college, and though this is the norm, external pressure can be persuasive in determining a student’s post-high school decisions.

For college-bound junior Sarah Anderson, the pressure isn’t just to decide on a college major, but also to decide on the career she wants to pursue.

“I feel like there’s a lot of pressure to decide on a career choice very early,” Anderson said.

While Anderson has not chosen the exact pathway she would like to pursue in college, she has narrowed down her options to dental medicine or engineering. One way she was able to do this was through various career and college quizzes in middle school Pathways classes.

“Quizzes kind of help me see all of the jobs within the field that I want to go to or within a field of interest,” Anderson said.

Every student at Mill Valley is familiar with the concept of a career quiz, especially with weekly Xello and IPS lessons. However, many students are not aware of the uses that these programs might have to their planning.

School counselor Chris Wallace encourages students to look at the larger picture of their results on Xello quizzes and other programs. Wallace finds that these ideas can help students narrow down their interests.

“There’s themes that can be picked up on the results, and that can sometimes guide students down a certain path or direction to pursue,” Wallace said.

The search for inspiration is not limited to online quizzes and IPS lessons, but can also be found in family members, real-world experiences and simply trying things. Senior Amit Kaushal, who wants to attend the University of Dallas to major in software engineering, gains his inspiration from his father, who owns his own business.

“My dad is an immigrant so he did everything from the ground up and that inspires me a lot to one day be able to do things like him because if he can move to a whole other country and do that, I know I can do it too,” Kaushal said.

Similarly, junior Caroline Alley was inspired by family and hopes to attend the Air Force Academy. Alley was motivated to go to the academy instead of a typical university in order to more efficiently pursue her goal of being a fighter pilot.

For Alley, the school’s attempts to bring in military representatives was helpful, but most of her decision was made through individual research.

“When military recruiters would come in I would speak to them, so that did help while I was at Mill Valley, but most of the information I got was self found,” Alley said.

While Kaushal is well-decided on his path after high school, that was not always the case. Initially in his career search, Kaushal planned to pursue medicine, but experience working with geriatric patients at JCCC persuaded him otherwise.

“I first thought I was gonna go into the medical field,” Kaushal said. “I tried it out and it wasn’t for me. I’m glad I recognized that now instead of actually going into pre-med in college because I saved a lot of money and I saved that time.”

Both Anderson and Kaushal found that the best way to figure out their plans was simply to try things. Kaushal advises that by trying and experiencing different options, students can find the things that interest them and be confident in their planning decisions.

“I think more people should go out and experience things because if you go into a field where you don’t like the job, it’s going to be really hard for you so it’s better for you to do it early on and see if you don’t like it,” Kaushal said.

Although they are surrounded by college-bound peers, there are many students at Mill Valley who plan to pursue their interests in other fields such as military, trade school or entering the workforce.

Alley, who has found her path to the military through family, has always wanted to join the armed forces.

Also considering an alternate path, senior Jack Melvin is looking at trade school, though he is ultimately undecided on his plans. Similar to Alley, Melvin’s family has supported his interests in trade school.

For junior Jack Schaffer, baking has been a passion which he has already begun to pursue where he currently works at Strang Hall. In addition to working, Schaffer hones his craft in his free-time to prepare himself for the job market so he can be able to do what he loves.  Shaffer plans to continue working in baking after high school, and even potentially open his own restaurant.

“I like the creative options [baking] gives me and I’m actually really passionate about it,” Schaffer said. “I do a lot of research. I do a lot of home baking. [It] just kind of grows. Doing something that I’m passionate about personally, I think that’s one of the meanings of life, really.”

According to Schaffer, having already chosen and begun working toward a career makes the required IPS and Xello unimportant.

Additionally, Schaffer finds the efforts the school puts in toward preparing students for college to be at a higher priority than preparing them for alternate paths.

“I think high school really prepares students for college but not real life, and real life and college are not the same thing,” Schaffer said.

This real-life preparation is critical for students like Alley with her Air Force career. In order to enlist in the program she is looking at, she must keep in mind enlistment restrictions and requirements including academic prerequisites in high school and a congressional letter of recommendation.

“Having made that decision now helps me do the things that I have to get done before I can get to that level,” Alley said.

Even with all of the options for future plans, many students are still unsure what they want to do after high school which can create a new array of stressors.

Though Melvin is considering trade school, he is still unsure of what he wants to do after high school because of his many interests. Additionally, Melvin feels social pressure to have chosen a future path already.

“A lot of the people and friends around me already know what they’re doing,” Melvin said. “A lot of people have plans early on [and] they want to be a teacher or a nurse. I just never really had one solid interest.”

Though Anderson has found a path now, she agreed that it seems as if everyone knows their plans early-on, even going back as early as middle school.

“In seventh grade I felt like everyone around me kind of knew what they wanted to do and I didn’t, so that was very stressful,” Anderson said.

Despite the uncertainty Melvin feels, he reassures fellow students that though it can be helpful, college is not the only option. He has also found that many of the current career planning activities and events the school offers have helped him to narrow his plans down.

“I feel like the school does talk quite a bit about what our future career paths could be; We do Xello and we talk with our counselors,” Melvin said. “So I feel like they do try and help us plan for it.”

Wallace echoes this thought, telling students that there are still ways to find the right path for them. Even if it may seem too late, there are always options available, Wallace reassures.

“There’s still all sorts of resources and opportunities available to students who start their college journey later on after high school rather than right away,” Wallace said.