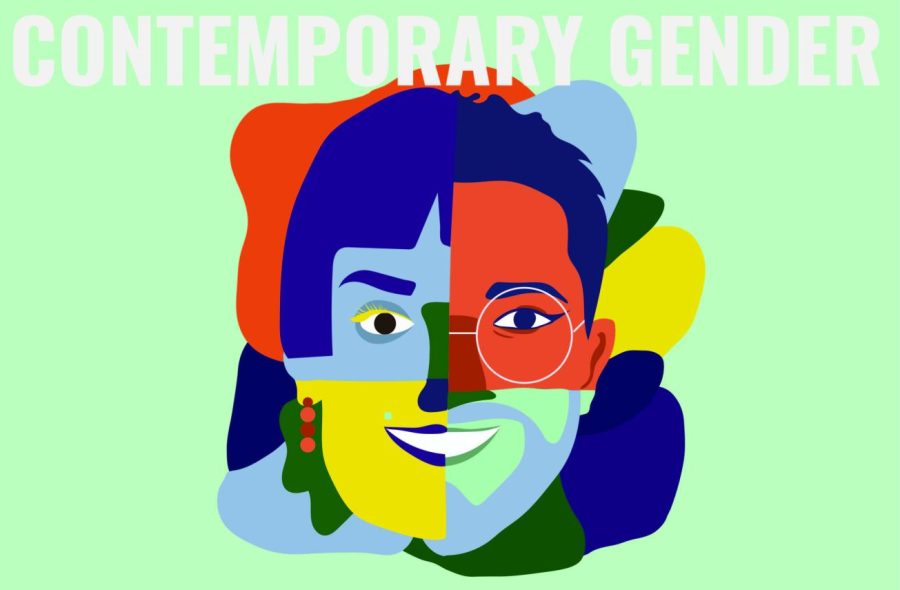 Though gender can be a confusing topic, people should do all they can to respect and accept teens' journeys

Though there are some frequently used labels such as ‘nonbinary,’ ‘transgender’ or ‘genderfluid,’ these terms aren’t all-encompassing. Hearing different perspectives can help people empathize and understand, as there is no one way to experience gender.

Sophomore Olivia Peters uses the labels nonbinary and genderfluid to describe herself and uses all pronouns for self-referral. She also has a unique way of defining and experiencing gender.

“For me, I would define gender as the internal relationship I have with masculinity, femininity, how those things interact in society and just how I view them,” Peters said. “Personally, I view gender in a really weird way, like sets of colors and aesthetics and sounds.”

Senior Jackson Raven, who uses he/they pronouns, believes that he should be able to express his own unique identity. 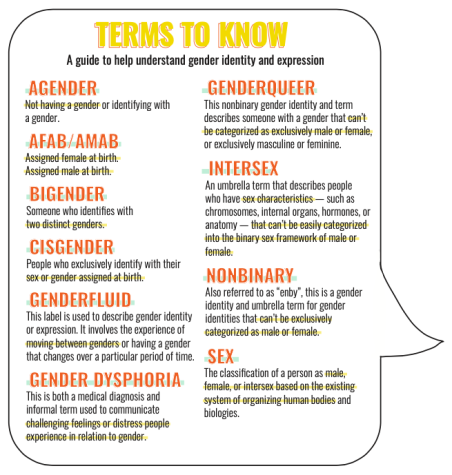 Freshman Samuel Maniquis, who was assigned female at birth, explains how his experience with gender began in middle school.

“[It’s] confusing,” Maniquis said. “I first started questioning my gender when I was in sixth grade. Before I heard about it, I thought maybe going by a girl was not right. I heard about all these names and stuff that I could feel more comfortable with. I think in sixth or seventh grade, I went by she/they and then that just progressed.”

Science teacher Landra Fair explains how her perspective on gender has evolved over time.

“As a teacher, I originally would have said, ‘you are female if you produce eggs and you are male if you produce sperm’,” Fair said. “However, my view of that has changed. Since I’ve met more people that don’t identify as either of those, I don’t know how to define gender.”

Freshman Cora Jones identifies as non-binary and uses they/them pronouns. Though medically transitioning can play a large role in the transgender and nonbinary experience, Jones feels that readjusting the way they present themself was more important to them.

“I didn’t really go through a very big transition because I already had short hair,” Jones said. “I think what changed the most was how I dressed because I definitely wear a lot more masculine clothing now. I still wear feminine clothing but I think it’s just what I like.”

In contrast, an anonymous transgender junior, who was assigned male at birth , explained how she finds both medically and socially transitioning important. Additionally, she feels as though coming out was relieving.

“I am medically transitioning right now,” the junior said. “Socially transitioning is kind of newer, but I’ve been out for a while now. The majority of the time I felt like this weight had lifted off me, like [coming out] did something good. Then, sometimes, whenever they are referring [to me] as male it doesn’t bother me, but it is like a weight being pushed back onto me. But it’s OK if you mess up sometimes.”

Although people are becoming more accepting of different peoples’ experiences with gender, many teens still struggle with acceptance within the school system.

For Maniquis, informing the district of his transition was not hard, but getting district students and staff to recognize his pronouns is more difficult.

“I’ll be honest, the main difficult part is that teachers don’t usually ask your pronouns,” Maniquis said. “They ask your name or nickname or you say your preferred name, but they’ve rarely ever asked for my pronouns.”

Fair attempts to solve this problem in her classrooms by giving students an opportunity to share their preferred pronouns.

“At the beginning of school, I had all my students fill out a get-to-know-you form and I asked them what gender they preferred and what pronouns they preferred, so I would know,” Fair said. “So I know some of the students feel comfortable with me because I asked that, but I don’t know if they’re like that with their other teachers. I do not think in the past I had any students that identified differently than their birth gender, and this year I have several.”

“Gender dysphoria is different for every single person who has it,” Jones said. “But for me, I get it the most when I’m being put into something that it genders me so having to be in girls PE creates a lot [of dysphoria], and then on Skyward it says I’m a female. And I’m a swimmer, so swimsuits are a pretty big thing for me. That creates a lot of gender dysphoria.”

Similarly, Maniquis explains how he experienced gender dysphoria at school and how it affected him emotionally, specifically with pools and PE.

“[I experienced gender dysphoria] in the girls’ locker room. I don’t go there anymore,” Maniquis said. “There are gender-neutral bathrooms right next to it. I got pretty big dysphoria there, and going to pools. Those were pretty big problems. It hurt, not physically hurt, I didn’t cry, but it felt like I wanted to.”

In today’s world, much progress has been made on the road to acceptance but there are still many necessary advancements to be made.

Society often treats those with “non-traditional” views on gender with disdain and representation in the media needs to be improved.

The anonymous junior explained how her insecurities can negatively impact how she feels about her gender identity. “I wish I was not so insecure about things,” the anonymous junior said. “I just wish it was normal, I guess not a big deal because sometimes I don’t even know I’m trans. Half the time I just feel like I’m normal.”

For Peters, it’s important that others know their experiences with gender are valid, no matter how different they may seem. As someone who has gone through it, they try to create a safe space for those who may be questioning their gender.

“When I talked about not needing to know everything about your own gender and to be willing to explore it and feel comfortable with yourself, I have found that it’s helpful to people to be able to have that kind of conversation,” Peters said.

For Jones, if the media itself were a more inclusive place, there could be better representation. In its current state, though, being out publicly is accompanied by a lot of fear.

“[Good representation of gender non-conforming people is] not out there as much as it probably should be,” Jones said. “You don’t see a lot of, especially with genderfluid, people out there who post or express themselves a lot. I feel like a lot more people, if social media was a little bit better, could be out there.”

In contrast, Maniquis believes that those who do represent gender non-conforming people in the media help others gain a better understanding of different gender identities.

“I like having [gender non-conforming representation in] the media because it brings it up more to people [and makes them] more aware of what’s considered rude and what’s not,” Maniquis said.