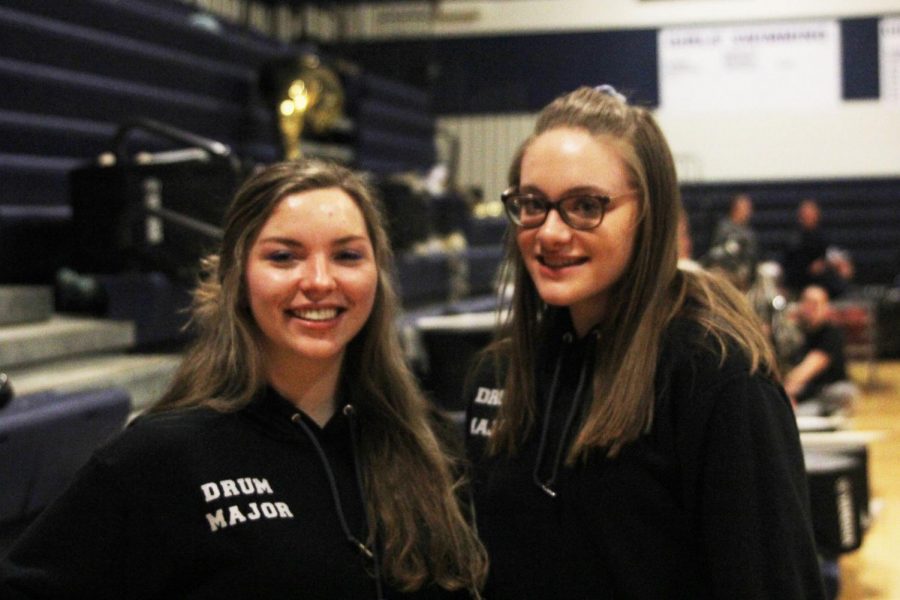 Junior drum majors Kaleigh Johnston and Amber Guilfoil stand in front of the band section during the girl’s basketball game on Thursday, Feb. 21

Communication and trust are important parts of band leadership

It starts out with a whistle. Then you feel the vibration of the drums. You see the band walk in. You feel the heartbeat of the drums. All of this is a result of hours of practice and strong leadership.

According to senior drum captain Zach Bossert, band only works when everyone is on the same page. To achieve that, Bossert not only leads the percussion section, but is responsible for initiating the cadences while the band marches on and off the field.

“Communication is key,” Bossert said. “Finding out when everyone can rehearse and if we need extra practice times … makes sure everything gets done.”

In order to get good results, the three drum majors must lead and conduct in unison to keep the band on beat. Junior drum major Kaleigh Johnston sees this leadership as a team effort.

“You have to lead by example because if you are leading a group of people and you are not willing to do what they are doing, it is not leadership, it is a dictatorship,” Johnston said. “[It is] servant leadership, you have to serve the people you are leading because that is the best way to [get something done].”

For junior drum major Amber Guilfoil, being a leader in band helped her to gain the courage to lead.

“I observed the previous leaders and what worked for them and what didn’t,” Bossert said. “From those observations, I was able to learn how I should lead this group and how I should teach them.”

For Johnston, leadership is all about relationships.

“The whole reason I am drum major is because the band … trusts me enough to do this,” Johnston said.

Guilfoil and Johnston will take over the positions of senior drum majors next year after senior Marah Shulda graduates. With these changes, Guilfoil is hoping that the band can continue its success.

“I just hope that we can work together and have the same style so that it doesn’t confuse the band,” Guilfoil said.

In addition to gaining leadership skills, Johnston has learned how to overcome new obstacles

“As a leader I am … there to help people,” Johnston said. “It’s been really nice to be drum major because you meet so many people outside of your own section and … I have learned a lot about fixing instruments that I have never even touched before.”