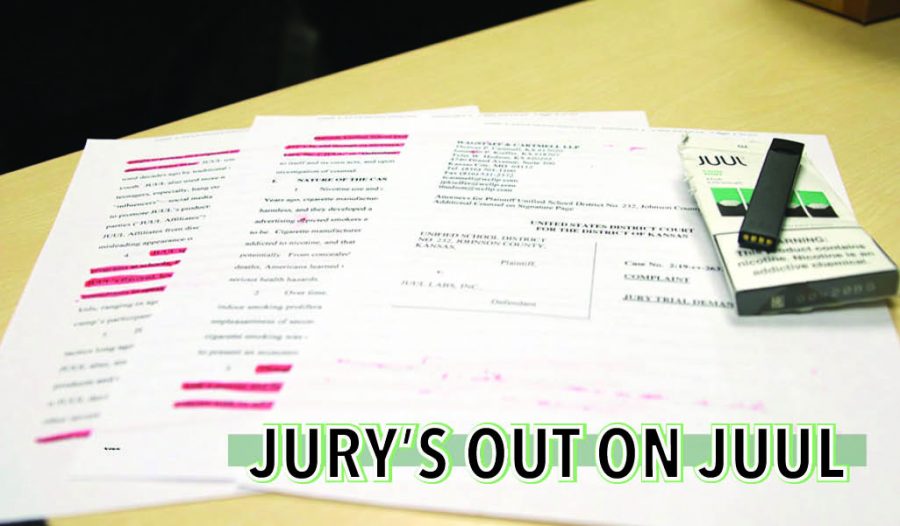 The district joined a lawsuit against JUUL led by Olathe Public Schools.

After Olathe Public Schools filed a lawsuit against JUUL Labs, Inc. on Monday, Oct. 7, USD 232 followed in their footsteps. The USD 232 Board of Education authorized legal counsel to file a lawsuit against JUUL, a manufacturer, distributor and seller of cigarette alternatives known as e-cigarettes or vapes.

The district published information regarding why they decided to file a lawsuit against JUUL Labs, Inc. on their website. In the statement, the district said they took action “in response to the increasing number of students using JUUL products at school…[which] has caused an ongoing interruption to the learning environment.”

“Within the last three years, USD 232 saw a significant increase in the number of students possessing and/or using e-cigarettes on campus,”  Harwood said in a press release available here. “Parents and students have asked us to help them address this trend.”

This increase in vaping has been drastic — there were only three vaping-related suspensions in the 2016 school year, while in 2018 there were 55. The district is exploring solutions like new vaping education programs and  awareness campaigns for parents, which they hope to eventually pay for with compensation from the lawsuit.

Within the last three years, USD 232 saw a significant increase in the number of students possessing and/or using e-cigarettes on campus.”

The lawsuit presented evidence that JUUL Labs, Inc. marketed to teenagers and argued that the company created an epidemic of underage vaping in America.

According to the lawsuit, “JUUL used advertisements eerily similar in scheme and content to those used decades ago by traditional cigarette manufacturers before they were banned for targeting youth.” The district argues that they did this by marketing Juul via social media influencers, utilizing peer pressure as a tool to force students into vaping.

One sophomore female, who wishes to remain anonymous because of the consequences of admitting to vaping and will be referred to as Gloria, believes that JUUL targets underage kids like her.

“JUUL Labs, Inc. knows that teenagers buy JUUL illegally, so they try to shape their marketing around that,” Gloria said.

The lawsuit also claims that via social media, JUUL was able to create an effective idea among teenagers that vaping would increase their social status.

Gloria said she felt intense pressure from her peers to conform to her surroundings and start vaping under the assumption that if she didn’t vape she would be seen as lame.

“I’ve become distant from some friends who don’t involve themselves in Juuling,” Gloria stated. “I was afraid that if people found out that I didn’t participate in vaping then they would think I am uncool which led me to start Juuling.”

The lawsuit also claimed that JUUL’s conduct as a company created an epidemic of underage vaping in the United States, which Olathe Public Schools claimed “[forced their district] to spend significant time, money, and human resources to combat this nuisance to try to preserve its core mission of educating students.”

If any settlement is reached from the lawsuit, “the intention of the Board of Education is to use those funds to offset costs related to abating the issue, education programs regarding vaping, and any future costs the district may incur to assist students concerning vaping,” according to the district website.

Many students are supportive of the district’s decision to file a lawsuit against Juul Labs, Inc., including a senior girl who remained anonymous due to fear of social consequences for her opinion and will be referred to as Maggie.

“I believe the lawsuit against JUUL is valued and has just cause. It is something that has affected our school and has been put on the shoulders of administration,” Maggie said. “However, I sadly don’t think any changes will be made.”