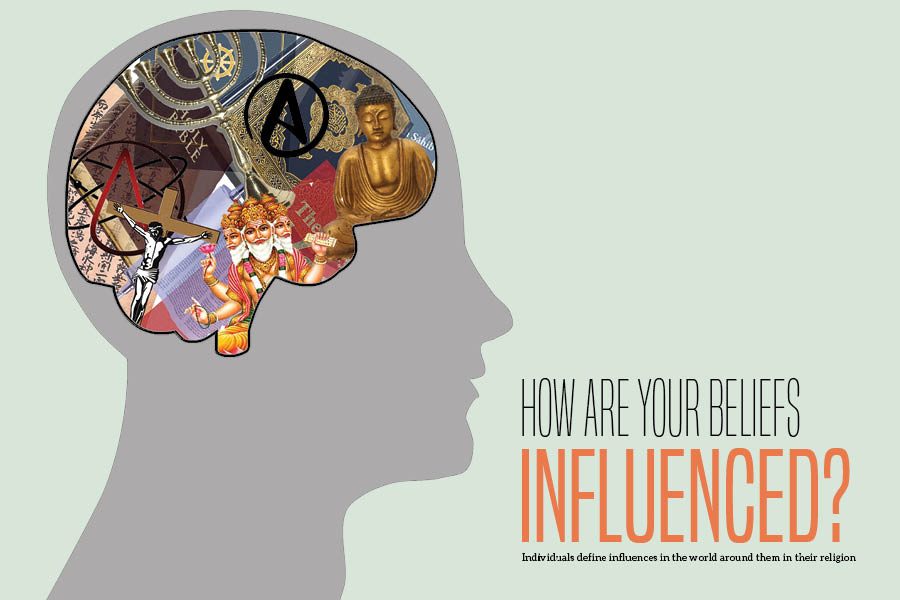 Most students believe their peers have similar religious views that typically center around Christianity. In fact, in a student survey of 691 Mill Valley students, 501 students said they were Christian.

However, even with this statistic, other students participate in other religions such as Islam and Judaism. Also, according to the survey, 532 students get their beliefs from their parents, as well as a strong faith in a higher being. 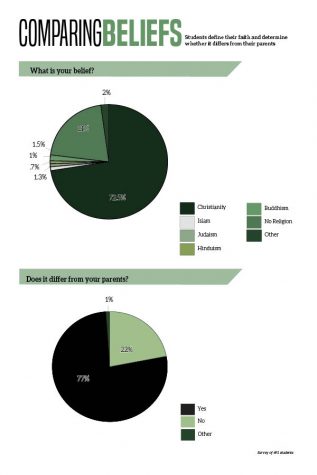 However, freshman Noah Hookstra chooses to be an atheist rather than participate in the religion his family believes in, which is Christianity.

“Both my parents and my family [are] Christian and I just couldn’t buy into it,” Hookstra said. “I base everything that I believe in off of evidence and scientific fact.”

On the other hand, senior Kaylie McLaughlin’s religious beliefs do stem from those of her parents, who had Christian beliefs but didn’t begin going to church until McLaughlin was in first grade.

“I’ve kind of grown up in a family that believed in God and believed in Jesus but I had never gone to a church before and that changed everything,” McLaughlin said. “When I was nine I got baptised with my twin sister and I started practicing it.”

In a school setting, World Geography classes have a unit on world religions, covering the basis of different faiths. Mill Valley also offers student-run clubs made up of students who share similar faiths.

Social studies teacher Michael Bennett teaches world religion in his World Geography classes and believes that the teaching of religion goes into the regions the faiths originated from instead of simply the beliefs that stem from them. 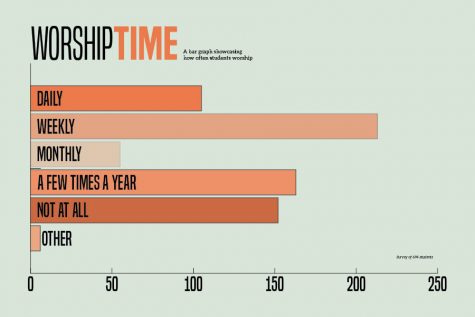 While history classes teach religion, junior Shanu Kaushal, who practices Hinduism, believes that the curriculum  can be improved to make the students more well-rounded and include deeper explanations of various religions.

“We mostly focus on Christianity and I do want to learn about other religions besides Christianity, maybe Islam and Judaism,” Kaushal said. “There’s so many different religions out there that I wish they had a class focused on [more religions]. General knowledge is always a good thing.”

Outside of the classroom, students have gotten involved in clubs such as Club 121, an organization made up of students who practice Christianity and want to grow in their faith together.

Since becoming a part of Club 121, McLaughlin’s perspective regarding her peers has changed and allows her to interact with students that share similar religious beliefs.

“[Club 121] has mostly impacted how I see other people, and Club 121 is a really good way to be in a position in school to reach out to others that maybe don’t believe what I do,” McLaughlin said.

Even though he isn’t apart of a club for the faith he practices, junior Ozan King still feels free to practice his respective faith of Islam at school without much judgement.

If I do tell them they don’t really care. That’s what I love about Mill Valley, that we’re a really accepting place.”

“Most people that I know, I don’t even really tell them [about my faith] and we just get along fine,” King said. “Even if I do tell them they don’t really care. That’s what I love about Mill Valley:  we’re a really accepting place.”

Religion also plays a role in everyday society, whether that be on a worldly scale or locally within the student body.

Kaushal believes that religion should be about being a morally good person but says that many of the world’s conflicts spawn from religious disagreements.

“There are those that use [religion] and abuse it and that’s what happens with wars in history,” Kaushal said. “So even though it’s well-intended, it can have a negative effect.”

Comparatively, King said practicing a religion should bring peace and serenity to societies, rather than violence.

“The reasons [for practicing a religion] aren’t, ‘Oh let’s kill someone, let’s hurt someone, let’s be discriminatory,” King said. “No, it’s, ‘Let’s be peaceful and let’s pray. Let’s just worship with what we have.’ I like that.” 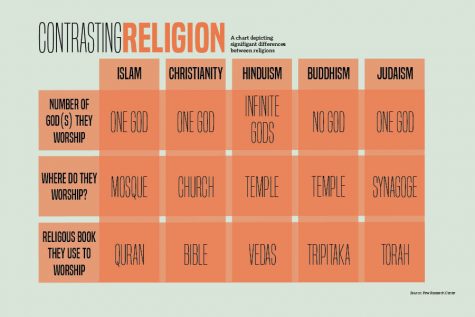 Even with all of these conflicts due to religion, McLaughlin strives to treat people equally and uphold the values of her faith while doing so.