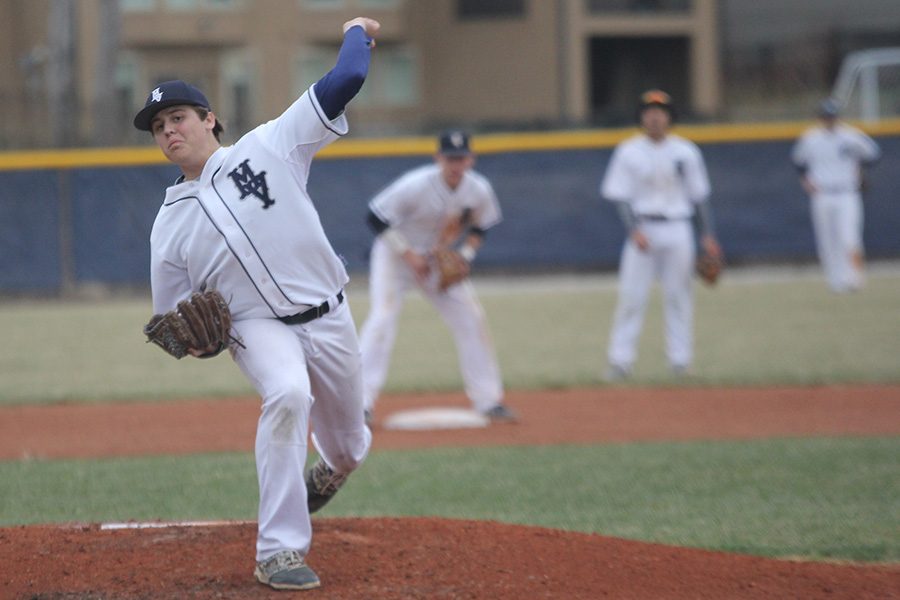 Tossing a pitch during a game against SMW in the 2018 season, senior Nolan Sprague works to strike a batter out on Friday, March 23. After pitching five innings, Sprague led the team to a 4-1 victory.

Gallery|17 Photos
By Mia Thomas
Tossing a pitch during a game against SMW in the 2018 season, senior Nolan Sprague works to strike a batter out on Friday, March 23. After pitching five innings, Sprague led the team to a 4-1 victory.

The community has come together after senior Nolan Sprague was paralyzed from the waist down after a diving accident on the night of Thursday, Aug. 9.

Sprague is currently out of the ICU and is now in the pediatrics wing at Overland Park Regional Hospital following the accident. He is undergoing physical therapy and will be moving into a rehabilitation facility, according to updates from the Facebook page “Team Nolan” and posts on CaringBridge.

After pulling Sprague from the neighborhood pool where the accident happened, senior Quinton Hall called emergency dispatchers upon realizing the severity of Sprague’s injuries. Hall, a close friend of Sprague since middle school, has been present by Sprague’s side in the hospital every day since the accident.

“I’m upset and kind of angry … that it happened to Nolan,” Hall said. “It’s still shocking to me … I would have never thought it would have happened.”

After word spread about Sprague’s accident, the community has rallied behind the family in several ways. A prayer vigil was held in Nolan’s name on Saturday, Aug. 11 at 10 a.m. at the school baseball fields.

Lacey Rios, a family friend who helped organize the prayer vigil, was grateful for the outpouring of support for the Sprague family. Rios estimates that between 800 and 1,000 people showed up to the vigil.

“We thought there’d be a lot of people there, but it was just overwhelming, the support from the community,” Rios said. “Baseball is family, and it showed that day 一 it was just amazing.”

Several fundraising efforts are currently underway to aid the Sprague family financially in what will be a long journey through rehabilitation. The largest fundraiser, a GoFundMe campaign, has raised $108,780 of its $150,000 goal as of Thursday, Aug. 16.

In addition, a fundraiser was held at the school to collect donations, as well as sell “Team Nolan” t-shirts and stickers on Wednesday, Aug. 15. According to head baseball coach Jeff Strickland, every t-shirt, in all sizes, from the original batch was sold out. However, shirts will be available for purchase from Strickland on Monday, Aug. 20.

The dedication and support from the community is invaluable, according to Strickland.

The baseball team is dedicated to helping the Spragues in the aftermath of this accident, according to Strickland.

“We are going to help the Spragues with any upkeep of their house and that kind of thing,” Strickland said. “Our main role is just to help them out in any way possible and to just support [them] financially with whatever [it] may be.”

According to Hall, the baseball team was impacted not only on an individual level, but as a whole as well.

“It’s affecting a lot of people, knowing that he is a big part of our team and is … a leader,” Hall said. “[He’s] a huge part of the program that we’ve lost now, which everyone is realizing.”

“I know that all prayers would help, I know his family is going through a hard time, but the community has helped so much with the support and the prayer,” Hall said. “Everyone is just being really amazing right now with all the love and showing support for Nolan. It just feels good when everyone is there.”